Chee Chin Khor
the pagoda on the Chao Phraya

Chee Chin Khor is a religious and benevolent foundation for disseminating Buddhist books on morals and prayers as well as conducting charitable programs funded by public donations to help the poor.

The eight-story pagoda on the grounds of this foundation is a prominent landmark along the Chao Phraya River. I’ve passed this stretch of the river several times and have often wondered about this Chinese temple.

But it's more than just a temple, let’s find out more about this architectural attraction on the Chao Phraya. 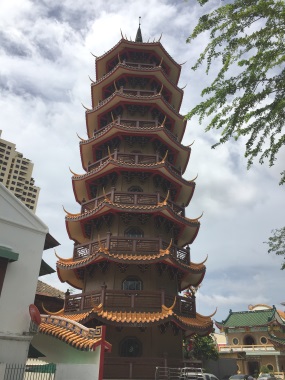 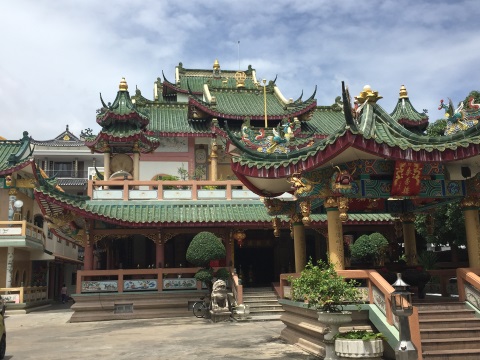 It was first established in 1952 in Wat Samannanam Borihan in Saphan Khao off Phitsanulok Road. HM King Rama IX presided over the official opening on 25 February 1953.

Later it moved to new premises in New Charoenpol Road and again to Chulalongkorn Soi 9 in Pathumwan.

It was only in the 1990s that the foundation bought its own land on the current location to build a temple and administration office. It was registered as the Chee Chin Khor Moral Uplifting for Benefit Foundation. The temple complex was officially opened by HRH Princess Sirindhorn on 27 April 1993.

The latest addition to the complex is a building behind the temple. It was officially opened by the Supreme Patriarch on 13 June 2018.

Besides disseminating Buddhist publications on morals and prayers, the foundation distributes rice, blankets and free coffins to the needy and subsidises student lunches at school. It also arranges for cremations of unidentified and unclaimed bodies. 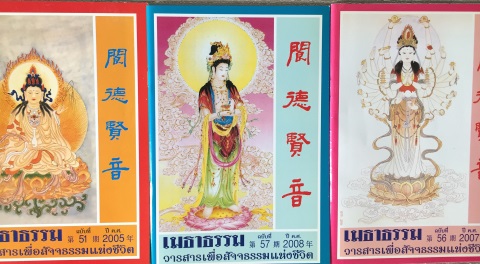 Here’s an overview of the temple complex taken from the top floor of the pagoda. 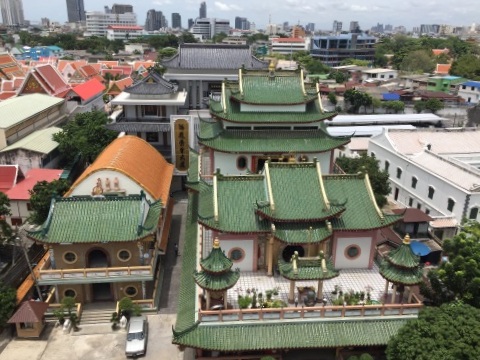 The temple stands on the foreground to the right. Note that on the second floor there are two separate buildings.

To the rear is the new building that was opened om 13 June 2018. It’s linked to the temple building by an overhead bridge on the second floor.

Here are some of the attractions in the temple grounds by the river. 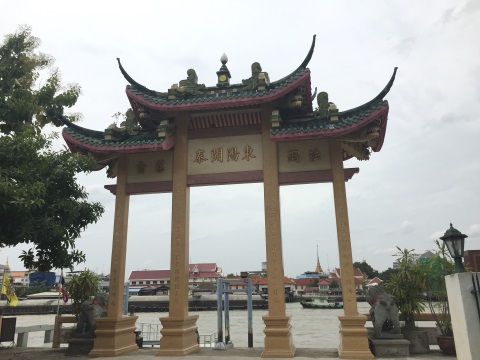 The words above read, “Peace and serenity in the eastern sun*”
*Eastern sun – eastern region or East Asia 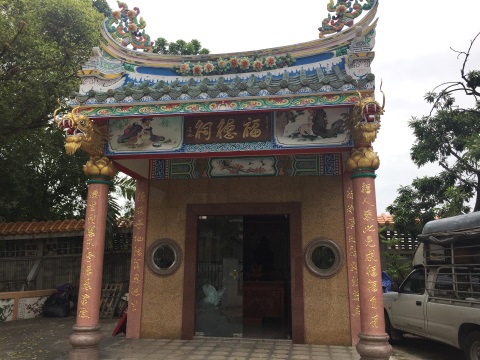 Shrine for the Blessings of Good Morality 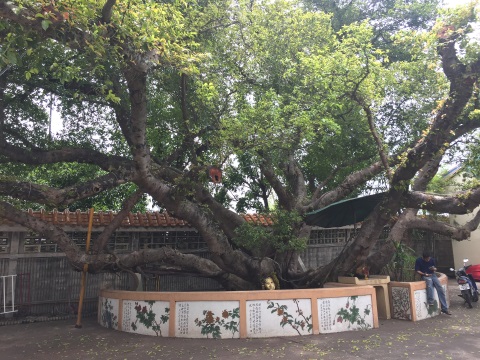 The wide spreading boughs of the ton sai (banyan tree)

The temple has an altar on the first floor and a spiral staircase to the right winds upstairs to an eerie cave-like structure on the second floor. 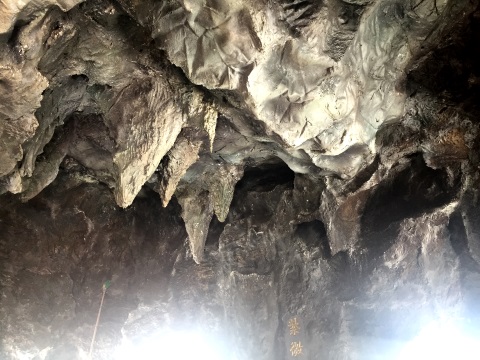 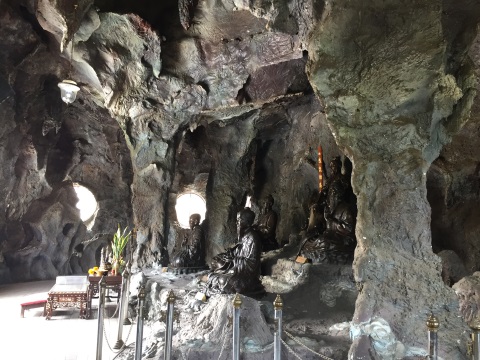 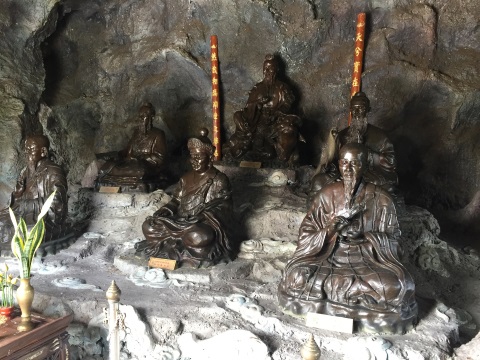 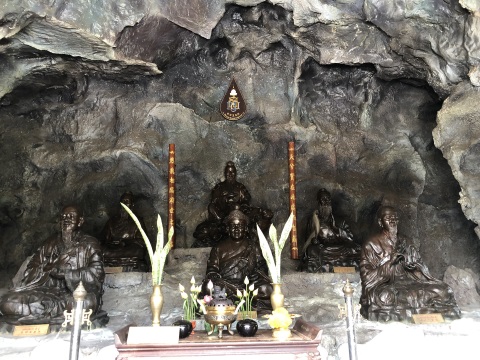 The cave on the 2nd floor of the temple 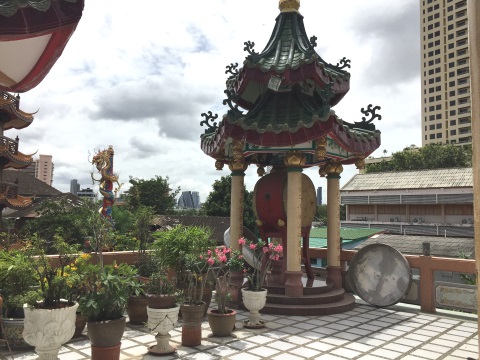 Out in the open courtyard

Walk around the temple to the rear where there is a pedestrian bridge crossing to the new building. The new building, which was opened on 13 June 2018, consists of a display area on the second floor, a prayer room on the third and the fourth floor opens to a courtyard.

Besides the displays on the second floor, there is an ornately decorated door leading to a room. I didn’t know then that the board above the door translates to “Temple for seeking entrance to heaven”. 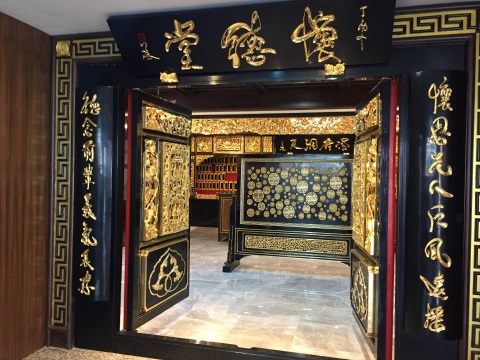 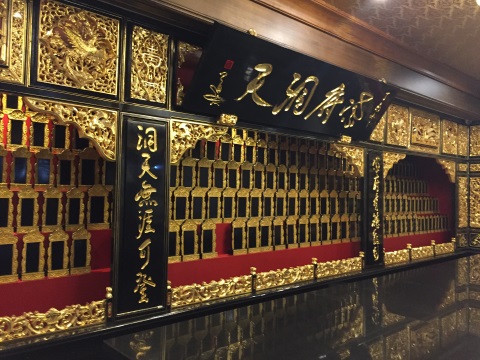 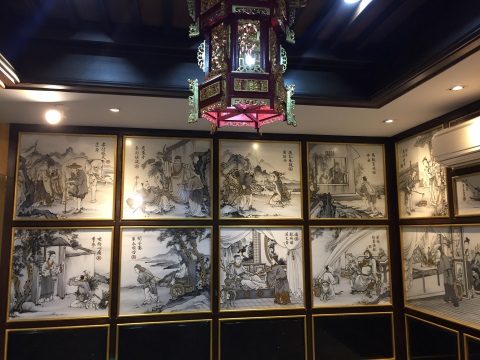 There are plates on the walls with the names of the deceased, I’m not sure if part of their remains are also stored here. Pictures on the walls illustrate wise sayings on the virtue of filial piety. 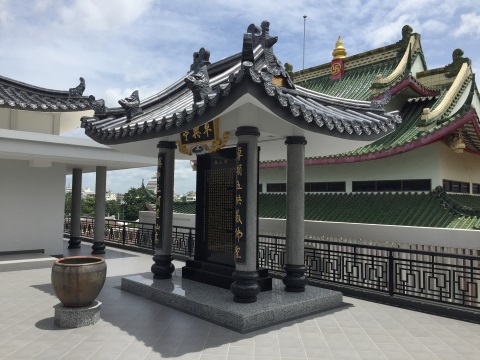 Courtyard on the 4th floor of the new building

The pagoda is the main attraction of Chee Chin Khor, eight floors with different deities on each floor and a panoramic view of the Chao Phraya at the top. Let’s start from the bottom. 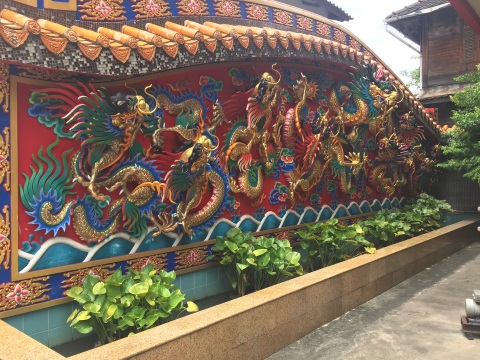 Wall of dragons behind the pagoda 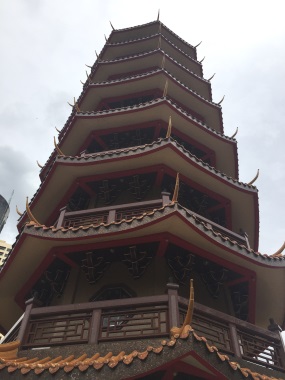 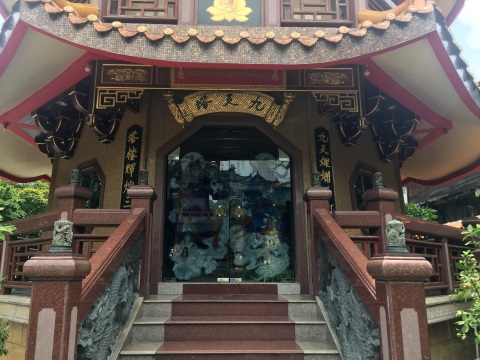 Main door to the pagoda 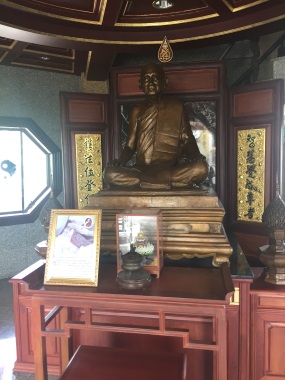 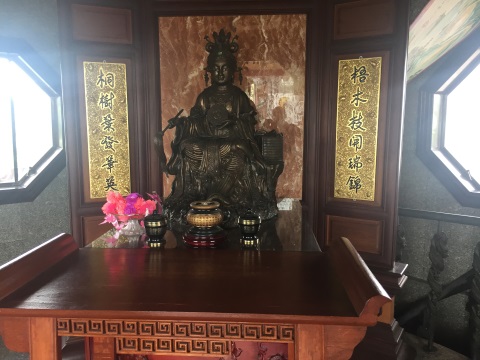 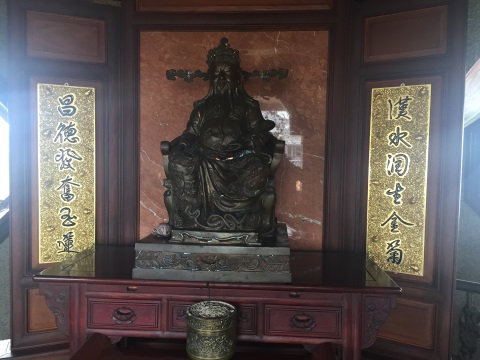 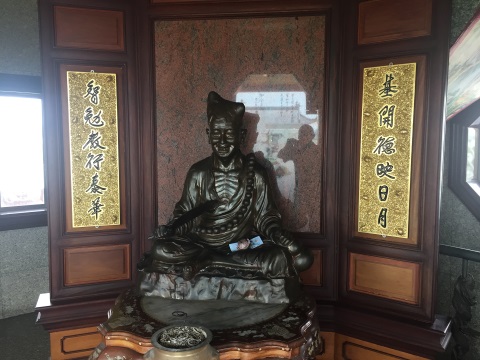 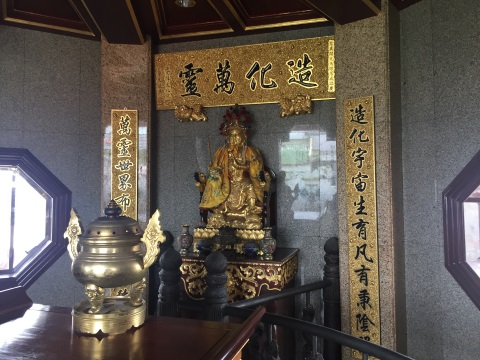 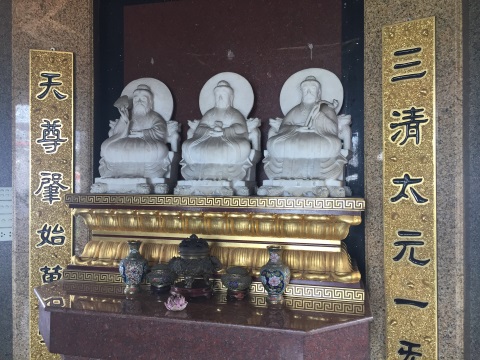 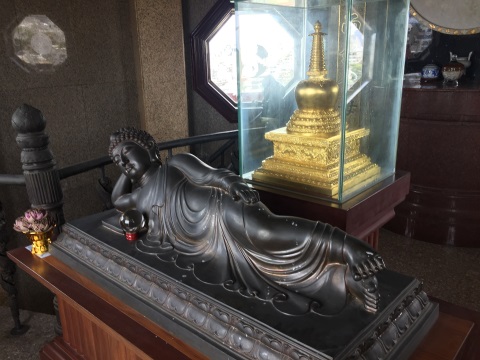 And here’s the reward for that strenuous climb, a panoramic view of the Chao Phraya River. 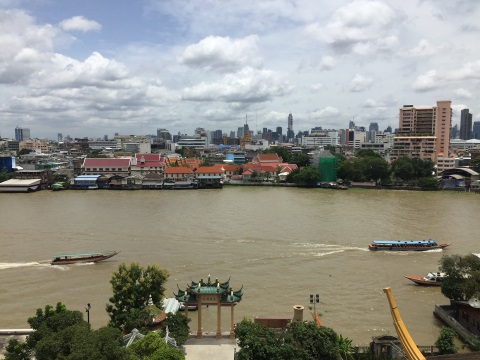 Wat Pathum Khongkha is directly opposite

Looking across the Chao Phraya to Chinatown

A visit to Chee Chin Khor is an interesting outing to a side of Bangkok that’s not frequented by many visitors. Even if we are not familiar with Buddhist and Taoist culture, the different architectural structures provide an opportunity for taking some beautiful photographs.

My thanks also to my good friends Lee Suan Wan and Phua Tun Hung for their help in translating some of the Chinese text.

There are no regular boat services to this place