The Royal Barge Museum
the legacy of kings

The Royal Barge Museum, on the banks of the Bangkok Noi Canal off the Chao Phraya River, is a huge boathouse that displays eight royal barges that are the product of the finest Thai craftsmanship.

Start your tour of the museum by viewing the four-part video clip which will give you an overview of the history of the royal barges. There are various types of barges and the designs depend on the function of the vessel.

The actual royal barges are the vessels for the monarchs. There are four such Royal Barges in the museum:

The Suphannahongsa or golden swan, the personal barge of the King is by far the most majestic. This royal barge, which was carved out of a single teak tree trunk, was completed in 1911. 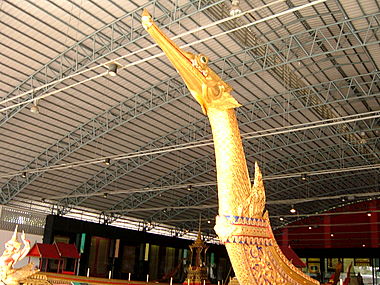 The Narai Song Suban H M King Rama IX is the latest addition to the royal fleet. This Royal Barge was launched on 05 April 1996 to commemorate the 50th anniversary of His Majesty King Bhumibol Ayulyadej's accession to the throne. 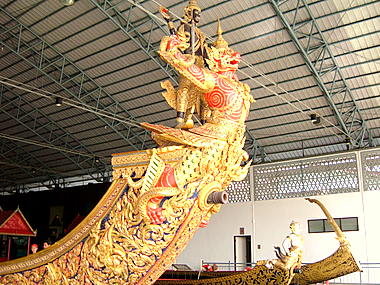 The process in building a royal barge is best illustrated by the construction of the Narai Song Suban H M King Rama IX in 1994.

The Anekchatphuchong was first constructed during the reign of King Rama IV. The current version on display at the museum was launched in 1914. 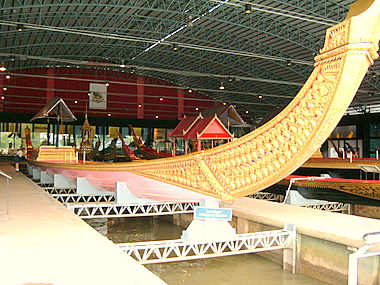 The fourth royal barge is the Anantanakharat with its seven-headed Naga sprouting from the bow. 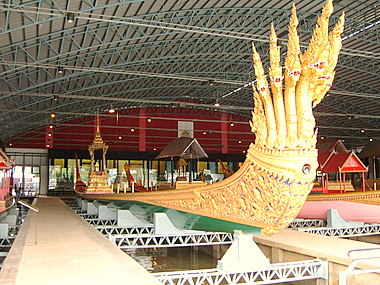 These four Royal Barges on display at the Royal Barge Museum are beautifully adorned with the intricate carvings on the hulls which are elaborately painted.

The barges are in berths and raised above the water level in the dock with the mythical figureheads on the bow towering above the visitor.The other four barges on display at the museum are escort vessels:

The Ekachai class barge with the horn of a mythical dragon on the bow. 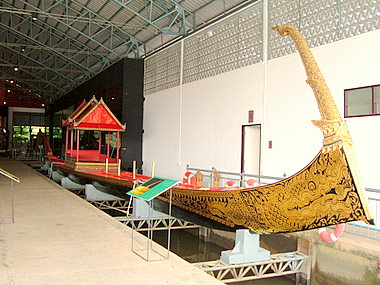 The Krabi class barge with Hanuman the Monkey God astride the bow. 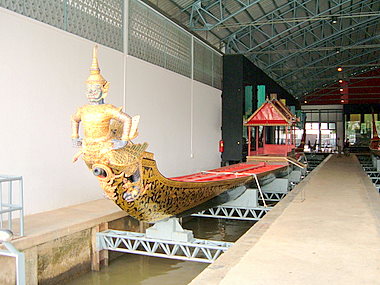 The Krut or Garuda class barge with a garuda in flight on the bow. 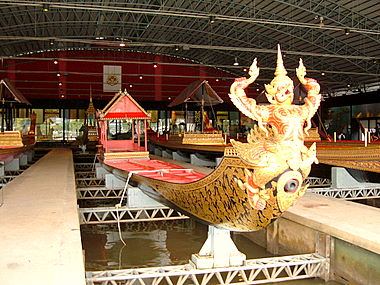 The Asura Vayupak class barge with the half bird and half ogre on the bow. 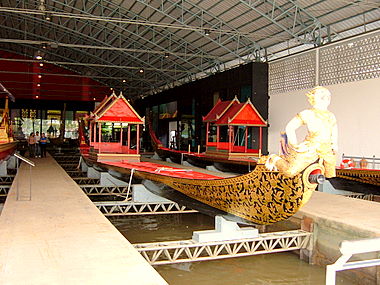 With the exception of the Ekachai class escorts all the other escort barges have a cannon at the bow. The hulls of the escort barges are lacquered in black and gold.

Please see the types of royal barges for details on the barges and crew.

There are two other locations where the barges are kept, the Royal Thai Navy Royal Barge dock near the Arun Amarin Bridge and the Royal Motorboat Dock at the Vasukri Pier.

The majestic splendor of the Royal Barges can only be fully appreciated when viewed in the Royal Barge Procession during which up to 50 barges are assembled in a regal flotilla to sail down the Chao Phraya River.

One such procession was the Royal Barge Procession at the APEC closing ceremony in 2003.

The grandest procession was Royal Barge Procession 2006 to celebrate the 60th anniversary of the reign of His majesty the King.

The Royal Barge Museum by the Bangkok Noi is a legacy of Kings for generations to come.

Map to the Royal Barge Museum

If you are taking a bus to the Royal Barge Museum, Service no 149 takes this route.

Get the hotel staff to write out the name of the museum in Thai to help you ask for directions on the way.

The Royal Barge Museum is open to the public everyday from 9:00 am – 5:00 pm. Entrance fee is 100 baht for foreigners and 30 baht for Thais. There’s an additional charge of 100 baht per camera.


Bangkok’s Hidden Treasures – the other faces of Bangkok 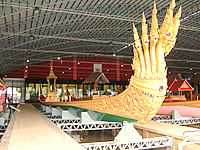 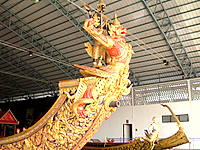 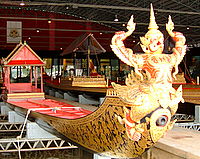