Royal Barge Procession 2007
in honour of the King

The Royal Barge Procession 2007 sailed on 5 November 2007 to celebrate the 80th birthday of HM King Bhumipol Adulyadej exactly a month later. King Bhumipol is in the 61st year of his reign and it is customary for HM the King to present new robes to the monks at the end of the Buddhist Lent.

This ritual called the Royal Krathin Ceremony is traditionally held at Wat Arun, the Temple of Dawn, an old temple from the Ayutthaya era. Unfortunately King Bhumipol is still recovering from a recent illness and HRH Crown Prince Maha Vajiralongkorn officiated at this ceremony.

A total of 52 royal barges and 2,098 members of the Royal Thai Navy took part in the procession this year. The 1.5 km long convoy started from the Wasukri Pier, a Royal Thai Navy pier in Samsen Road and wound its way down to Wat Arun on the Thonburi bank of the Chao Phraya.

As the Royal Barge Procession 2007 is in conjunction with a religious ceremony, it was relatively somber compared to the earlier ones.

Finding a place to view this spectacle took a little effort. Most of the public places along the river banks were occupied. The two biggest public areas are at the King Rama VIII Bridge and Santi Chai Prakan Park next to the old Fort Phra Sumen.

But these places were filled by then. Other areas along the banks are mostly private property.

However after much frantic searching along the banks just before the start, I was lucky to find the ideal location; the new Siam Riverview in Phra Arthit Road near Sanam Luang.

The hotel has a riverside terrace along the stretch of the Chao Phraya between Rama VIII Bridge and the Phra Pin Klao Bridge just north of Sanam Luang.

This gives a superb view of the Royal Barge Procession as it emerges from under the King Rama VIII Bridge and comes into full view. You can’t get any closer than this. 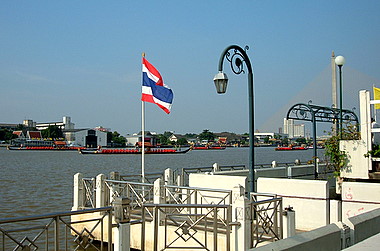 Coming into view – the Rama VIII Bridge is to the right

For those of us at Siam Riverview, the Royal Barge Procession 2007 came into view at 1536 hours, when the first of the escort barges sailed in to the distant chants of the men of the Royal Thai Navy manning the royal barges.

The chants and drums beats grew progressively louder as the procession approached us.

Ten minutes later, Anantanakharat, the leading royal barge with the seven-headed Naga at the bow, passed carrying the Royal Krathin robes on a golden pedestal for the ceremony at the Temple of Dawn. 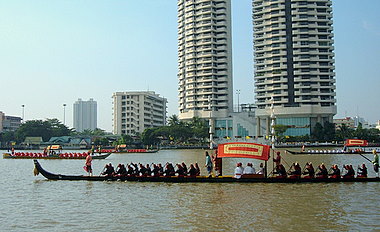 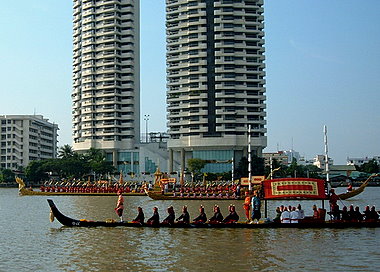 Another wave of colorful escorts adorned with mythical creatures like Garuda and Hanuman the monkey god followed in the wake of the seven-headed serpent. 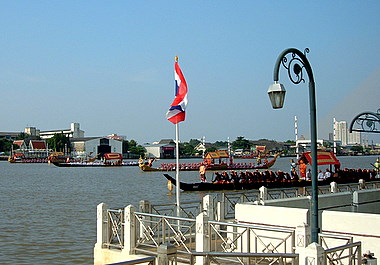 The next wave of escorts

Then it was the turn of Suphannahongse, the King’s royal barge and the pride of the royal barges to make her appearance with the HRH Crown Prince on board. 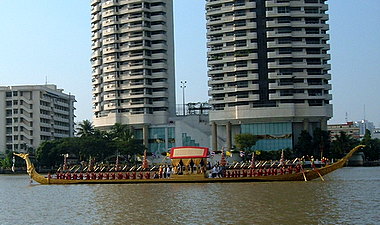 Trailing behind the golden swan were the watchful eyes of the Ekachai escort barges with Hera, the mythical horned dragon at the bow. 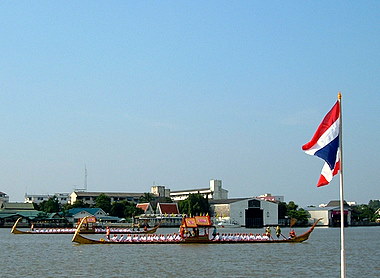 Two more royal barges followed in this grand procession; the Narai Song Suban King Rama IX with Vishnu astride Garuda at the bow and the Anekchatphuchong. 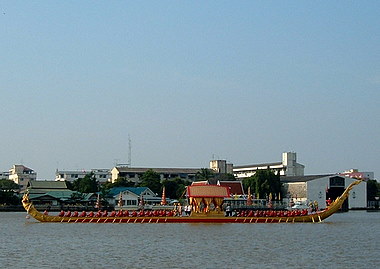 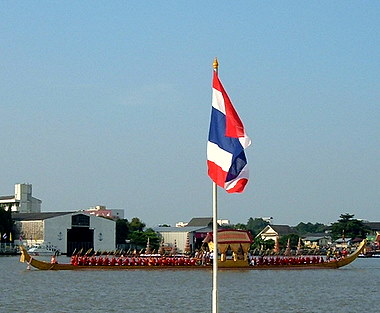 The Royal Barge Procession 2007 is the 16th procession in the reign of HM King Bhumipol Adulyadej.

By 1600 the last of the escort barges passed under the Phra Pin Klao Bridge and sailed towards the Temple of Dawn preserving a tradition that dates back to the 13th century Sukhothai kingdom. 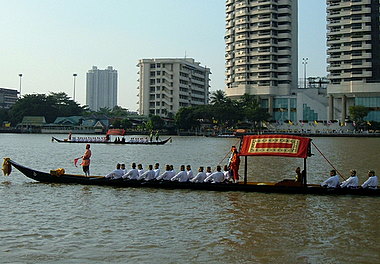 Last of the escorts 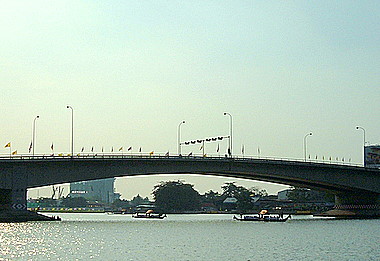 Towards the Temple of Dawn

To return to Royal Barge Museum.