The Royal Barge Procession 2006 was part of the grand celebrations to commemorate the 60th anniversary of the reign of His Majesty the King.

This Royal Barge Procession is the 15th procession in the reign of King Bhumibol and has several special features.

Firstly, all four principal royal barges, Suphannahongse, Anantanakharaj, Narai Song Suban H M King Rama IX and Anekchatpuchong are in the procession of 52 barges manned by a crew of 2,082, a triple record.

Secondly, the VIP guests are monarchs or their representatives from 25 countries from Africa, Asia-Pacific, Europe and the Middle East, probably one of the largest assembly of royalty in one place for a long time to come.

Unlike the last Royal Barge Procession in 2003 which ended at night, the procession launches off an hour earlier to finish just before last light to provide a better view for spectators.

The Royal Barge Procession 2006 is a result of months of detailed planning and preparations. Behind the scenes, painstaking preparations take place; the royal barges are refurbished, traditional artisans prepare the equipment for the crew and the ornate decorations for the barges as tailors prepare the ceremonial uniforms and headgear.

Intensive training of the crew is carried first on land, at individual barges and then in formation with emphasis on precise timing. Meticulous details include the controlled release of water from the dam upstream to maintain a manageable current for the oarsmen.

Earlier in the afternoon, heavy rains lash down on Bangkok. Crowds, some of whom were here in early hours of the morning, are drenched but undeterred. Just before the start the rain thankfully eases up.

The public areas along the banks of the Chao Phraya are crammed with people, eagerly awaiting this rare spectacle, the Royal Barge Procession 2006.

At the Rama VIII Bridge, escort barges moor in positions to prepare for the launch off. Oarsmen and their officers are resplendent in their colorful ceremonials.

At the raising of pendants and to the clarion call of bugles, the escorts launch off, rowing to the rhythmic chants of the traditional barge song.

The Royal Barge Procession 2006 has begun. 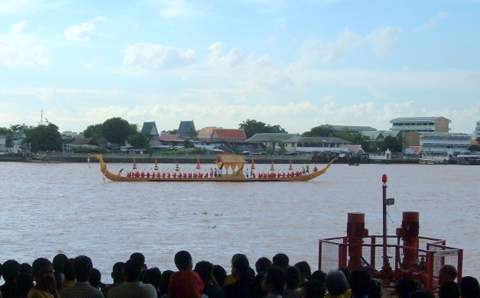 Craning necks over the crowd to catch a glimpse

Escort vessels take up to positions to the front and on both flanks as the royal barges gracefully sail in at midstream.

The entire royal armada, with two rows of escort barges on either flank, gradually takes shape strung out over 1,200 meters on the river of kings.

The Suea or Tiger escorts, their cannon just above the snarling fangs of the ferocious tiger sharks painted on the bows, spearhead the procession ahead of the royal barge, Anantanakharaj and its fearsome seven-headed Naga.

The majestic Suphannahongse or golden swan, the King's barge, sails into view with a tassel dangling from her long beak. Carved from a single teak trunk, the Suphannahongsa was launched in 1911 in the reign of King Rama VI.

Lord Vishnu astride his garuda steed adorns the bow of the Narai Song Suban H M King Rama IX, the newest royal barge, on her third procession, the Royal Barge Procession 2006 as part of the Diamond Jubilee celebrations.

Narai Song Suban King H M Rama IX made her debut in 1996 to commemorate the Golden Jubilee of His Majesty the King's reign. Her second Royal Barge Procession was in 2003.

The elegant Anekchatpuchong, built in the reign of King Rama V is the fourth royal barge in line.

The royal barge chant drifts downstream in measured cadence. Oarsmen respond in unison as they dip their oars in perfect harmony. 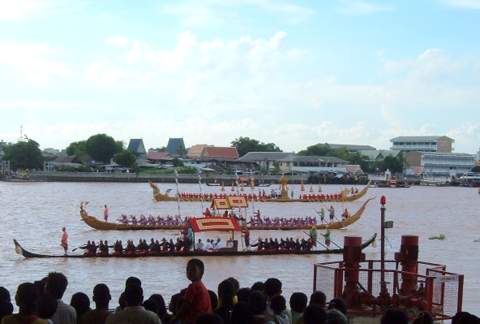 As Royal Barge Procession 2006 sails past just before last light, one can feel the ripple of excitement and surge of emotion among the crowd.

The pride of the kingdom is in full array before their very eyes.

At dusk over the Chao Phraya, hundreds of krathongs (lighted floats) and paper lanterns are released, lighting up the river and the dark skies above.

The glittering outline of the Grand Palace is shrouded by the misty spray of sprouting fountains on the bank.

In the distance, the Rama VIII Bridge, with its lighted suspension cables and sparkling diamond at the pinnacle of its support tower, stands out like a golden harp in the night.

These vivid images provide a memorable finale for the Royal Barge Procession 2006. We eagerly await the next one.

For details of the previous Royal Barge Procession at the APEC closing ceremony in 2003.