The Royal Barge Procession
splendour on the Chao Phraya

The Royal Barge Procession in Bangkok, conducted on very rare occasions, is a spectacular royal armada on the Chao Phraya River.

This procession is normally conducted on the following occasions:

Some of the memorable processions during the reign of King Rama IX, the present King, were:

The procession on 20 October 2003 was special as that was the first time it took place at night, amid special light and sound effects for the stretch of the river fronting the VIP's.

The guests were seated in the Royal Thai Navy Institute across the Chao Phraya River from the Grand Palace.

At 2000 hours, 50 barges consisting of the Suphannahongse, the Narai Song Suban H M King Rama IX and escort barges were launched from the Wasukri Pier upriver.

This flotilla of royal barges, when fully deployed in a sailing formation of five columns abreast and 90 m wide, stretched 1.5 km along the Chao Phraya.

Concurrently at the Royal Thai Navy Institute, a 10-minute sight and sound presentation in six languages was made on the history and tradition of the royal barges.

The presentation was timed to end as the Royal Barge Procession sailed into view, on waters apparently lit with gold, as a curtain of mist fell over the river, creating an ethereal air.

Their chants of the ancient boat song, that dates back to the days of King Narai of Ayutthaya, drifted across the river.

Just then, the night erupted as fireworks burst, filling the sky with the brilliant national colors of the participating nations. The lights cascaded down illuminating the regal flotilla as it streamed past the Grand Palace, a splendid finish to a grand event. 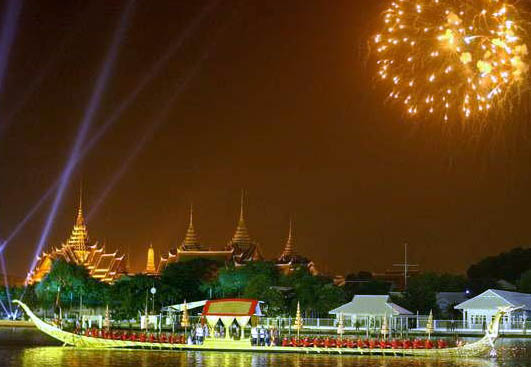