The types of royal barges, their designs and characteristics, reflect the influence of Hindu folklore on Thai culture and traditions. From the King's personal barge, Suphannahongsa to the royal escort barges, these barges have unique features related to Hindu deities.

Royal Barges used as vessels for the King, Holy Scriptures and Buddha images during Royal Ceremonies are:

The Suphannahongsa or golden swan, the personal barge of the King is by far the most majestic. This royal barge, which was carved out of a single teak tree trunk, was completed in 1911. 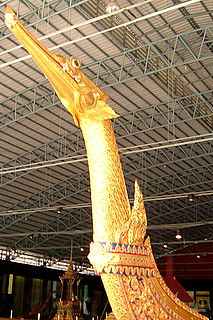 The golden swan or hamsa, the mythical steed of Hindu God Brahma, protrudes from the bow.

The Narai Song Suban H.M. King Rama IX is the latest addition to the types of royal barges. This royal barge was launched on 09 May 1996 to commemorate the 50th anniversary of His Majesty King Bhumibol Adulyadej's accession to the throne. 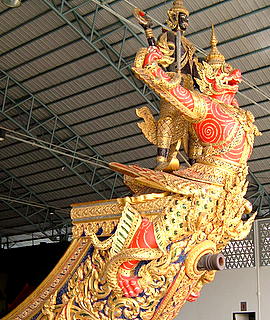 The Hindu God Vishnu astride his garuda graces the bow of this barge.

The Anekchatphuchong was first constructed during the reign of King Rama IV. The current version on display at the museum was launched in 1914. 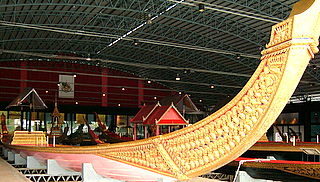 The fourth type of royal barge is the Anantanakharat with a seven-headed serpent, Naga sprouting from the bow. 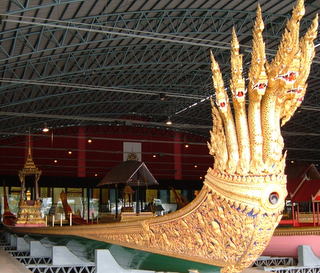 The Krut or garuda class barge with the garuda, Vishnu's steed, in flight on the bow. 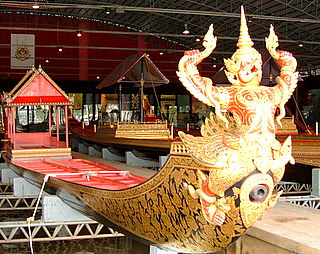 The Ekachai class barge with the horn of a mythical horned dragon or hera on the bow. The dragon's head and body are painted on the hull of the barge. 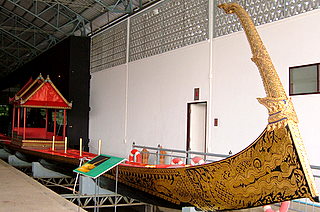 The Ekachai class is the only type of royal escort barge that does not have a cannon on the bow.

The Krabi class barge with Hanuman the Monkey God astride the bow. Hanuman is the Monkey God in the Ramakien, the Thai version of the Hindu Ramayana epic. 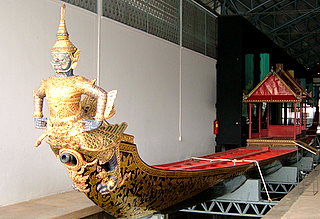 The Asura Vayupak class barge with a half bird and half ogre on the bow. 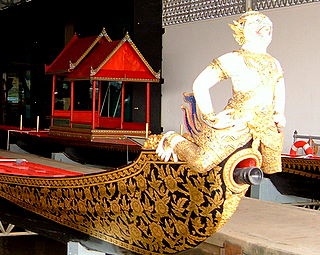 The Suea or tiger barge with a ferocious tiger's head painted on the bow and tiger stripes on the hull.

The designs of the various types of Royal Barges give each barge a unique character indicating its function and the influence of the Hindu legacy.

To view these barges please see map to the Royal Barge Museum.