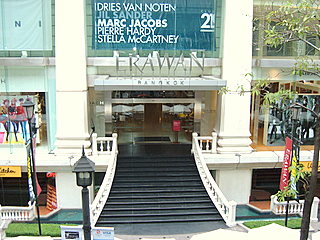 Entrance to Erawan in Ploenchit Road

No, Erawan Bangkok isn't the famous Erawan Shrine nor is it the five star Grand Hyatt Erawan Hotel. It's an upmarket boutique shopping mall lodged between its two famous neighbors. Being in this prime location has given it license to the famous Erawan name.

Opened in November 2004, the Erawan Bangkok provides shopping in luxurious comfort. The white façade was designed to blend in with the Grand Hyatt Erawan Hotel next door.

The interior is expansive and tastefully decorated with décor that's a soft pastel white giving a refreshing and soothing ambience.

The sounds of rushing water from the fountain in the basement fill the air with a very natural effect.

The basement leads to the Urban Kitchen where there are several food outlets, with the retail outlets located on the four upper levels. 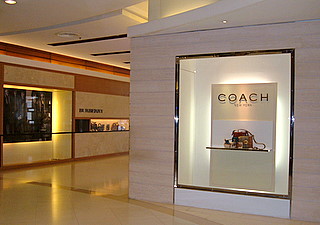 Four upper floors linked by escalators lead up to some very well known brands. The collection of fashion brand names at the Erawan Bangkok include: 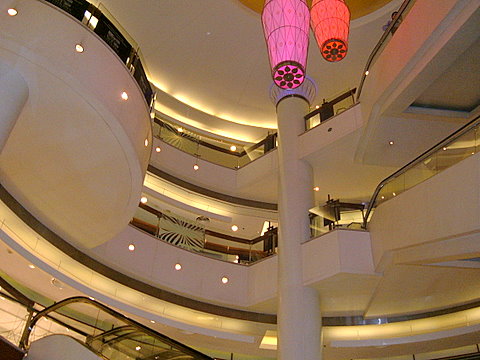 The Urban Kitchen in the basement has several up-market outlets for Chinese, Indonesian, Japanese, Thai and other cuisine including Bakerzin, Baskins Robins, Crystal Jade, and O'Brien's Irish Sandwich Bar.

Then there's the posh Erawan Tea Room on the third level.

A health and beauty center on the upper level provides services ranging from beauty care to colon hydrotherapy, though I can't imagine what the latter involves.

This luxury shopping mall is connected to the Chidlom skytrain station by a walkway on the second floor for the convenience of shoppers.

However this mall stands out from the rest, spacious yet cozy, a comfortable shopping experience and a pleasant respite away from the bustle of the city outside.

Since the opening of Erawan in November 2004, other mega shopping malls have emerged in Ratchaprasong and Siam Square. Siam Paragon opened with a bang in December 2005. Central World Plaza had a complete revamp and emerged last year with a spanking new look.

These new malls were an instant draw to shoppers, particularly the young and trendy. Events like live concerts, exhibitions, promotions keep the place alive.

By 2007, visitors to the smaller Erawan Bangkok have dwindled and half of the tenants are gone. Tenants who given up their lease include;

Depending on location, a famous name and big spenders just aren't enough. It might take more than the aura of the Erawan Shrine to pull through this downturn.