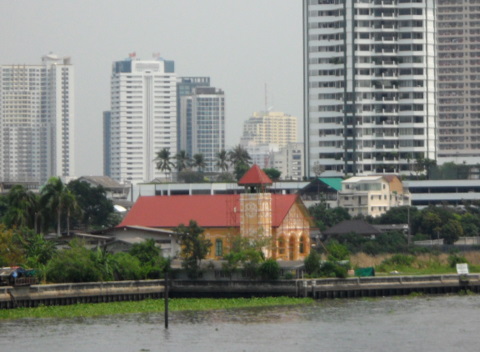 The First Presbyterian Church in Samray, Bangkok was started by the American Presbyterian Mission in 1849. It’s on a relatively quiet stretch of the Chao Phraya River near the Krung Thep Bridge.

The casual visitor could hardly be aware of the history of this church which is a testament to the efforts of the pioneers in the American Presbyterian Mission and the Thai Presbyterians over the last 160 years.

The first Protestant missionaries came to Thailand in 1828. They were Rev Jacob Tomlin, a British from the Church of England and Rev Carl Gutzlaff, a German doctor, both of whom were sent by the London Missionary Society. They didn’t stay long though.

From 1933, more missionaries came as part of the American Board of Commissioners for Foreign Missions. As their target was the Chinese population, they settled in a place next to what is now Wat Samphanthawong near Sampheng, Chinatown.

In 1835, Rev Daniel Beach Bradley MD an American doctor joined the group and immediately started his clinic in the area below the raised house. Rev Bradley introduced modern medical practices to Bangkok including small-pox inoculation.

He was also active in education. Rev Bradley taught English to a Thai prince and established a relationship that was to have important consequences later.

In October 1835, the missionaries moved across the Chao Phraya to Kudi Chin near the Portuguese community and Santa Cruz Church.

The premises were very small and couldn’t house all of them. In 1838, the prince who was Rev Bradley’s pupil built two houses for the mission near Wat Prayoon Wongsawas in the Kudi Chin area.

The houses were sufficient for the missionary work and living quarters. It was here that Rev Bradley set up his clinic and the first printing press in Thailand.

In 1840, missionaries from the American Presbyterian Mission arrived in Thailand. Leading the group was Rev and Mrs William Buell. Unfortunately Mrs Buell fell ill and they had to return home.

It was left to the next group of missionaries to lay the foundations for the First Presbyterian Church in Bangkok. On 22 June 1847, Rev and Mrs Stephen Mattoon and Rev Samuel House reached Bangkok after a long sea journey.

Two years later they were joined by Rev and Mrs Stephen Bush. The Presbyterian missionaries stayed with the earlier Protestant missionaries in Kudi Chin.

On 31 August 1849 these five missionaries met and decided to start a church even though they didn’t have a dedicated place of worship.

They called the church First Presbyterian Church, Bangkok. Initially prayer meetings and services were conducted in their living quarters.

In 1851, the prince who studied English with Rev Bradley and who befriended Rev Mattoon and Rev Bush ascended the throne to be King Mongkut or King Rama IV. The fortunes of the Protestant missions turned for the better.

In that year a royal grant of land was made in Kudi Chin. A new building was completed for a boys’ school on 30 September 1852.

The Thai-English Dictionary describes "samray" as a species of tree. The area called Samray is in Thonburi near the Chao Phraya River. In the early 1800s it was still wild and uninhabited.

There were grisly tales of Samray being used as the execution site for prisoners condemned to death. Few people wanted to settle there.

It was in Samray that the American Presbyterian Mission decided in 1857 to buy a plot of land to cater for the increasing congregation and school children.

In 1860 construction of the church commenced. An initial sum of US$700 was donated by diplomats, traders, sailors and other foreigners in Bangkok. Unfortunately the American Civil War broke out and donations from the Presbyterians in America were delayed.

Funds finally arrived from America and the donations reached US$1,200. The new church was completed by 1862 and the Thanksgiving service was held on 25 May 1862.

Samray soon became the centre of the Presbyterian community with the church, missionary quarters, a boys’ school, printing press and the church storehouse.

Locally the church is called Samray Church after the area where it is located.

In 1888, another American Presbyterian entered the scene. Rev J A Eakins came to Thailand and started a boys’ school in Kudi Chin called the Bangkok Christian High School.

This school moved in 1890 to join the Samray mission school and became the Samray Boys’ Christian High School.

Interaction with Thais in Samray increased as many were employed by the mission as house-keepers, cooks, teachers, others were ex-students. Many converted to Christianity. The local congregation grew and a Thai was appointed pastor of the church.

In 1896 Pastor Yuan Tiengyok became the first Thai pastor of the First Presbyterian Church, Samray. His tenure lasted till his death in 1927 at the age of 77.

The boys’ school in Samray continued to grow and in 1902 the school moved to Pramuan Road in Sathon and was renamed Bangkok Christian College.

There were two significant developments during the term of Pastor Yuan Tiengyok. The first was a new church building and belfry (bell tower).

The old Samray Church which served the congregation for 50 years soon fell into disrepair. In 1910 a new building was constructed based on the design of the old church. Donations of 7,000 baht were received from members. 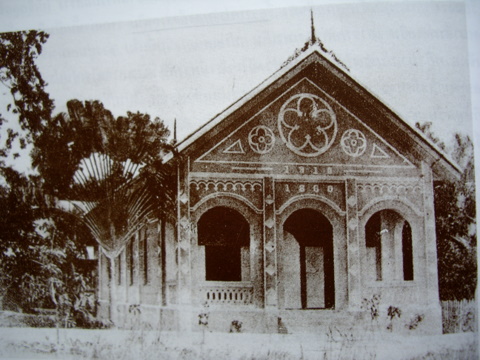 The rebuilt church in 1910 before the belfry was built. Courtesy of Ahn Sittiyot

In 1912 the belfry, a separate structure, was constructed next to the church. These two structures remain till today. 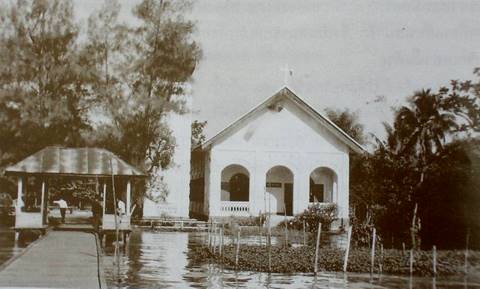 After the belfry was built, notice how close to the river the church is, area in front of the church was reclaimed between 1967 and 1981. Courtesy of Ahn Sittiyot 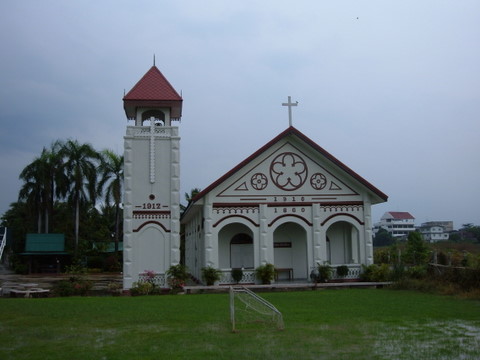 Samray Church taken on my first visit on 15 November 2005

The second significant development in Pastor’s Yuan’s term concerned the church land in Samray. In 1916, the church sold some of the surrounding land to members of the congregation. 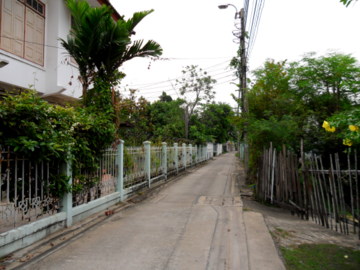 Soi leading to the church, many of the church
members live here 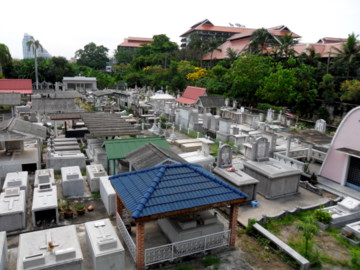 This gave rise to a Presbyterian community in the area with the church as the centre of the community and religious activities. In recent years some of the properties have been sold but many of the church members are still the descendants of the early residents.

In 1963, a building was constructed for the church office and community hall. To honour the man who spent his boyhood with the Presbyterian mission school and devoted most of his adulthood serving the First Presbyterian Church, they named the building Tiengyok Hall, after Pastor Yuan Tiengyok.

"So I say unto thee, that thou art Peter, and upon this rock I will build my church; and the gates of hell shall not prevail against it."

The First Presbyterian Church was one of Thailand's entries to the UNESCO Asia-Pacific Heritage Awards for Cultural Heritage Conservation in 2005. None of the Thai entries won the award. 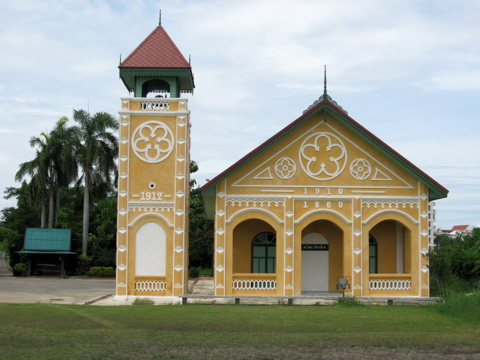 Taken in 2008, (after the church was repainted) but before the renovations in 2010. Courtesy of Ahn Sittiyot

When the current church building was constructed in 1910, it was very close to the Chao Phraya River. This gave rise to periodic flooding. Between 1967 and 1981, the area in front of the church was reclaimed. However floods still occurred, the latest in November 2010 when the church grounds were completely inundated.

In that year, the project to raise level of the land around the church commenced. The church building was also raised from its original foundations. New piles were inserted beneath to raise the building as a measure against future flooding. The project was completed in mid-2011.

The photos in the following sections show the church when this project was completed in mid-2011. 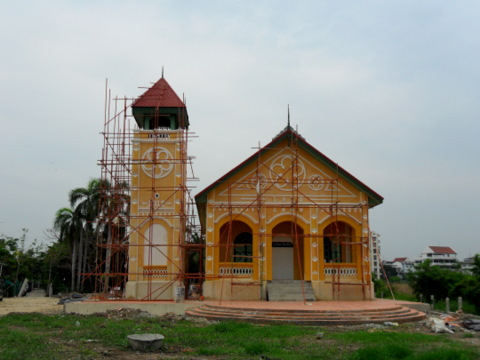 I revisited the First Presbyterian Church after a long absence. Here are the photos of the church after the land and the building have been raised. The project was completed in mid-2011. 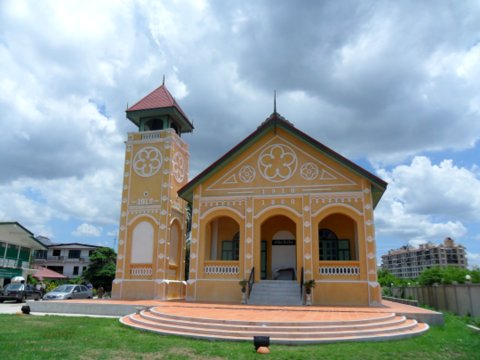 Church in 2013. Note the elevated level of the church compared to the photos taken in 2008 and before 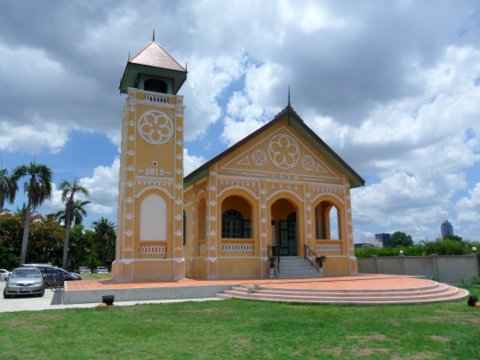 The interior is beautiful with wooden floor boards replacing the marble and the original seats retained. The lighting within the church provided this photo with its rich and warm glow. I didn’t touch it up at all. 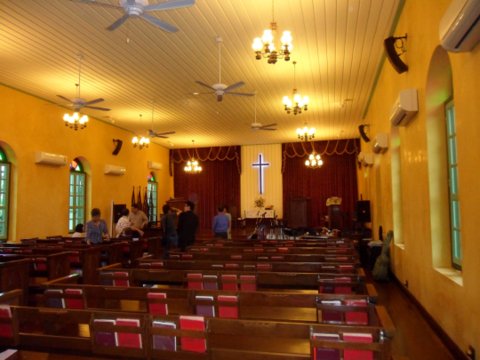 Inside of the church

Thank you to Rev Prayoon Karavanon, Pastor of First Presbyterian Church for kindly granting me permission to photograph the church.

Deacon Cheevin Mangonphan was extremely helpful in clarifying several points in the history of the church which I was unclear.

His association with Samray Church goes back several generations.

His great-grand-father Rev Kimheng Mangonphan worked in Samray Church after his retirement as Pastor of Wattana Presbyterian Church.

Deacon Cheevin researched and wrote the book commemorating 150 years of the First Presbyterian Church (1849 – 1999) which has a wealth of information. This task took nine years.

I am grateful to Khun Ahn Sittiyot, staff member in the First Presbyterian Church, the first person I met, for her assistance. She provided the historical material to write this article, showed me around the church and provided some of the old photos in this article


Map to the First Presbyterian Church

Take the Green Line (BTS Sky Train) to S7 Krung Thonburi Station. From there take a taxi to the church, it's about 3 km. If you are coming from the west, drop off at S8 Wong Wian Yai Station. It's about the same distance to the church by road. 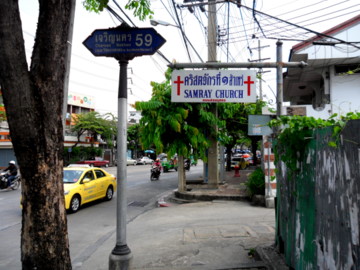 Our Thai readers can check the church web site in Thai at Samray Church.

To return to Bangkok Churches