Hotels in Sathorn
the pride of Bangkok's embassy row 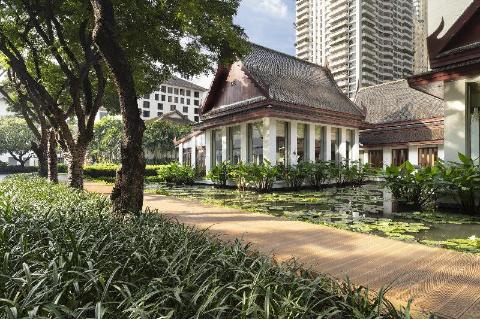 Hotels in Sathorn are Bangkok hotels in a location of prime residential and commercial properties consisting of 5 star hotels, serviced apartments, embassies, posh apartments, schools, churches and private hospitals. Of the few canals left in Bangkok, two of them are in Sathorn, an area with a long and rich history.

Click on the link to go directly to your preferred area.

A major road linking Thonburi on the west bank of the Chao Phraya to the city center, Sathorn Road actually consists of two roads; North Sathorn and South Sathorn separated by a narrow canal that's hardly noticeable in the heavy traffic. Our story begins with this canal.

Back in 1892, 24 years into the reign of King Rama V, Chao Sua Yom a wealthy Chinese immigrant was commissioned to dig a canal linking the Chao Phraya River near Wat Yannawa to Hua Lam Pong canal.

The earth from the excavation was used to build a road running along each bank of the new canal. Locals called this canal Chao Sua Yom Canal and the road Phor Yom Road.

This effort was as a result of a regulation in the 1870s to award concessions to private individuals to build canals and roads. The concession-holder was granted ownership to the strips of land 1,600m wide on both banks of the new canal.

In recognition of his services, Chao Sua Yom was awarded the royal title Luang Sathorn Rachayuk and the names of the road and canal were subsequently changed to Sathorn in his honor.

For his enterprise, Chao Sua Yom was richly rewarded. The land grant on the banks of the Sathorn canal was parceled off into smaller lots and sold to rich merchants, both foreign and Thai, who built European styled mansions. Immigrants flocked to the less fashionable areas to cultivate orchards and plantations. 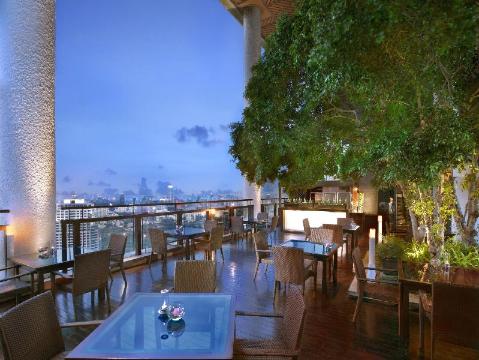 The Banyan Tree Bangkok - dining under the stars

In the following century however, Sathorn went through a complete transformation. The mushrooming of hotels, condominiums, serviced apartments, banks and offices turned Sathon into a prime district in Bangkok. The main Sathorn Road hosts some of Bangkok's best; the pride of the 5 star hotels in Sathorn. 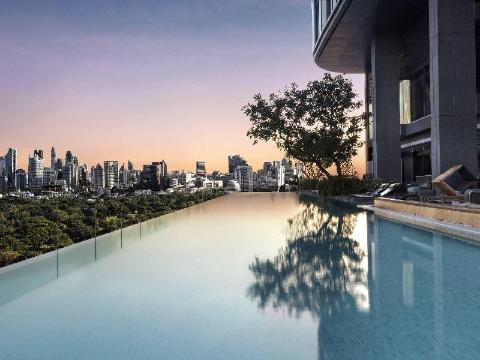 The chic SO/ Bangkok

Then, in Sathorn Soi 1 where the Royal Danish Embassy is located, there’s the Panthip Suites.

Between the French and Australian embassies was what used to be an old hotel in the 1990s. Converted to a cheap apartment in the early 2000s, the building became quite rundown and unsightly.

After a complete facelift and a couple of name changes, the result is the Embassy Sathorn joining the super league of hotels in Sathorn.

At the junction of Sathorn Road and Soi Suan Plu, the dominating Sathorn Vista Marriott Executive Apartments and Urbana Sathorn have a commanding view of the entire area. 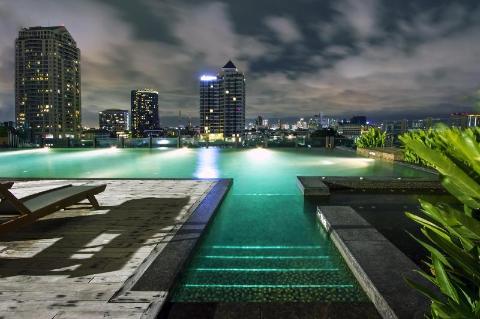 Many of the sois off Sathorn Road, where some of the hotels in Sathorn are located, have their stories too.

Would guests at Somerset Park Suan Plu a serviced apartment is in Soi Suan Plu, have imagined that the area used to be betel plantations and orchards cultivated by Chinese immigrants at the turn of the 20th century.

Some of their descendants still live here in the shop houses that line the street. You can occasionally hear the strains of Teochew, a southern Chinese dialect, among the older residents. 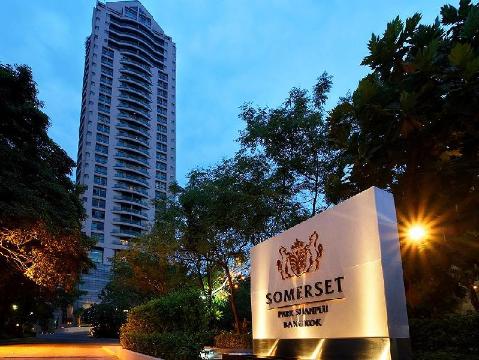 The other hotels in Suan Plu are:

In the seemingly endless sub-branching of sois, Soi Phra Pinit off Suan Plu is the site of M.R. Kukrit Pramoj’s House, a set of traditional Thai houses. Designated a national heritage, the house was the former home of the 13th Prime Minister of Thailand in the mid 1970s. It's open to visitors every day.

The Yellow Ribbon Hills Boutique Suites a comfortable hotel/apartment popular with the Japanese, is in this quiet residential lane.

Soi Saladaeng off North Sathorn Road, was part of a large tract of royal land that extended all the way to Lumphini Park and Siam Square. The area got its name from Sala Daeng, the red roofed railway station of the old Paknam line ran by a Danish company linking the city with the port at the mouth of the Chao Phraya. 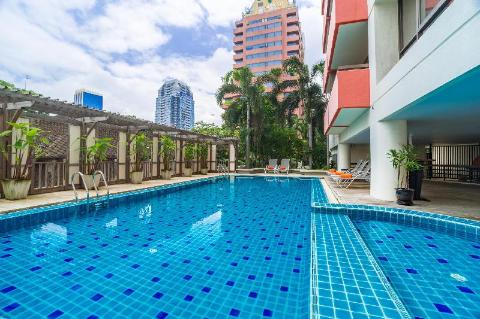 Saladaeng is now an up market area popular with cafes, restaurants, condominiums and serviced apartments. The Jim Thompson Saladaeng Café is here. So are these hotels in Sathorn, 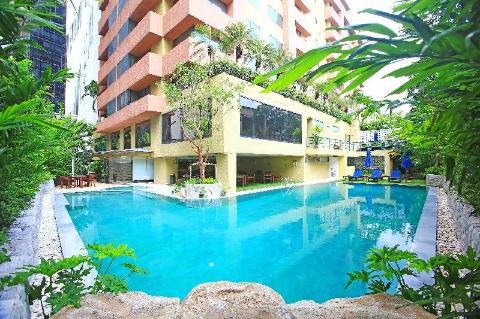 At the junction of Convent Road and North Sathorn Road, there's an old Anglican church, Christ Church, built in 1906 by the English residents in Bangkok from a land grant by King Rama V. The hotels in this area are served by the Chong Nonsi skytrain station.

FuramaXclusive Sathorn Hotel (former Unico Grande Sathorn) in Soi Pipat off Convent Road, is not far away from the walled monastery of the Carmelite order of nuns in Convent Road.

Every hotel tries to establish a distinct signature. In the case of the Evergreen Laurel Hotel at the junction of North Sathorn and Soi 6, its Chinese restaurant serves one of the best Hong Kong tim sum in Bangkok. 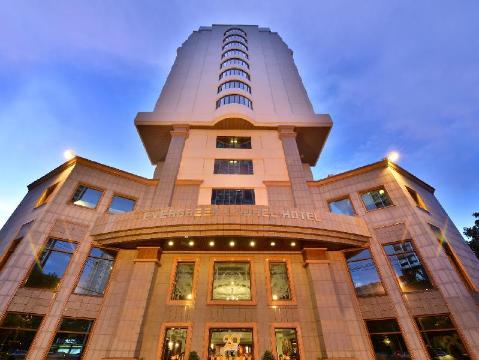 To help non-Thais avoid tripping over their tongues, the name of this road is sometimes spelt as Narathiwat Rajanakarin.

Overhead, the skytrain from Silom Road turns into Naradhiwas, stops at the Chong Nonsi station before it turns right into Sathorn Road, passing the Ascott Sathorn Hotel another of the hotels in Sathorn. 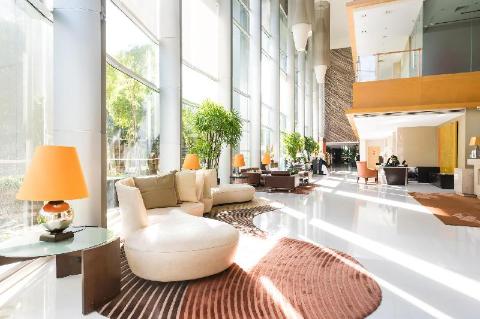 The Ascott Sathon Bangkok near the Chong Nonsi junction

The St Louis Hospital nearby is a non-profit hospital named after King Louis IX of France, the only French king to achieve sainthood. When Bishop Louis Vey founded the hospital in 1898, he provided land for a church in future. His wish was fulfilled much later when the St Louis Church was built in 1957.

Coincidentally the priest responsible for the construction of the church was Bishop Louis Chorin. So it's no surprise that the soi nearby, though officially named Soi Sathon 13, is commonly known as Soi St Louis.

The St Louis area is served by the Surasak skytrain station. The hotels in Sathorn within walking distance of this station are: 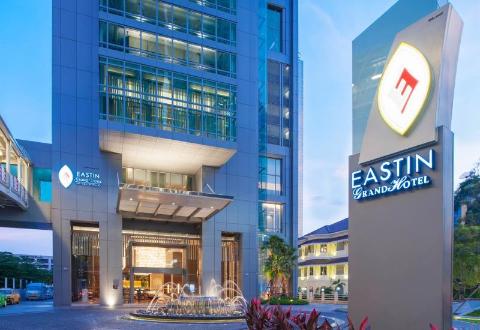 Baan Pra Nond Hotel was an old family home in Charoen Rat Road near the Surasak intersection and the skytrain station of the same name that was converted to a hotel. It’s only got nine rooms, a lucky number in Thailand.

In 1982, the Taksin Bridge, named after King Taksin of Thonburi, spanning the Chao Phraya was completed, linking Sathorn Road with Thonburi. The hotels near this station are:

Sathorn Road was widened to take the extra traffic and Sathon canal reduced in width. Naradhiwas Road and the Chong Nonsi canal were similarly affected. Though considerably narrower, Sathorn and Chong Nonsi are two of the remaining canals in Bangkok.

Few of the old mansions remain, their places taken by condominiums. The orchards and plantations are gone. The Hua Lam Pong canal was filled up to build Rama IV Road. 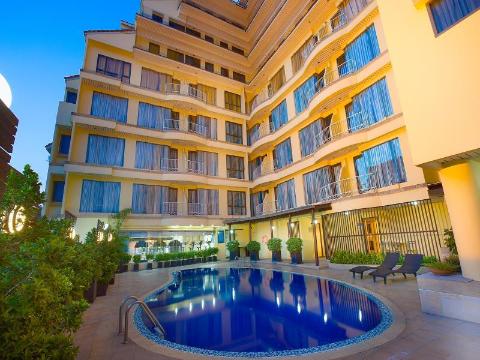 There are a few more hotels just off Rama IV Road near the Lumphini subway station.

Most of these are budget hotels, perhaps trying to keep a respectful distance from the other hotels in Sathorn, their five star neighbors in the prime embassy row.

There's an old photo in the Bangrak Museum of what Sathorn Road was like in the early 1900s. It's a scene of old Fords chugging down the road, boats being rowed in the canal and perhaps the occasional bullock cart.

Chao Sua Yom's decision to a canal south of Silom more than a century ago has paid off handsomely. He couldn't have foreseen then that the road he built would have some of the heaviest traffic in Bangkok a century later. Or that the surrounding area would be home to the hotels in Sathorn, the crown jewels among Bangkok's premium hotels.

For a complete list of the hotels in Sathorn or to locate a hotel in the area, please check out the search box below.

To return to Bangkok Hotels.