Ko Kred is a man-made island midstream of the Chao Phraya River near Pak Kred in Nonthaburi province just north of Bangkok. The island is home to an old Mon community and is famous for its pottery.

The island was created in 1722 when a canal was cut through the base of a sharp meander in the Chao Phraya River as it passed through Nonthaburi to shorten the sailing time to Ayutthaya.

Nonthaburi is an old province which is more than 400 years old and been in existence since the Ayutthaya period.

The province is just north of Bangkok about five km from the Bang Sue MRT terminal station. Like Bangkok, Nonthaburi straddles both banks of the Chao Phraya River.

When I first moved to Thailand, Nonthaburi was where I lived for three years. Ironically I never visited Ko Kred during that period even though there are two bus services that pass my place to Pak Kred.

The island is also home to the Mon community in Thailand. The Mon have a long history in Thailand and Myanmar. They are one of the earliest ethnic groups to settle in Thailand when they established the Haripunchai kingdom in Lamphun, northern Thailand in the 1st C.

The Mon converted to Buddhism in 5th C and developed their language in the 6th C. Repression and wars caused many to flee Myanmar to settle in Thailand.

For my journey to Ko Kred, I took the air-conditioned bus service 505 from Lumphini Park in Bangkok to Pak Kred Nonthaburi where the Rama IV Bridge spans the Chao Phraya River.

Just below the bridge there was a picnic with boat vendors catering to visitors enjoying a Sunday outing. I was tempted to join them. 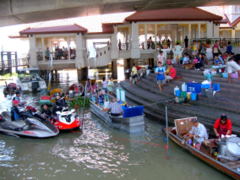 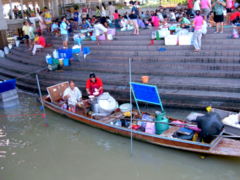 Unfortunately that pier under the bridge was the wrong pier! The boat took me to the far bank of the Chao Phraya instead and from there I had to catch another boat to Ko Kred.

The correct pier to the island is the one at Wat Sanam Nuea. Please see the map to Ko Kred for the directions.

We landed at the Wat Poramaiyikawat pier where a temple fair was in full swing. This is the start and end points for our tour of the island.

There’s a track that’s about five km that goes round around Ko Kred. It’s a pleasant walk. For a change, there are no cars on the island, only motor cycles and bicycles. Here are some of the highlights along the way.

The first thing that I encountered near the start point was food. Anyway it was almost lunchtime. 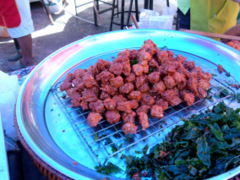 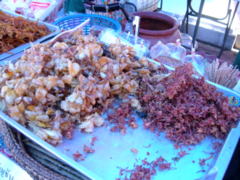 The deep fried fish balls on the left are my favourite. I forgot to check out the dish on the right. Here are more local delicacies. 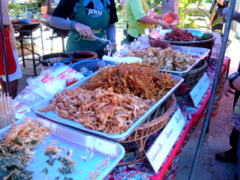 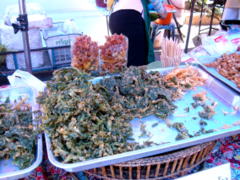 After the initial snack, I walked between two neat rows of houses along a path which was lined with stalls selling a variety of goods. 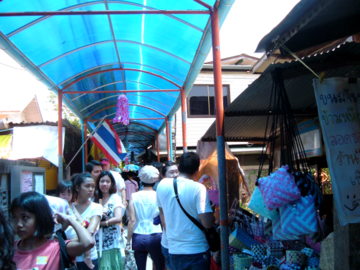 The vendors are local residents who set up the stalls on their doorsteps at the weekend when visitors, mostly Thai, flock to the island. These are some of the homes lining the path through the market. Some of the homes are old with ornate carvings. 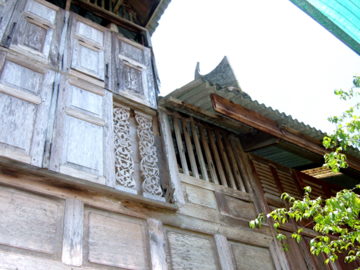 Others are right by the river bank. 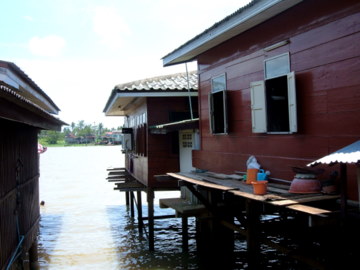 Well I got hungry again when I saw these clams fried in flour and egg batter. 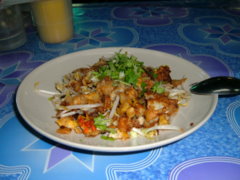 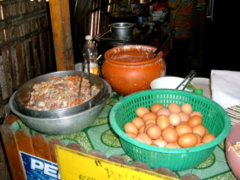 The dish (left) and ingredients (right)

The island is renowned for its pottery industry, a local heritage. Several vendors sell these pots of various shapes and sizes along the way. 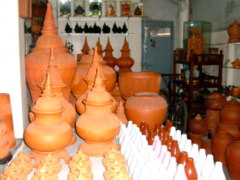 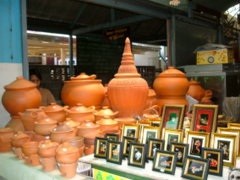 Besides pottery, there are also other souvenirs to take home from Ko Kred. 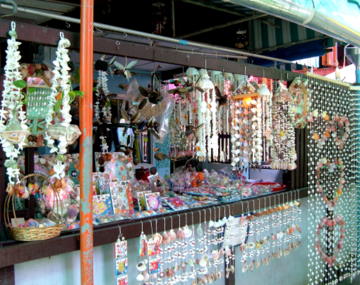 Wat Pai Lom is one of the five temples on the island. 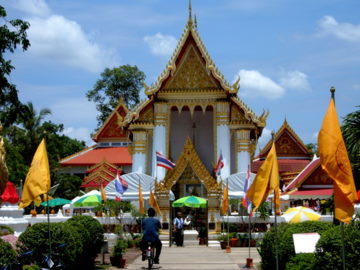 Here’s a furry friend I made along the way. His name’s “kai jiow” or omelette! 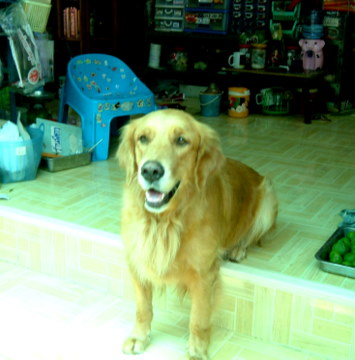 There are clean public toilets on the island and location maps in English and Thai along the way to guide visitors. 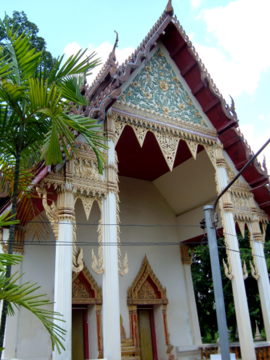 Wat Sao Thung Thong had the first school on the island

After Wat Sao Thung Thong, we leave the hustle and bustle of the local market and the blare of the temple fairs behind to stroll along this quiet country lane. 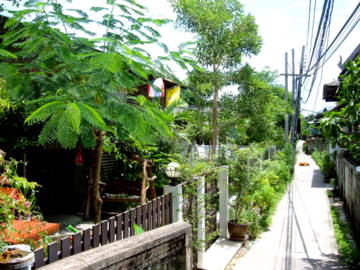 The rustic atmosphere was refreshing. I only encountered the occasional motor cycle or cyclist. 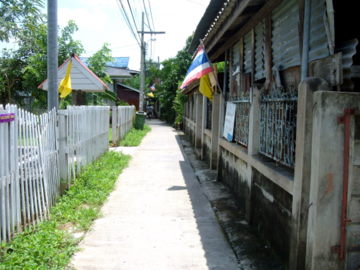 Track round the island

I wish I could have walked on in these pleasant surroundings but the old legs couldn’t get me all the way around the island. You probably need a need a bicycle to do that. Here’s a scene that made a lasting impression. 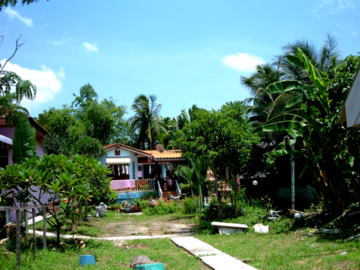 So it was back the way I came. On the way back through the market, a vendor was handing out free samples of a local delicacy. I took a piece as I walked by. After one bite I just had to go back for more. It’s a crispy cracker in the shape of a flower and laced with black sesame seeds. 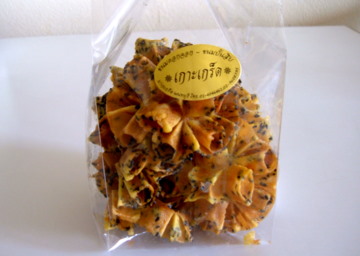 Back at Wat Poramaiyikawat, drop in at the pottery museum which displays the local handicraft. 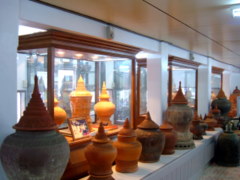 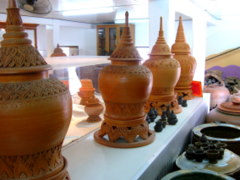 Then take a break at the park near the Wat Poramaiyikawat pier before returning to the Wat Sanam Nuea pier and back to hectic Pak Kred. 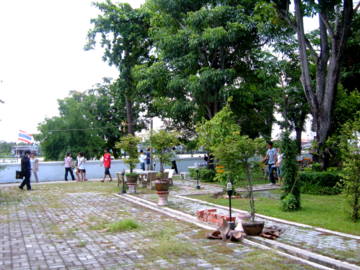 Park by the pier

Ko Kred is a pleasant weekend getaway from the city to see a part of Thailand that’s just within a day’s trip from Bangkok where an old community and their way of life are still preserved.

Map to Ko Kred - how to get there

Take the MRT Purple Line to PP08 Phra Nang Klao Bridge Station and then take a taxi to Wat Sanam Nuea where the ferry to Ko Kred is located.

At Pak Kred go to Wat Sanam Nuea to take the ferry to Ko Kred.

There are charter boats from the Sathorn and Nonthaburi piers to Ko Kred. I decided to take the bus which passes through Nonthaburi to revisit the place where I lived when I first came to Thailand. Besides it’s far cheaper.

The line on the map shows the track around the island linking the five temples on the island.

For other Bangkok communities.