Luang Ritthinarongron House Museum was the former home of a Thai nobleman in the 19th C which preserves the lifestyle in old Bangkok Yai and is one of the recommended stops in your Bangkok museum tour. 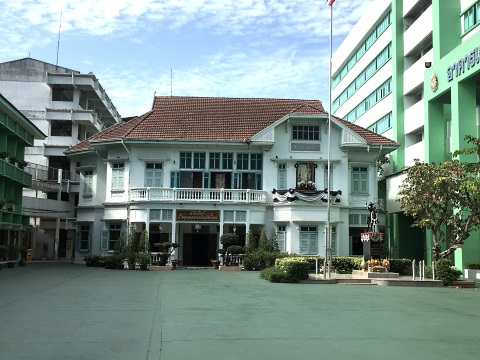 In the reign of King Chairacha of Ayutthaya (1534 – 1547) a canal was cut across the base of this bend to shorten the sailing time to Ayutthaya. After some time, this new canal became the main course of the Chao Phraya and the Bangkok Yai and Bangkok Noi Canals were created.

To get there, please see map to the Luang Ritthinarongron House Museum.

Bangkok Yai in the 19th C

Back in the old days, the Bangkok Yai area, around the canal of the same name, was the choice residential area for the wealthy landowners and senior government officials. This was during the period when the main means of movement were still along the waterways.

Fruit orchards were cultivated on both banks of the Bangkok Yai Canal and houses of the wealthy lined the banks of the canal all the way to the Chao Phraya River.

King Taksin the Great had his palace at the mouth of the Bangkok Yai Canal where it met the Chao Phraya. For this reason, the Bangkok Yai is still called Khlong Luang or Royal Canal. 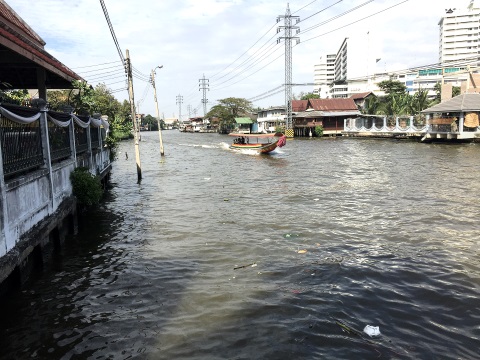 Bangkok Yai retained its popularity as a residential and commercial area until developments in areas like Sathorn and Sukhumvit on the east bank gradually drew people away to the popular areas in Bangkok as we know them today.

This is the story of a man who built his house on the banks of the Bangkok Yai, a house which still exists today.

Luang Ritthinarongron and his legacy

In the year 1863, towards the end of the reign of King Rama IV, a son was born to the Saengmanee family, a well-to-do family living in Bangkok Yai. Jek as the boy as called, attended school at Wat Hong Rattanaram till the age of 18.

He continued his education as a military cadet with the Royal Thai Army and completed his military education in 1884. As a young officer, he was posted to a special unit formed to suppress Haw¹ rebels who were raiding villages in Luang Prabang². 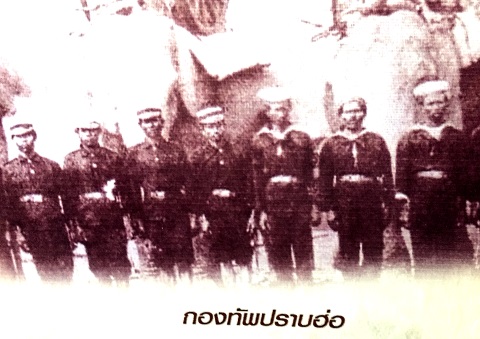 Members of the force to suppress the Haw rebels

The Haw rebels were defeated after a four-year campaign and in 1889, Lieutenant Jek Saengmanee returned to be promoted to Captain and awarded the royal rank and title of Luang³ Ritthinarongron⁴. With the promotion, he was posted to the Operations Department. 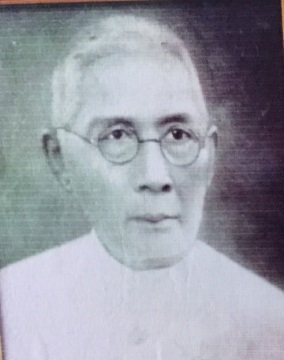 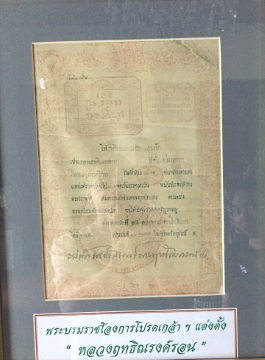 His noble rank and title helped Luang Ritthinarongron progress in his military career and in 1899 he became Army Commander in Ratchaburi. However poor health forced him to resign later that year.

In 1923 during his retirement, Luang Ritthinarongron built a stately mansion overlooking the Bangkok Yai Canal where he spent his time till his death at the age of 80 in 1943. As he had no heirs, his second wife, Khun Yai Jaem donated the house and land to the Ministry of Education. 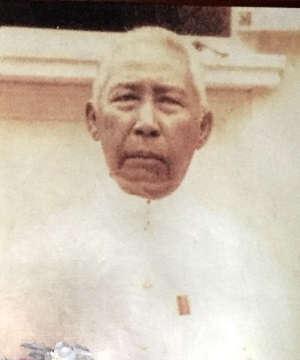 Luang Ritthinarongron in his later years 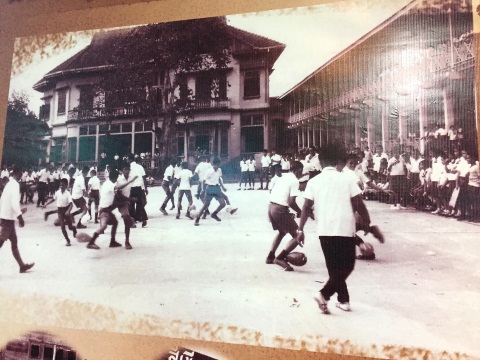 Football during the break, some things never change

¹The Haw are a hill tribe from Yunnan, Southern China. Some of them migrated to Laos and Northern Thailand.

²Chammpasak, Luang Prabang and Vientiane in present day Laos were part of the Siam until France took over the whole of Laos in 1893.

⁴Royal titles are specific to individuals, those who are awarded these titles frequently adopt the title as their family names.

Baan Luang Ritthinarongron is a two-storey house built in European design popular during the early 20th C. In 2000 the house was converted to a museum and the building was registered as a national monument with the Fine Arts Department. 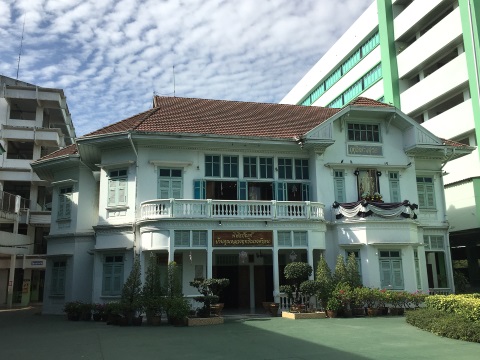 A statue of King Taksin the Great on his battle charger stands outside the museum, a reminder that he had his capital Thonburi on this side of Chao Phraya from 1767 – 1782 and his former palace is not far away from here. 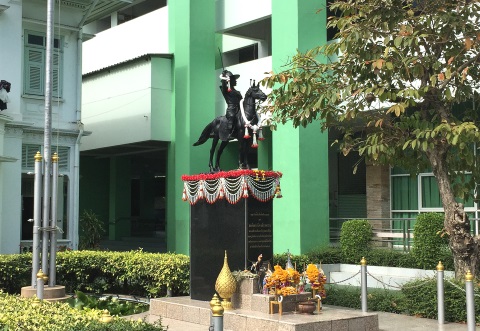 The original building has been preserved, the only change is to the roof tiles. As the original roof was leaking, the tiles were replaced with imported Monier roof tiles.

The plan of the house consists of a central room flanked by rooms to the left and right. On the ground, the kitchen and servants’ staircase is to the rear. The second floor has a similar plan except that instead the kitchen to the rear, there is another room.

Let’s take a tour of the Luang Ritthinarongron House Museum. 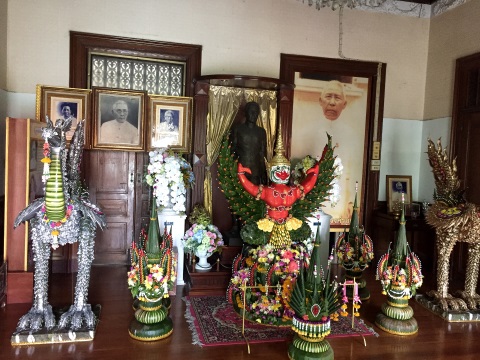 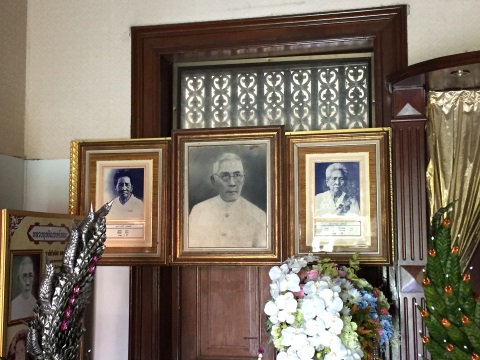 Luang Ritthinarongron and his wives

The rooms to the left used to be guest rooms but are not opened to visitors. 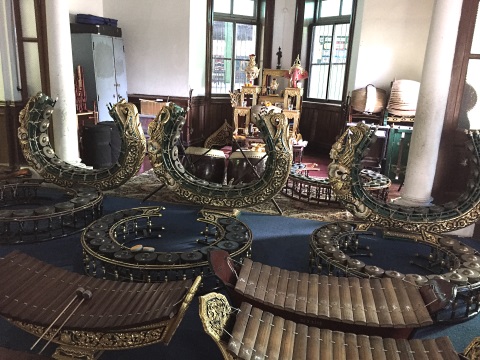 The staircase to the rear of this room has a special feature; there are no supporting pillars. The weight of the stairs seems to be supported by the sides by the walls. 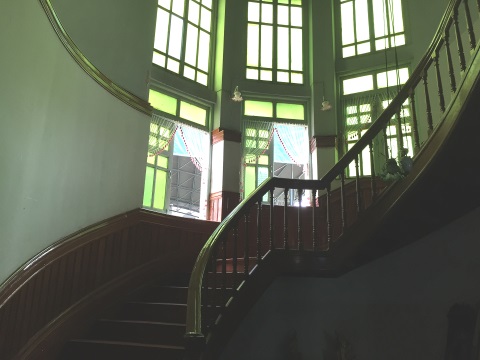 The first room upstairs displays Chinaware some of which are family heirlooms, others were donated by well-wishers, some were previously donated to a temple but the temple reciprocated by loaning these items to the museum.

This room which is to the right of the central room if you are facing the house was the bedroom of one of Luang Ritthinarongron’s wives. 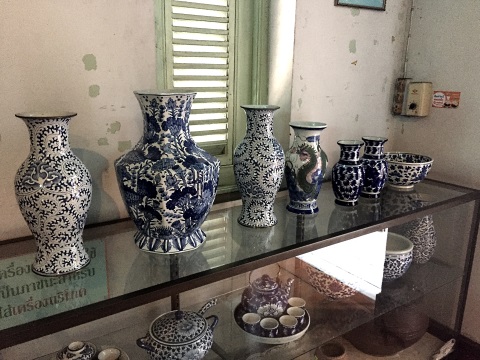 Out in the balcony which overlooks the courtyard is a tall Buddha statue which was installed in memory of Luang Ritthinarongron’s first wife who passed away. 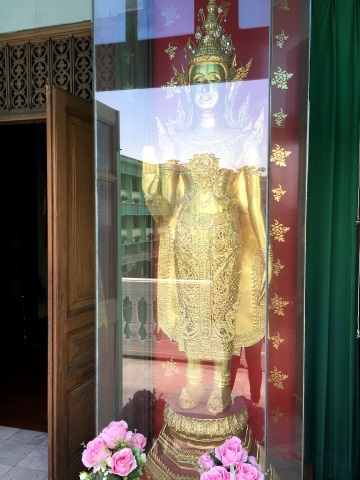 Buddha statue in the balcony

From accounts of his life, this balcony is Luang Ritthinarongron’s favourite place in the house where he would sit to view the lotus flowers in the field below and the Bangkok Yai Canal beyond.

The central room which is now used as an altar room used to be his bedroom. 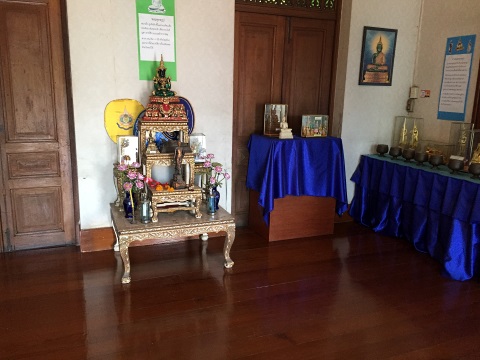 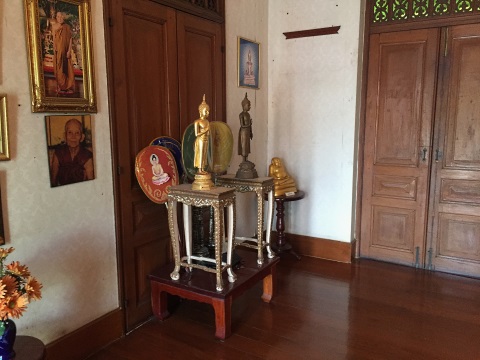 The room to the left is the bedroom of the other wife but is not opened to visitors.

The room to the rear has some in interesting displays of old costumes in the early days and items depicting life in old Bangkok Yai. 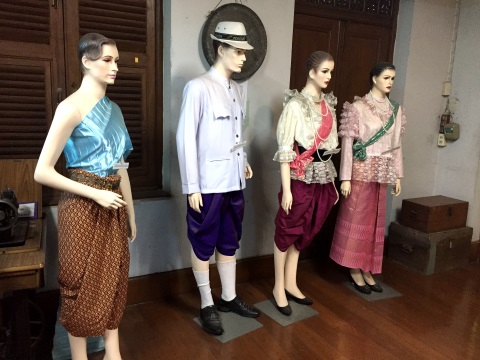 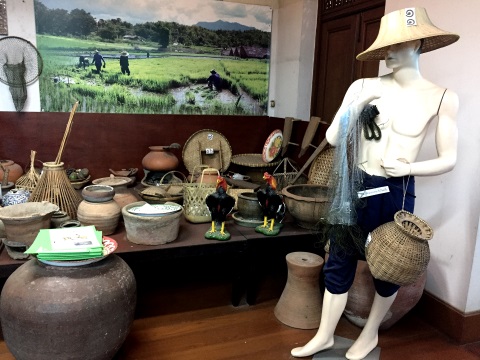 Life in the old days

On the way out, we passed a passageway where two types of local handicraft were on display; colourful kites and the figures from the nang talung or shadow puppet drama. 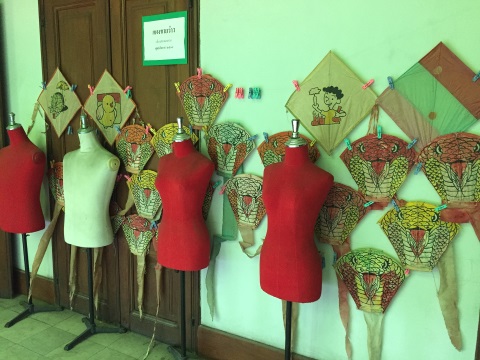 The nang talung or shadow puppet drama which originates from Southern Thailand, requires some elaboration. The puppets are made from carved pieces of cowhide, they are moved by players behind a white screen and a light behind casts the shadows on the screen. 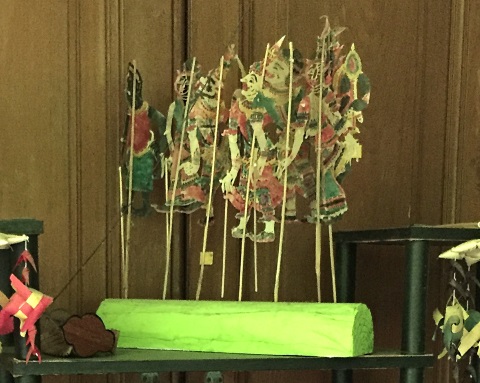 The figures used in nang talung or shadow puppet drama

The movement of these puppets is accompanied by classical musical instruments and a narrator who gave a running commentary on the play.

Such dramas were a popular form of public entertainment before the cinema was introduced to Thailand. 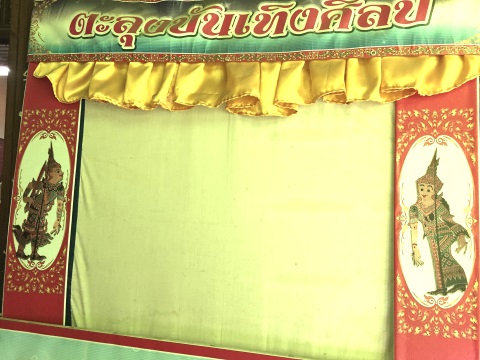 The screen used for nang talung

With that we end our tour of the Luang Ritthinarongron House Museum. It’s good to see old buildings like these preserved for posterity. This is because old buildings have interesting stories to tell and we hope that you have enjoyed this story.

Our sincere thanks to Ms Kwanhatai and Ms Atiporn, the two teachers from the Ritthinarongron School who are also in charge of the museum.

We really appreciate their efforts in showing us around the museum and school grounds. Thank you very much, ladies.

All photographs in this article are with the courtesy of the Luang Ritthinarongron House Museum. 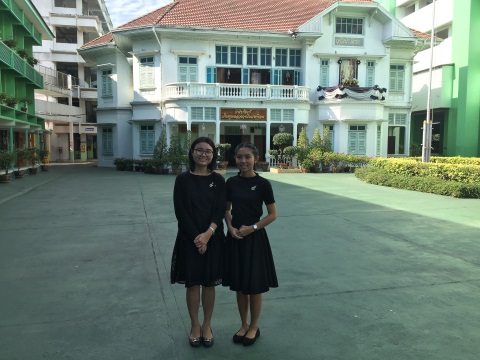 Our thanks to Ms Kwanhatai (r) and Ms Atiporn (l)

Get to the Wong Wian Yai traffic roundabout, then turn into highway 4, Intra Phitak Road. This will lead to Phet Kasem Road which starts after the bridge that crosses the Bangkok Yai Canal.

Make a U-turn further up ahead, keep left and turn into Soi Phet Kasem 2. The Luang Ritthinarongron House Museum is collocated with the Ritthinarongron School are at the end of the soi.

By the BTS Sky Train

Take the Green Line (BTS Sky Train Silom Line) to S8 Wong Wian Yai Station. From there, take a taxi to the museum.

Please remove your footwear before entering the building.