Merit making on a special day gave me a chance to follow a friend to visit nine temples in Bangkok with long and interesting histories and to get an insight into Thai Buddhism, culture and practice.

These nine temples were visited within one day.

This is part of the practice of Buddhism; the ways of making merit are to give alms to monks in the mornings, visit temples to pray and to live according to the precepts in Buddhist teachings.

Giving of alms and temple visits can be done any day but most people who are busy at work, choose special days for merit making. Such days are like holy Buddhist days and especially personal birthdays.

Being a non-Buddhist, other than a cursory glance at monks on their morning alms rounds, if I’m up early enough, I never really paid much attention to it.

It was also the birthday of a Thai friend.

One of the favorite ways of merit making is to visit nine temples in a day. Why nine? Nine or kao is an auspicious number for Thais because it sounds the same as the word kao "to step" as in kao na "to step forward or progress".

This is just like the Chinese preference for the number eight which has a similar ring with the word prosperity.

The nine temples chosen by my friend in this merit making trip was based on a recommended list of temples in close proximity to one another. For practical purposes, the temples were visited in the following order.

Presented here are the historical aspects of these nine temples, the sequence in visiting them and how to get there.

Please see map of the nine temples in merit making

We started our merit making journey at 8:00 am from the Sathorn pier and took a river boat to the Saphan Phut (Memorial Bridge) pier. From Saphan Phut, we walked through the busy Pak Klong Talat fresh flower market to the Pak Klong Talat ferry pier.

The ferry took us across the Chao Phraya River to a temple built in 1825 by Chao Phraya¹ Nikorn Bodin² (Toh Kalayanamit³) a nobleman who lived in the area called Kudi Chin. He donated his land and bought additional land in the area to construct this temple.

¹ Chao Phraya is a rank awarded by the king to men who have served him well. The order of precedence is Chao Phraya, Phraya, Luang and Khun. These ranks are no longer in use.

² Nikorn Bodin is a title that comes with the rank awarded.

³ Toh Kalayanamit is the person’s full name before he was awarded the rank and title. 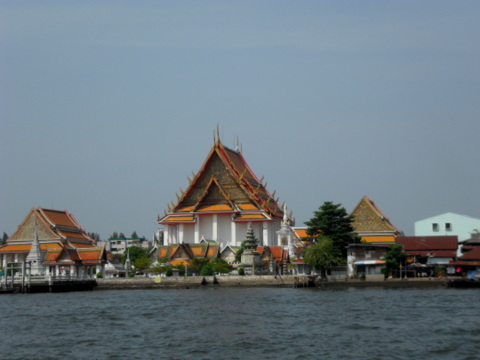 For our second stop, we returned to the Pak Klong market by ferry and took a 15 minute walk to Wat Pho near the Grand Palace.

Wat Pho which is by the Chao Phraya is famous for its huge 46 m long reclining Buddha. 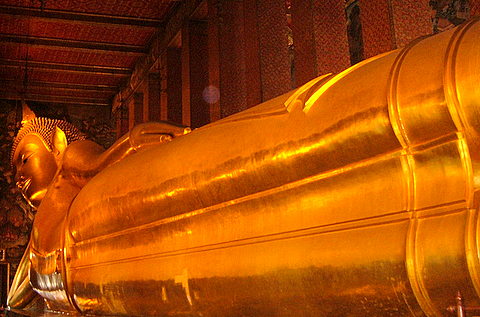 The murals on the walls of the Vihara of the Reclining Buddha are almost 200 years old. These murals like the temple have undergone a complete restoration from 2000 – 2007. 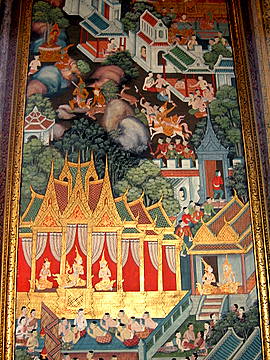 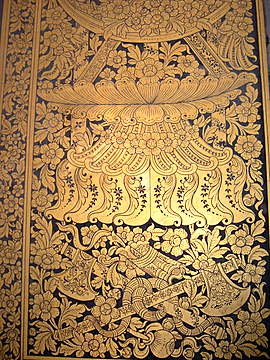 Next on our merit-making trip, we went down to the Tian pier near Wat Pho and crossed the Chao Phraya again by ferry. Our destination was Wat Arun the famous Temple of Dawn. 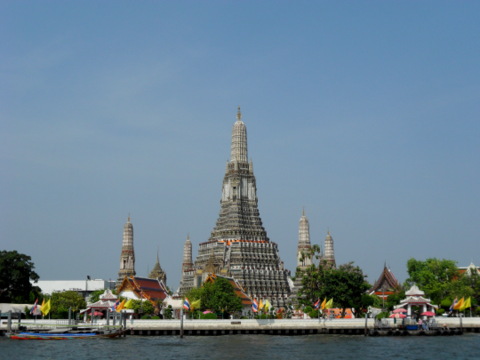 Wat Arun – the Temple of Dawn

The hallmark of this Ayutthaya-era temple is its 81 m prang that’s an icon for visitors to Bangkok.

Such a structure is a construction feat considering the soft silt on the river banks which were reinforced by huge piles.

The Emerald Buddha was kept here until it was taken to its present location. 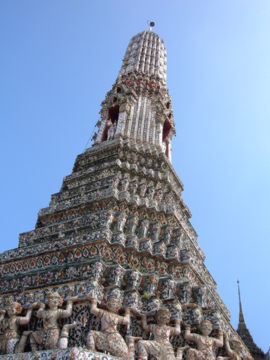 A landmark on the Chao Phraya

Then we took a 10 minute ride on a tuk tuk to Wat Rakhang. The former home of King Rama I before he became king is on the grounds of this temple. 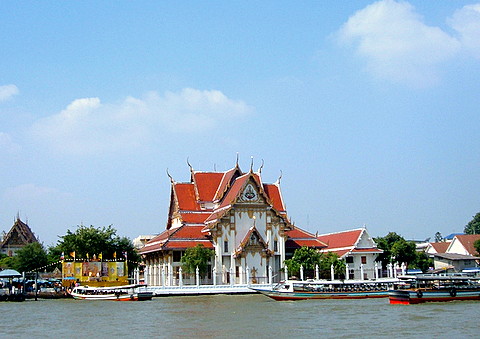 Temple of the Emerald Buddha

From here we returned by ferry to Chang pier and proceeded to Wat Phra Kaew or the Temple of the Emerald Buddha. The temple complex was crowded with both foreign tourists and Thais. 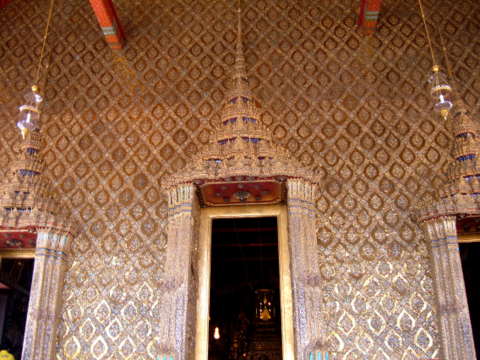 A tuk tuk ride took us to Wat Chana Songkhram, a temple opposite Khao San, an area popular with foreign backpackers. This Ayutthaya-era temple with a very unusual name was the center of the Mon community. Mons are an ethnic group which fled persecution in Burma to settle in Thailand since the Ayutthaya days. 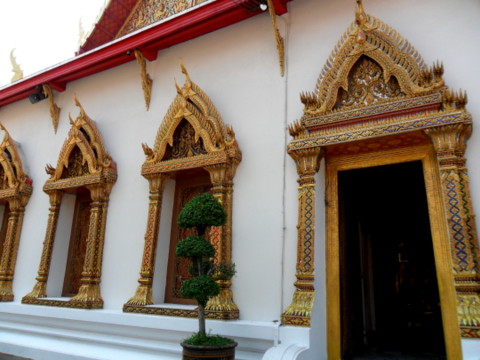 Many Mons served in the Siamese army during the Burmese-Siamese wars from 1785 - 1787 during the reign of King Rama I. Originally called Wat Klang Na, the temple was renamed Chana Songkhram or "victory in war" by King Rama I in recognition of the Mon contribution to the war effort. 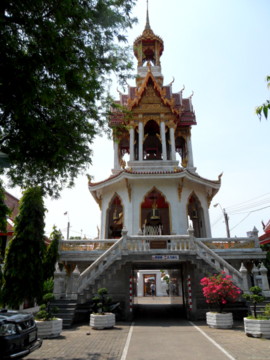 After this we took a 20 min walk to Wat Bowornniwet in Phra Sumen Road. This temple which was completed in 1832 has a long royal tradition. 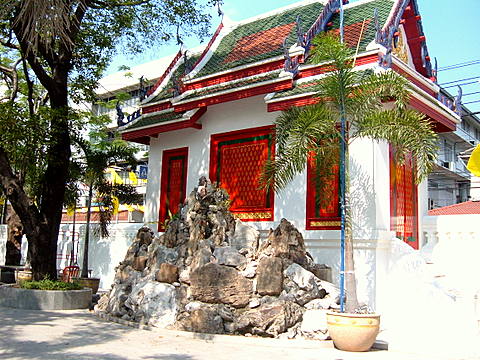 Prince Mongkut (future King Rama IV) was the abbot here and three subsequent kings of the Chakri dynasty, including the present king, ordained as monks here. 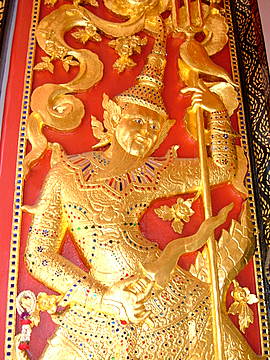 Then it was on to Wat Suthat a royal temple which took 36 years to complete, spanning three reigns (King Rama I – King Rama III). 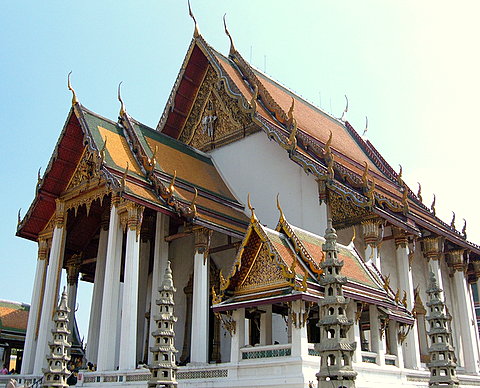 The temple is by the Giant Swing which was restored by 2007. The temple grounds are well planned and well laid out less the bustle of the tourists. 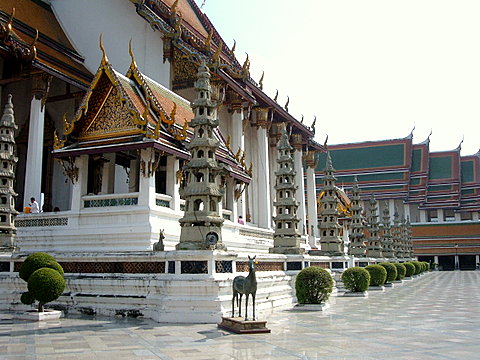 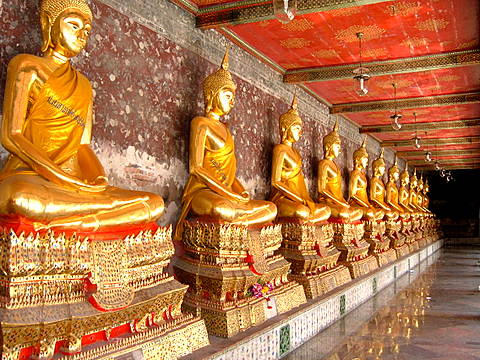 The last leg of our merit making was Wat Saket the Temple on the Golden Mount. This temple was built on an artificial mount 100 m high and 500 m in diameter. 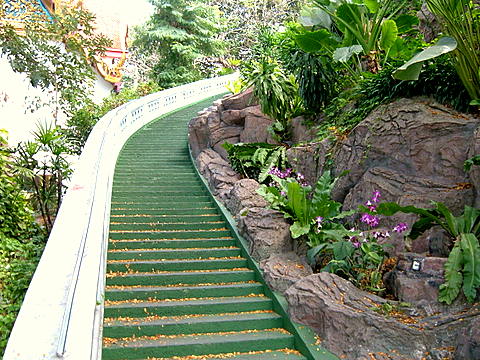 The way up to the Golden Mount

The 320 steps up to the temple were a fitting climax to the merit making for the day; a journey which was covered partly on foot, by song taew (pick up), river boat, tuk tuk and taxi. 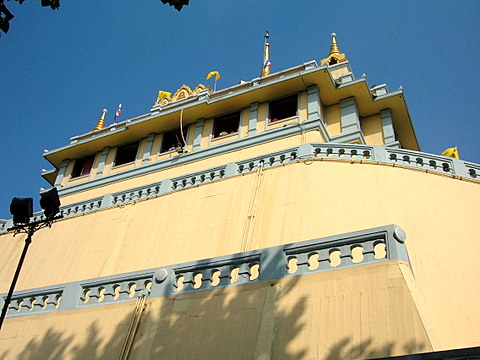 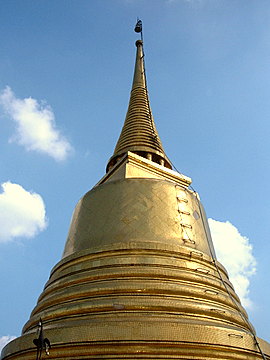 The golden dome at the top

We finished at 3:30 pm; an exhausting seven hours over 14 – 15 km but it was an enriching experience which gave an insight into life in Buddhist Thailand and an important aspect of her cultural and religious heritage. 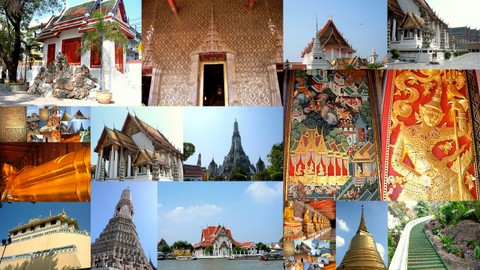 Map of the nine temples in merit making

Note ferry piers to cross the river to some of the temples.

The ferry pier to Wat Kalayanamit is at the Pak Klong Talat ferry pier.

The ferry to Wat Arun is at the Tian pier near Wat Pho.

The Wat Rakhang ferry is at the Chang pier near the Grand Palace.

All three of these temples have their own ferry piers.


To return to Bangkok Temples.