Pipit Banglamphu Museum which opened on 1 August 2014 preserves the history of Banglamphu, its communities, craftsmen, places and the way of life in this neighbourhood in old Bangkok.

At the time of writing this article, it’s the newest museum in Bangkok. Let’s explore this museum that’s housed in a building and located in an area that’s steeped in history.

Banglamphu is the area that is bounded by Phra Athit Road, Wisut Kaset Road, Dinso Road and Ratchadamnoen Avenue. Please map below. Khao San Road, the area that’s a favourite with backpackers, is in Banglamphu.

Banglamphu got its name from the Lamphu or cork trees in the area that attract fireflies.

Until recent years, there was a 100-year old Lampu tree in Santichai Prakan Park between the Thai pavilion and the Chao Phraya River.

There are several historical monuments in Banglamphu like the Democracy Monument, Fort Phra Sumen and old buildings that were formally royal residences. Let’s take a look at one of these old buildings where the Pipit Banglamphu Museum is located.

Classes were conducted in the mornings and printing operations in the afternoon providing students with practical experience. In 1946, the school ceased operations and concentrated on printing text books and major literary works in the country.

The printing house moved out of the premises in 1985 and the place was left vacant for 10 years till the lease expired. In 1995, the Treasury Department who is the landlord decided to demolish the buildings.

The result two beautifully restored two-story buildings; an L-shaped concrete building in front and a long teak building to the rear with a garden in between.

Organisation of the Pipit Banglamphu Museum

The first floor of the concrete has two sections; the first is an area for temporary exhibits for special occasions, the second section records the history of the old city, the forts and the city gates

The second floor had several rooms with exhibits on the Treasury Department, coin minting, asset management, land appraisal at different periods and locations which I will not cover in this article.

During the visit, I was wondering what all these had to do with the Banglamphu community until I remembered the 70 m baht contributed by the Treasury Department for the restoration of the buildings.

After the Treasury Department exhibits, we crossed over to the wooden building via an adjoining bridge. A Thai journalist quaintly described this building as the "world of commoners", to which most of us belong, I guess. 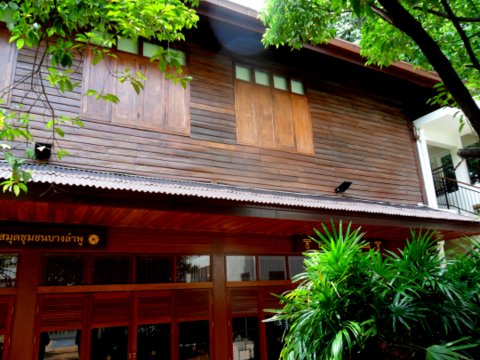 Here is where the life and soul of Banglamphu district is preserved, in the Pipit Banglamphu Museum.

The museum is extremely well equipped and organized; no expense seems to be spared.

There are touch screen videos in Thai with English sub-titles. All display boards are in English and Thai.

Old scenes have been painstakingly re-created either by models, murals or projected images.

One section on the ground floor of the concrete building in the Pipit Banglamphu Museum features the old city walls, forts and city gates.

With the destruction of Ayutthaya fresh in mind, King Rama I located his new capital on the east bank of the Chao Phraya. The old city consisted of the walled Grand Palace and Temple of the Emerald Buddha and several other royal residences. The city was protected on the west by the Chao Phraya River.

Please see map of the old city and the two defensive canal rings.


View The old city of Raattanakosin in a larger map

A wall was built on the banks of the Chao Phraya River and the Rob Krung Canal. Lao forced migrants from the earlier wars with the Lan Xang Kingdom were employed to build this wall.

To protect the city, 14 forts were built 40 m apart along the entire perimeter. There were also 14 city gates which were closed in the evenings and re-opened at dawn. 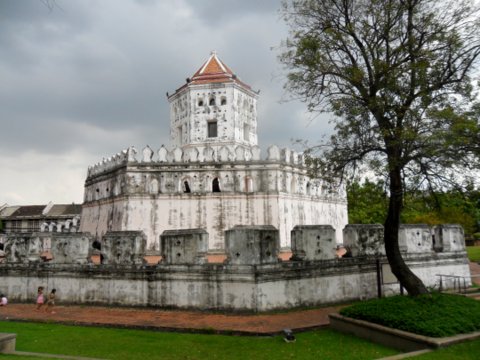 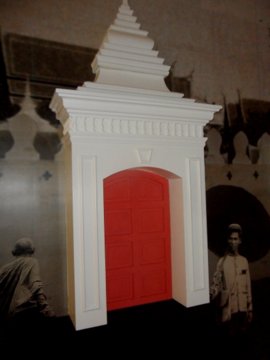 Model of a city gate

There are some interesting stories about some of these gates. One of these gates between Wat Thepthidaram and Wat Saket is called "Pratu Phi" or "Ghost Gate", near Fort Mahakarn.

This was because prisoners condemned to death were executed and buried outside the gate. Victims of a cholera outbreak were also buried here. Nobody approached this gate after dark.

There also an exhibit showing how bricks were made and laid to form walls more than 1,500 years ago. 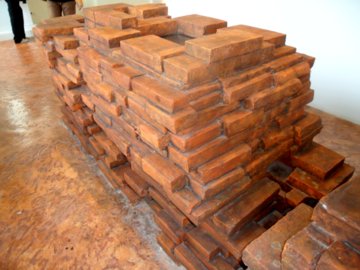 We entered Pipit Banglamphu Museum in the wooden building and were ushered into a dark room that appeared to be a library with book shelf on one side and a set of louvre doors on the other.

A tug on one of the books on the shelf and the louvre doors opened automatically to a scene of a canal in a wooded area, all projected imagery on the floor and the walls.

A silhouette of a man on a boat drifts by and the story of old Banglamphu commences. We cross over a real wooden bridge and take a walk down memory lane. 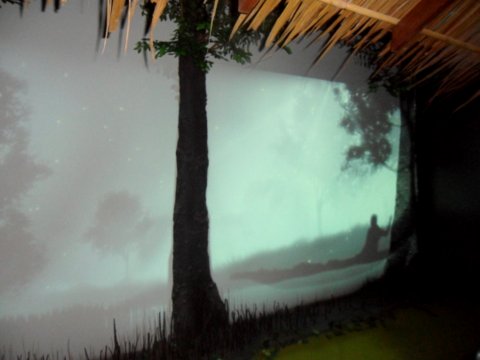 Banglamphu in the post-World War II period was a bustling commercial and entertainment center with a tram car service running down the main street. 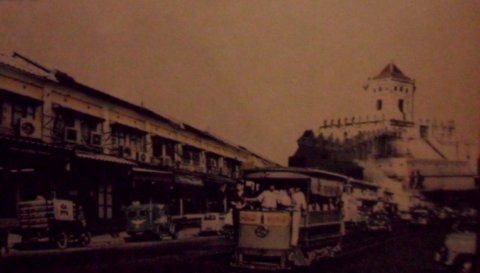 The movies were popular; a movie house that played movies all day and night at a cost of 1 satang (1/100 baht) was a hit. Likay the traditional Thai dance was another favorite. Beautifully painted murals depict scenes in the old days. 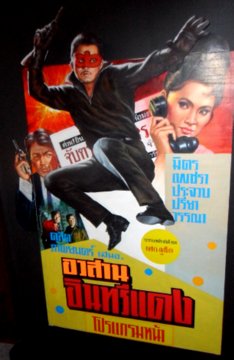 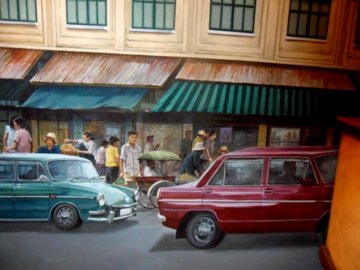 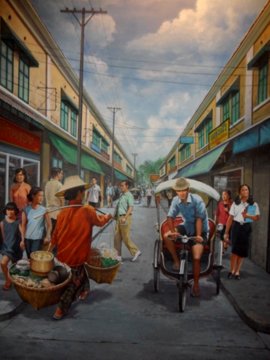 Old shops were re-created to give visitors an idea of what life was like back then; the old neighbourhood coffee shop, the cobbler selling hand-made leather shoes, restaurants and the tailor shop where people made their dresses, shirts and bought the school uniforms for their children. 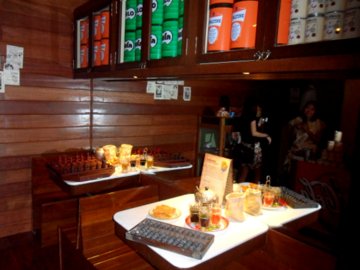 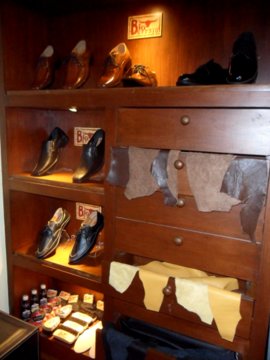 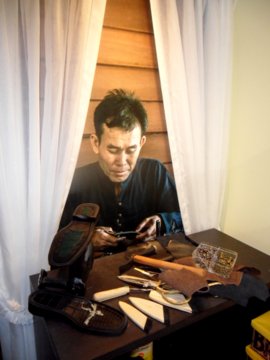 In a dark room a projected image simulated Lamphu trees with fireflies twinkling in dark, reminiscent of Banglamphu in the past.

All these are memories of old Banglampu preserved in the Pipit Banglamphu Museum.

Communities and craftsmen in Banglamphu

Wat Sangwet Witsayaram Community was a community of musicians. The neighborhood was popular for movies, musicals and drama. Today Duriyapraneet Thai Music School continues the tradition of the community.

Muslims from Pattani migrated to Bangkok in the beginning of the Rattanakosin era and their descendants make up the Chakrabongse Mosque Community. In the old days, members of this community were royal goldsmiths.

Banana stalk carving was a specialty of the Mon in the Wat Mai Amataros Community a skill handed down through generations. Unfortunately, it’s a dying art today. 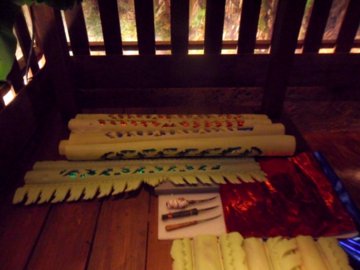 Members of the Ban Phan Thom Community are descendants of the silversmith and gold neilloware craftsmen from Ayutthaya. These craftsmen produced silver and gold bowls with elaborately etched designs. Only one shop remains today.

Bailan products made from palm leaves were the craft of people in the Wat Sam Phraya Community. Their products include hats, woven balls or takraw, fans and baskets. The last shop making these products, Lan Thong Shop has closed down. 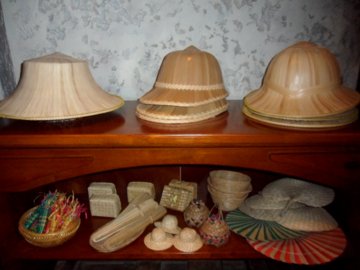 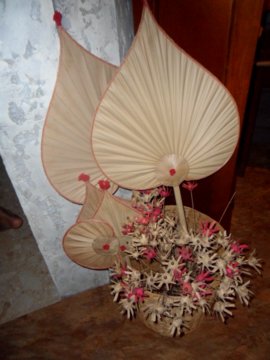 The Bowon Rangsi Community is more than 100 years old and they were the flag makers of Banglamphu. Today only the Thong Wan Chart Flag Shop is left. 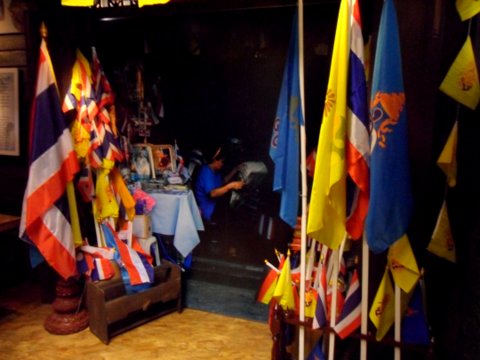 The Saviour of Banglamphu

The last section of our tour of the Pipit Banglamphu Museum features the golden Buddha statue called Phra Buddha Banglamphu Prachanat or the Saviour of Banglamphu.

This statue was originally kept in Wat Bornwornniwet and taken out once a year during Songkran in a procession from the temple to Santichai Prakan Park for residents to worship.

On 8 August 2014, the Buddha statue was moved to the museum and kept permanently there. 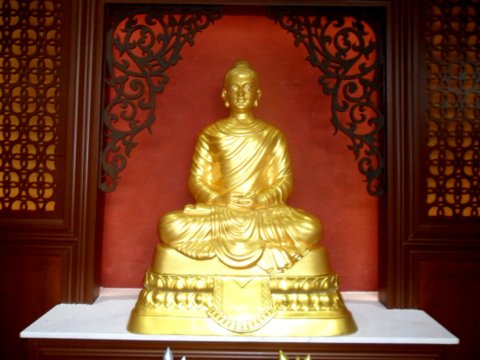 The Saviour of Banglamphu

In the course of urban development, all but two of the 14 old forts were demolished. Only Fort Phra Sumen and Fort Mahakarn remain. Most of the old wall was destroyed too except for short sections near the two surviving forts.

At the end of 2011, severe floods, the worst in decades, hit northern, central Thailand and Bangkok. Banglamphu being on the banks of the swollen Chao Phraya was not spared. The 100-year Lamphu tree, the last Lamphu tree in Banglamphu, was swept away. Fireflies haven’t been seen in the neighbourhood for a long time.


View Banglamphu in a larger map

Walk through the park past Fort Phra Sumen till you see a white concrete building. That’s the museum.