The Bangkok BRT or Bus Rapid Transit is a special bus service linking the mass rapid transit systems in Bangkok to provide an integrated public transport service for the city and her suburbs.

On 15 May 2010 the first Bus Rapid Transit line commenced service linking Sathorn to Ratchapruek across the Chao Phraya River in Thonburi. 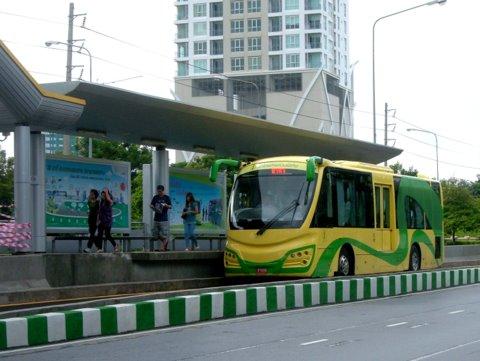 Latest entry to the streets of Bangkok

This is the first of 14 Bus Rapid Transit lines ultimately serving the greater part of the city in the next decade. In the first phase, there will be five BRT lines. These are:

Connecting to mass rapid transit and other transport

The existing and planned Bangkok BRT lines will link to existing skytrain and subway lines and planned mass rapid transport lines. One BRT line will also connect to the Suvarnabhumi Airport rail link.

Currently the Sathorn – Ratchaphruek line links to the Silom line of the skytrain at S3 Chong Nonsi and S10 Talat Phlu.

Features of the Bangkok BRT

These custom-built air-conditioned buses run on dedicated bus lanes on the outer lanes of the road. 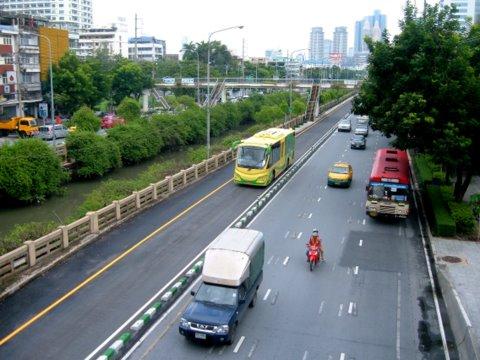 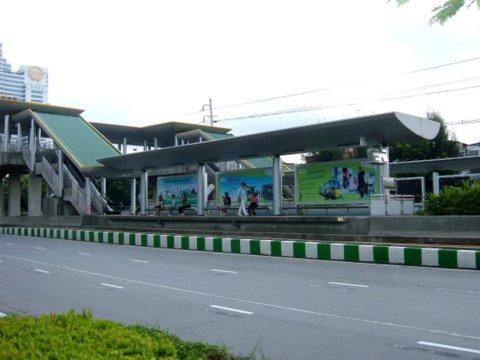 These platforms can be accessed by stairways or escalators on both sides of the road. 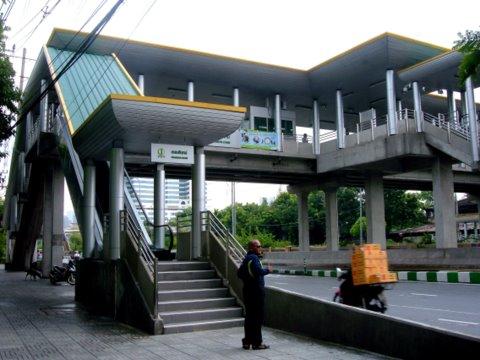 Way up to the BRT bus station

There are ticketing offices up in the overhead bridges for purchase of tickets before boarding the buses. 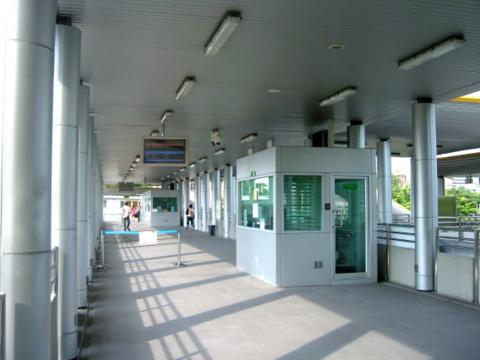 Presale of tickets before boarding

System maps are on display in the overhead bridges showing the bus route and the various stations. 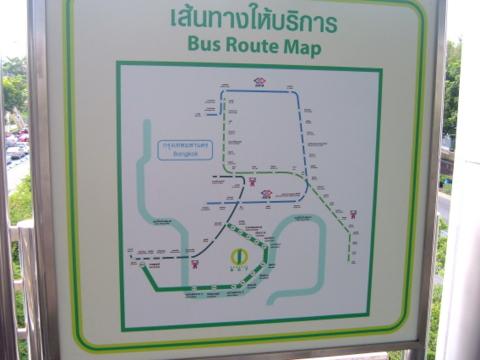 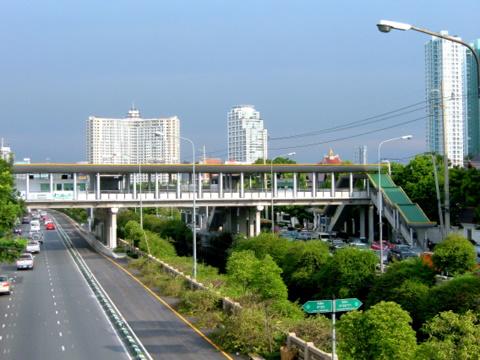 View of the BRT station

On board each bus, a TV display behind the driver displays the station where the bus is at with announcements for each station in Thai and English. The TV displays are no longer available. 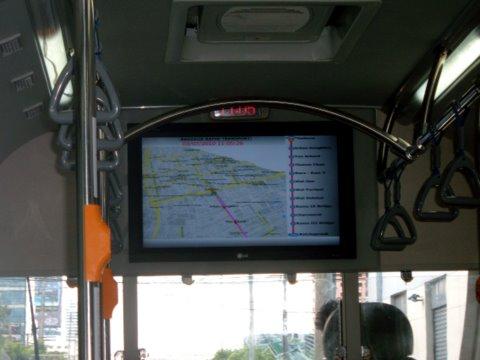 This is the first line to come into service. It covers 15.9 km and travels along Narathiwat/Rajanakharin Road, Rama III Road which loops along the sharp bend of the Chao Phraya to end at the junction of Ratchadaphisek and Ratchapruek Roads near The Mall Tha Phra on the other bank of the Chao Phraya River. 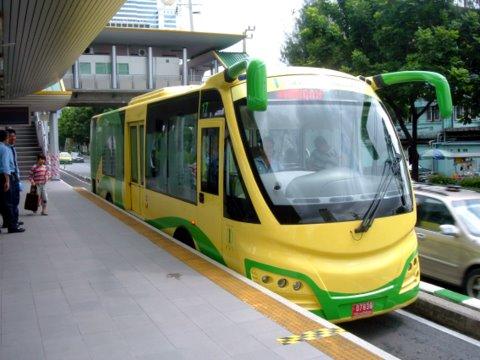 The route has 12 stations:

This effectively gives commuters connecting rides to the skytrain and subsequently the subway. 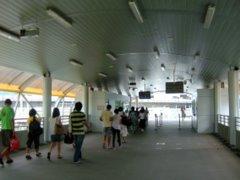 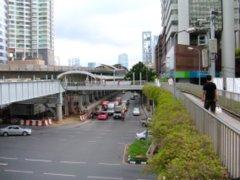 With effect from 2 January 2011, new ticketing machines have been installed at all the BRT stations along the Sathorn-Ratchapruek route. 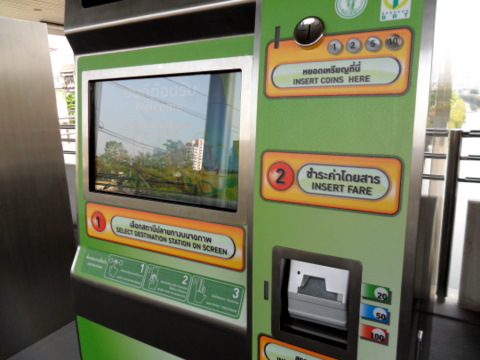 These touch screen terminals are easy to use. Just touch the screen and the route map will appear. Touch your destination station on the map, insert the amount indicated and get your ticket. 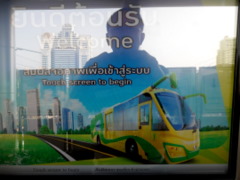 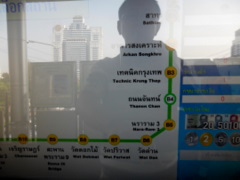 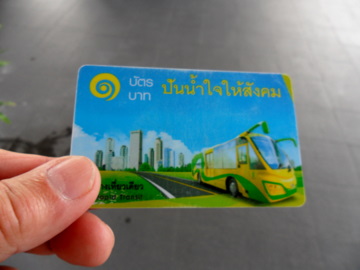 These tickets are slotted into the entry gates like the tickets for the Bangkok skytrain.

Hotels along the BRT Sathorn - Ratchaphruek

Here are the hotels along this BRT line grouped according to the nearest BRT station.

Here’s a map showing the Bangkok BRT Sathorn – Ratchaphruek route and the stations along the line as well as the connecting skytrain stations.

Benefits of the Bangkok BRT

The Bangkok BRT provides safe, comfortable and convenient bus travel in Bangkok. Although the majority of commuters are local residents, visitors to Bangkok will find this service useful too as it allows them to see a side of Bangkok that’s rarely seen by tourists. 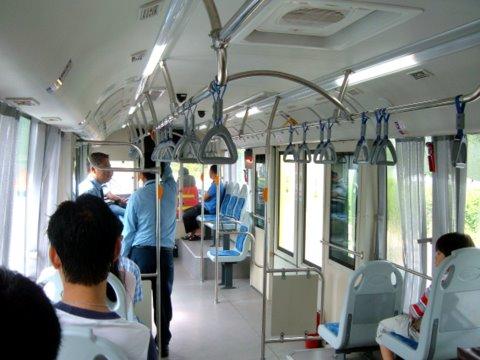 On board the BRT on a Saturday morning

More importantly the Bus Rapid Transit system when fully implemented connects to existing and planned mass rapid transit systems, other auxiliary transport like buses, mini-buses, taxis and river boats. This will give the city and her suburbs an integrated transport network. 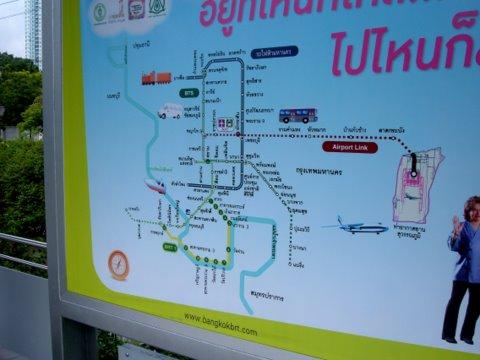 Existing lines and their extensions