Black May 1992
the last shot fired in anger?

The seeds of the Black May 1992 tragedy were sowed four years earlier. The government of General Chatchai, elected in 1988, was a dismal period of political wheeling and dealing which pandered to vested business interests and rampant corruption.

The rich takings by the ministers gave rise to the term “kin mueang” (literally eating the state) and aptly translated to “buffet cabinet”.

On 23 February 1991, the disgruntled military led by General Sunthorn and General Suchinda Kraprayoon staged a coup and deposed of General Chatchai at gunpoint.

Parliament was sacked, General Chatchai and his colleagues were charged with corruption.

Well-respected Anand Panyarachun, President of the Federation of Thai Industries, was appointed interim PM and a new constitution was proposed. The military sponsored constitution was opposed by democracy groups. The corruption continued unabated. Only the generals in charge have changed.

Elections were scheduled for March 1992. The military backed Samakkhitam Party won the majority and formed the government. Prior to the elections, General Suchinda promised publicly that he was not going to be the next PM as it was not his intention to seek power.

This promise was broken soon after the elections. General Suchinda became PM after the withdrawal of the initial candidate.

There was a massive public outcry, particularly from the educated middle-class in Bangkok, organized by ex-governor of Bangkok, General Chamlong Srimuang. On 17 May 1992, 200,000 demonstrators massed near the Democracy Monument.

General Suchinda ordered military units loyal to him to quell the demonstrators. The military violence raged for four days from 17 – 20 May 1992. For the third time in 20 years, Thais were shedding Thai blood in the shadow of the Democracy Monument.

Many Thais in the country were not fully aware of the carnage as the Thai media was under state control. The foreign media however wasn’t. Thais living overseas saw the news and informed their countrymen in Thailand. It was only then that the tragedy hit home.

On 20 May 1992, Generals Suchinda and Chamlong were summoned for a royal audience which was televised live nationwide.

The royal audience amounted to a reproach to the protagonists for the appalling loss of lives. General Suchinda resigned, new elections were announced and the crisis was defused.

By the end of May and early June national television showed the full extent of the military violence to a stunned Thai public.

Anand was appointed interim PM once again in June 1992. The discredited military slunk back to their barracks as their prestige sunk to an all time low.

After the political turmoil of Black May 1992, elections were held on 13 September 1992.

The Democrat Party under Chuan Leekpai took office. Since then, there have been no further upheavals of governments elected by popular vote until the 19 September 2006 coup.

Year after year, annual commemoration ceremonies are still held in memory of those who perished. Families of the victims have yet to receive compensation. A memorial for the victims has yet to be constructed.

The Black May 1992 Memorial

In May 2007, the Bangkok Metropolitan Authority approved 25 m baht (US$0.75 m) for a memorial in Santiporn Park at the site of the former Public Relations Department in Ratchadamnoen Avenue.

The victims of Black May 1992 will finally get a memorial. On 12 May 2008, it was reported that the monument is scheduled to be completed in May 2009.

Relatives of the victims who formed the May Heroes Relatives Group will, at long last, see the results of their ten year effort to have the sacrifice of their love ones recognized, even if truth and justice still eludes them.

To return the Democracy Monument. 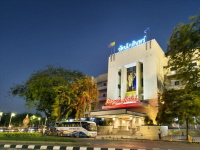