Buddha image casting is a major merit making ceremony in Thailand and I had a chance to witness this elaborate ceremony in casting a bronze Buddha statue at Wat Tho Yai in Chonburi.

It’s a rare occasion when a Buddha image or statue is cast. I was fortunate to be invited by a Thai friend to one held at Wat Tho Yai on 14 February 2013.

Wat Tho Yai is in Amphur Ban Bueng, Chonburi about 20 km from Chonburi city, a local temple just outside Ban Bueng town.

What struck me when we reached the temple by mid-morning were the many odd shaped rocks scattered in the temple grounds. These rocks I was told were transported all the way from Kanchaburi in western Thailand. 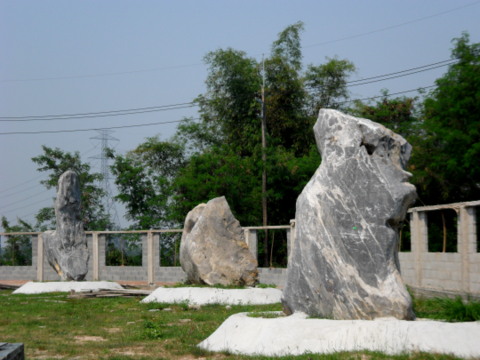 There were also several cows grazing in the grounds. These were donated by temple members who wished to make merit or seek forgiveness. The donors must pledge not to deal in or consume beef. 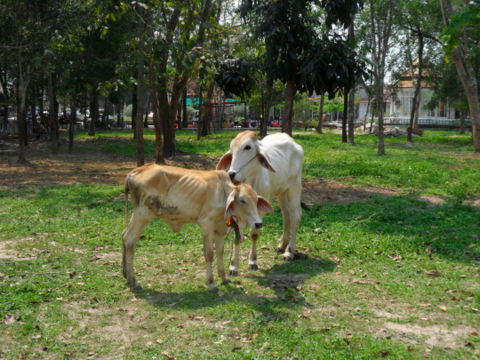 There were already many worshippers there making merit by offering alms to the monks seated in a row. Others bought flowers to be offered at the altar. 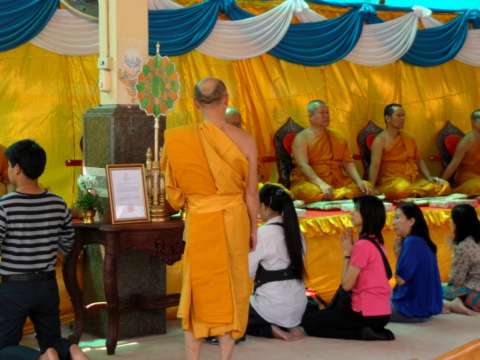 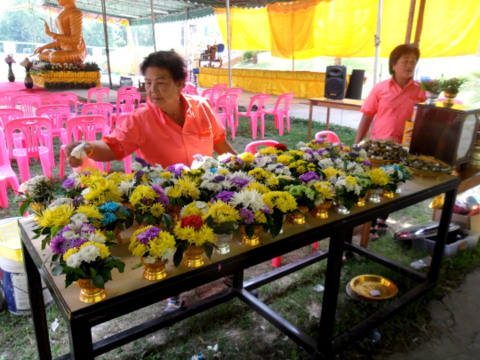 These square gold pieces of paper were for worshippers to write their full names and dates of birth. The paper was burnt in the furnace during the Buddha image casting ceremony. 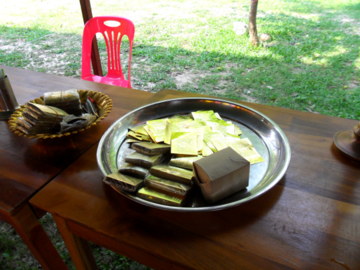 By noon lunch was served to all the visitors and at one in the afternoon, the ceremony began. 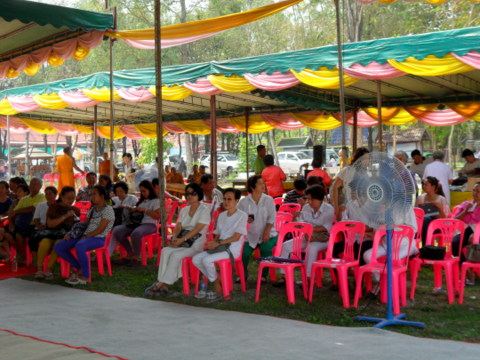 The heat was intense; from the furnace, the molten metal and the blazing afternoon sun!  These improvised brick furnaces were where the bronze bars are heated in charcoal for a couple of days. 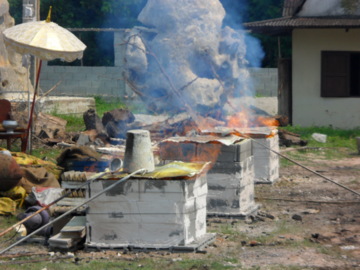 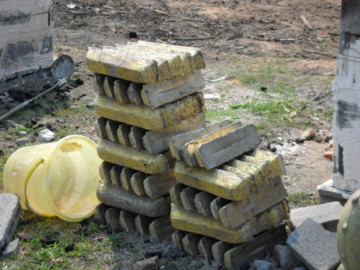 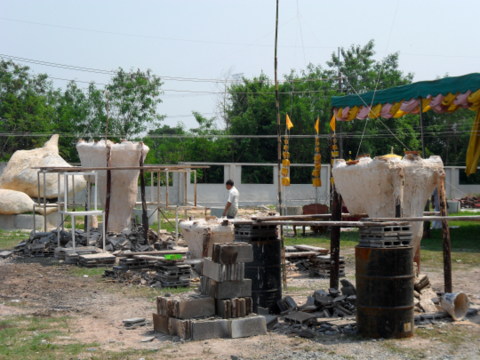 Before the start of the Buddha image casting ceremony, four monks sat at each corner of the field where the casting was done. 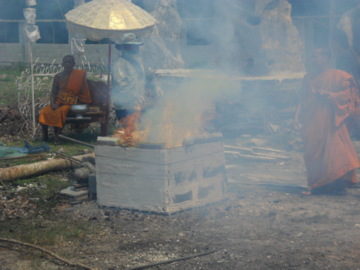 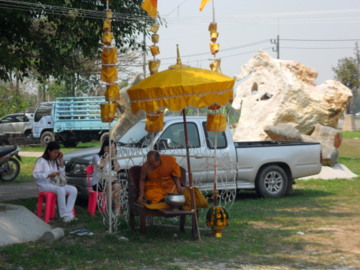 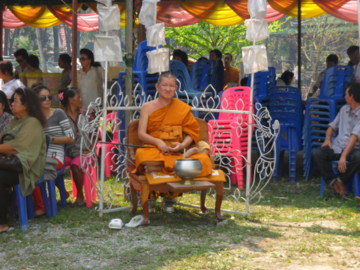 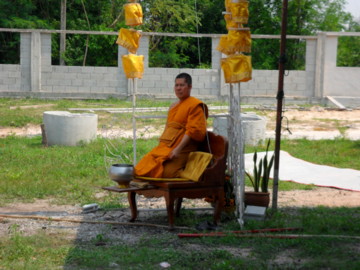 The pieces of gold paper were then burned in the furnace before prayers were conducted before this table. 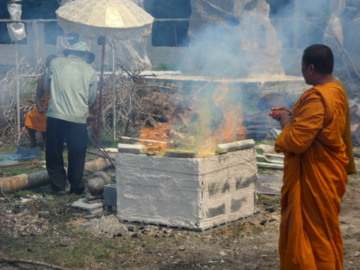 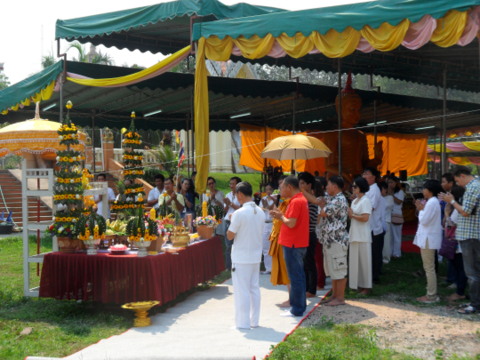 Then the arduous task of casting began.

The metal bars with hoops in the centre were used to lift the buckets of molten bronze up from the blazing furnaces and then carefully poured into the three moulds.

The abbot of the temple and the other members were praying while this was going on. 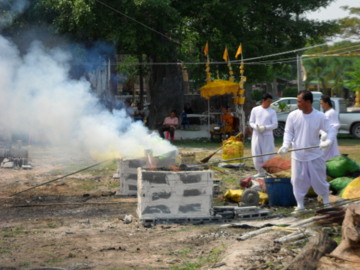 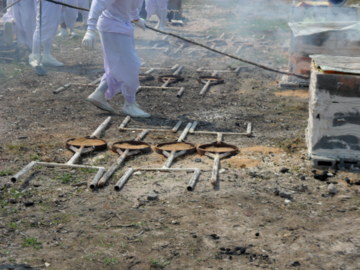 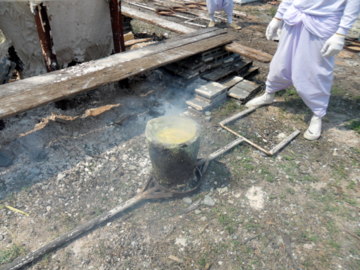 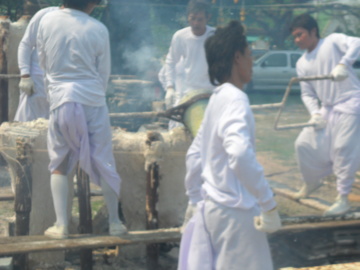 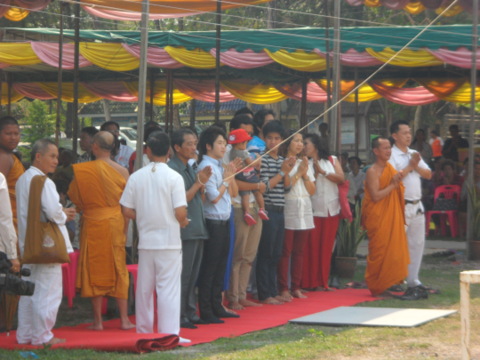 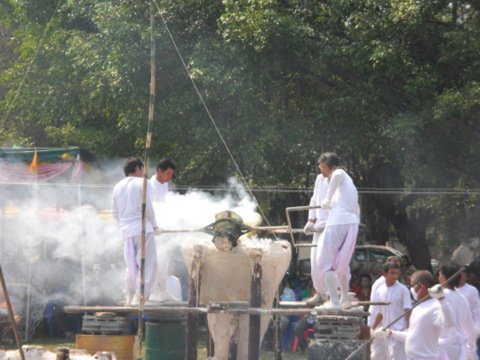 After about half an hour of very hard and intense work, the casting was done; everyone helped to clear up the place and then made their way home.

It takes a couple of hours for the molten metal to harden but for complete setting it takes two days. The Buddha statues are polished up and in a month’s time or at an auspicious occasion installed in the temple.

Map to Wat Tho Yai


View Wat Tho Yai in a larger map

If you are driving go through Chonburi city and take the turning on the left to Ban Bueng into highway 344.

Go all way past Ban Bueng town and continue till you see the arch for Wat Tho Yai on the right.

Make a U-turn to get back to the other side of the road and turn left into the road leading to Wat Tho Yai.

I am grateful to Luang Por, Phra Khru Wimon Thamma Thi Rak, the abbot of Wat Tho Yai for his kind permission in allowing me to photograph this ceremony and for the information provided.

My thanks to Suganya Thawornsiri for inviting me to this very rare and interesting Buddha image casting ceremony in Wat Tho Yai. Suganya produces Thai cultural documentaries for ThaiCom satellite television.