Christ Church, an old Protestant church in Bangkok, dates back to the early Protestants in the 19th century who laid the foundations for the Protestant Church in Thailand.

The first Protestant missionaries arrived in Bangkok in 1828, from the London Missionary Society representing the Church of England.

The American Protestants followed over the next two decades.

One prominent American missionary who arrived in 1835 was Dr Daniel Bradley, who taught English to Prince Mongkut, the future King Rama IV (1851 – 1868).

With the growing foreign Protestant community in Bangkok over the years, the idea of having their own church took seed. In 1861, King Rama IV granted land for a church in Charoen Krung Road near the Chao Phraya River.

Contributions from the foreign Protestant community, the British government and the Borneo Company, a large trading company in Southeast Asia, provided funds for the construction of the new church.

Completed in 1864, the new church wasn't called Christ Church then. Officially named the Protestant Union Chapel, it was commonly referred to as the English Church owing to its predominantly English-speaking congregation.

The English Church remained in Charoen Krung Road until 1904. As the foreign Protestant community grew larger by the early 1900s, a bigger and more centrally located church was required. 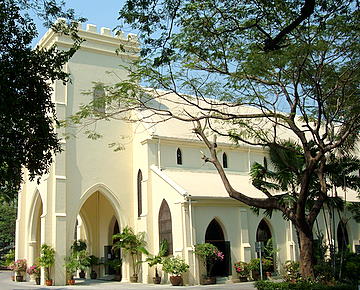 The new church in Convent Road

In 1904, King Rama V granted a bigger plot of land at the junction of Convent and Sathorn Roads. A condition that came with the royal grant was that the church would be open to all Protestant Christians regardless of nationality or sect.

Please see map to the church. 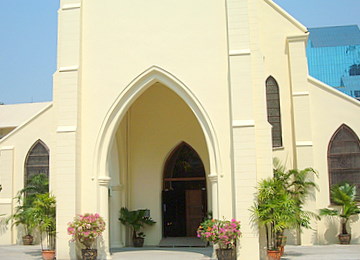 Open to all Protestants

Sathorn Road at the turn of the 20th century was a farming and orchard area with a klong (canal) running down the center, very much like neighboring Silom Road. Today, it's an area popular with foreign embassies, office towers and up-market condominiums.

This new church in Convent Road was completed on 30 April 1905. One feature from the old church that was transferred to the new is the stained glass windows with their biblical images. The window with the crucifixion takes centrepiece behind the Communion Table. 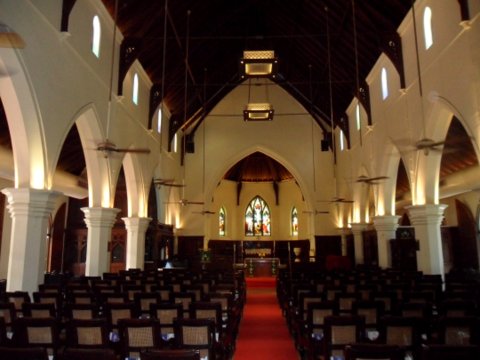 Breaking away from the tradition of naming the church after a saint, the members settled for the simple and appropriate name, Christ Church.

In 2005 the English church in Convent Road, celebrated its centenary, more than 175 years after the first Protestant missionaries set foot in Bangkok.

For the official website of the church, please see Christ Church Bangkok. 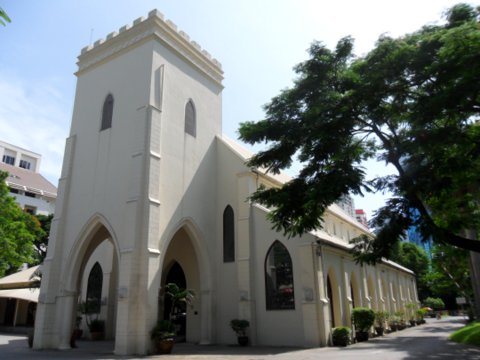 Update on the renovations of the church

3 March 2008 - These photos were taken after the repainting of the exterior walls was completed in late February 2008. The interior of the church is still undergoing repairs. We’ll be bringing you more photos of the beautiful stained glass windows once the work is completed.

14 June 2008 - I visited Christ Church again today as the re-plastering and repainting of the chapel has been completed. Here are the pictures of the stained glass windows in the chancel.

2 August 2013 - I visited the church again on 2 August 2013 and met with Gerrit Booyens who kindly invited me into the chapel and briefed me on the latest developments since my last visit in 2008.

In August 2012, the stained glass windows have been completely refurbished. The protective wire mesh was removed and a layer of laminated glass laid over the surface.

This has the effects of letting more light in and makes the images clearer. So I have replaced the photos of the stained glass windows with the latest shots. 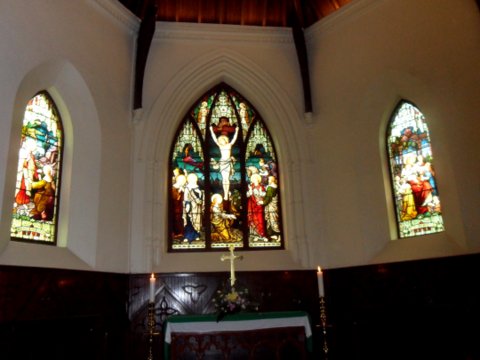 These windows were installed when the new church was built in Convent Road in 1905. The crucifixion is the main window directly behind the Communion Table. 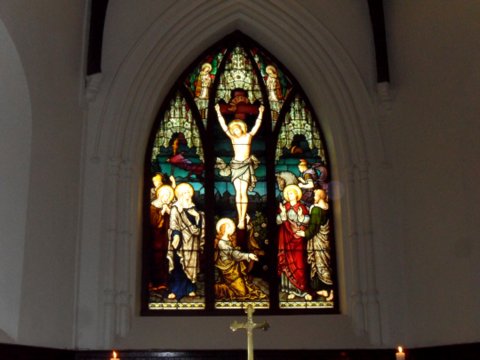 The window with Christ and the little children is to the left of the main window. 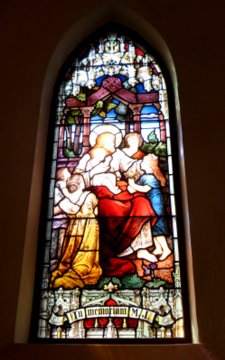 “Suffer the little children to come unto me,and
forbid them not: for such is the kingdom of God.”
(Mark 10:14)


The window to the right shows Jesus appearing before Mary Magdalene and the other Mary on the morning of His resurrection. 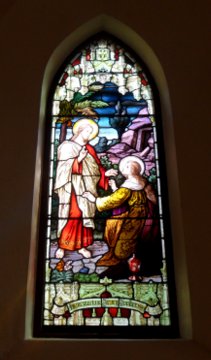 This window is in memory of Henry Hooker a loyal supporter of the church who died in Bangkok in 1909.

In my previous visits I missed the stained glass windows at the rear of the church. So here they are: 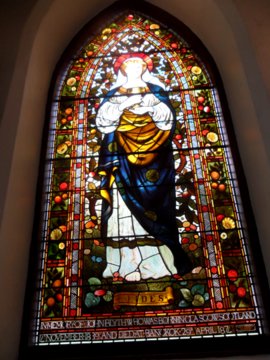 This memorial window "Faith" is in memory of R J Blythe, a manager in the Borneo Company who was "a faithful worshipper and generous supporter" of the old church in Chareon Krung Road.

This is the only stained glass window from the old Protestant Union Chapel in Charoen Krung Road.

The last stained glass depicts Jesus calming the waves in the Lake of Galilee. 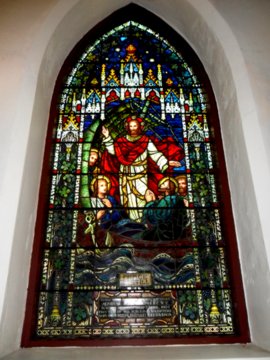 "O you men of little faith! Why are you so frightened?"
Matthew 8:26

Other facilities in Christ Church include Rainbow Land a kindergarten that runs from Mondays to Fridays. Three times a week expatriate parents and their young children have a social gathering in the church community hall. This is to facilitate interaction between parents as well as between the children. 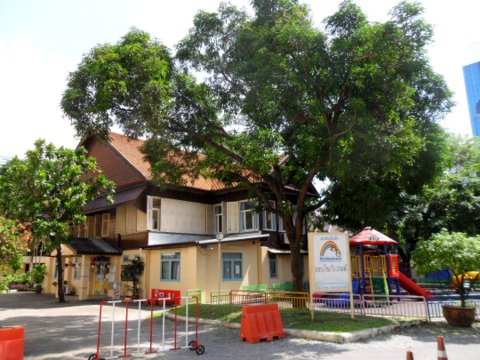 Lastly at the northern end of the church grounds just next to the BNH Hospital, there a little field with a white cross. This is the Memorial Garden, where church members can request to have their ashes placed within vaults in the walls with their photos attached. 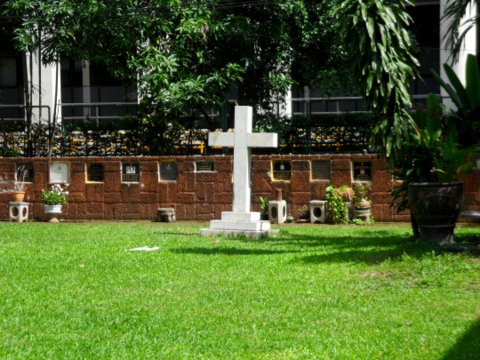 Christ Church at the junction of Convent Road or Soi Convent and North Sathon Road just next to the BNH Hospital.

The other landmark is the St Joseph Convent next to the hospital. Convent Road is named after the walled convent started by the Carmelite Order of Nuns (see top pointer in the map).

To get there take the Green Line (BTS Sky Train) to S2 Sala Daeng Station in Silom Road. Leave the station at exit 2.

Walk along Silom Road and turn left into Soi Convent. Continue till you reach Christ Church at the other end. If you're coming from Taksin Bridge, it's easier to drop at S3 Chong Nonsi Station.

Get out at exit 3. Walk to the junction of North Sathon Road, where the Standard Chartered Bank is located. Turn left and continue on till you reach Soi Convent.

I would like to express my sincere appreciation and gratitude to Reverend Peter Cook and the staff of Christ Church for kindly granting permission to take the photographs for this web page.

A hearty thank you to Gerrit Booyens for the additional information he has given me during my visit on 2 August 2013 and again on 9 August 2013 and for kindly allowing me to take the latest photos inside and outside the church.

For other old Bangkok churches.

"A Century of Fellowship - Yesterday, Today and Tomorrow" the book published in 2005 to commemorate the centenary of Christ Church. 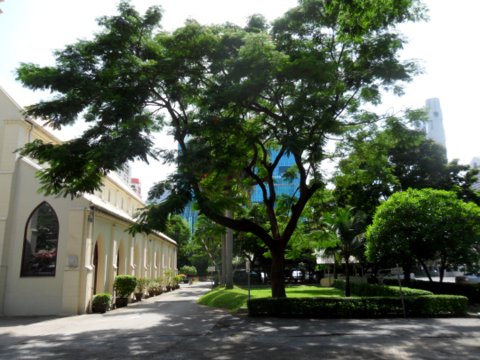 This is my first e-book and if you are an independent traveler, this handy e-guide book will help you along as you explore the streets of Bangkok and discover its old treasures. It's complete with historical descriptions, maps and detailed directions on how to get to these places.