The Klong San Museum is one of the local or community museums set up by the Bangkok Metropolitan Authority to preserve the local history, culture and knowledge of communities in the various districts in Bangkok.

This project to establish community museums in some of the older districts in Bangkok started in 2003. By 2008, 26 such museums were completed in Bangkok.

I stumbled upon this museum by accident.  It was while I was visiting Wat Anongkharam in Klong San that I discovered the existence of this local museum within the temple grounds.

The visit to this museum proved to be far more interesting than my visit to the temple.

To get there, please see map to the museum

Organisation of the Klong San Museum

The Klong San Museum is located on the second floor of the library in the grounds of Wat Anongkharam. 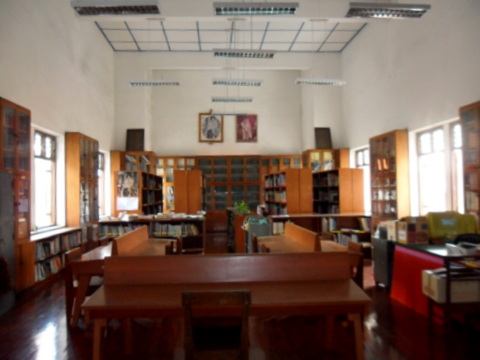 Second floor of the library

This community museum, which takes up half the floor space on the second floor, is divided into four sections.

Klong San is one of the 50 districts in Bangkok. It’s located on the west bank of the Chao Phraya River where the Taksin Bridge spans the river. The district derived its name from the Klong San canal that runs through the northern part of the district.

Since the reign of King Rama V, the district has gone through a number of name changes and was initially part of Bangkok and then Thonburi

In 1957 the area was re-established as Klong San district under Thonburi which was then still a separate province. With the merger of Thonburi to Metropolitan Bangkok in 1972, Klong San became part of Bangkok.

Klong San has three canals running across the area from west to east draining into the Chao Phraya River. In the old days when there were fruits orchards in the area, water from the canals was used to water the orchards. The water in the canals today has become badly polluted. 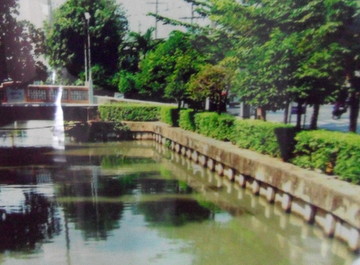 With the opening of Siam to foreign trade in the mid-1800s, foreign sailing ships docked on the Chao Phraya near Klong San. Commerce prospered with the entry of more foreign traders. 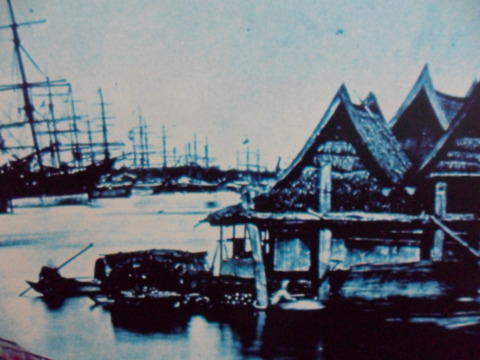 In the 20th century new bridges spanned the Chao Phraya to Klong San and Thonburi. With these bridges came new roads. Soon the old way life had to give way to modern development. 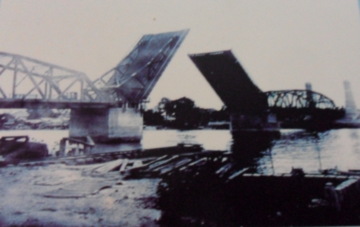 Trade with China flourished in the Thonburi era (1768 – 1782) when King Taksin established his capital in Thonburi after the fall of Ayutthaya.

Chinese traders flocked to Thonburi and anchored their ships at the mouth of the Bangkok Yai canal, the old course of the Chao Phraya all the way to Klong San.

Many settled in the Bangkok Yai and Klong San area.

In 1855, The Bowring Treaty opened up Thailand to foreign trade with the European nations and brought more ships to Bangkok. 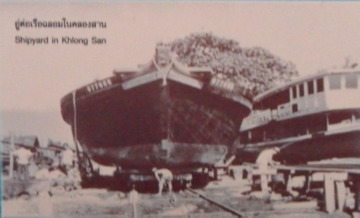 Besides the Chinese and European traders, the Indians and Muslims added to the cultural diversity in Klong San district. The temples, shrines and mosques present in the district today are testament of this cultural diversity. 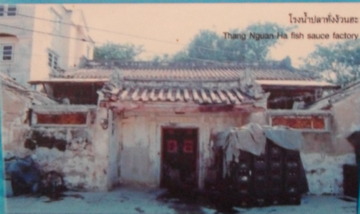 The Tha Chin-Klong San railway linking Klong San to Samut Sakhon provided for the transport of raw material from Samut Sakhon to the factories and processing plants in Klong San. This railway is no longer operational.

When the Bombay Burma Sawmill got a teak concession in Siam, teak logs up-country were floated down the Chao Phraya and processed in the sawmills in Klong San.

The Klong San Hall of Fame lists a number of famous residents from the district.

Master Tuean Phatthayakul, a musician, composer and craftsman, won the National Artist (Thai Classical Music) award in 1992. He learnt music since the age of seven and specialized in woodwind and string instruments like the Thai three-string fiddle. 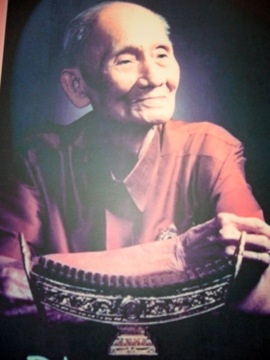 He was also a composer and a skillful craftsman who made musical instruments as well as miniature pieces. From his home, the Phatthayakul House in Klong San, Master Tuean taught Thai classical music and dance. 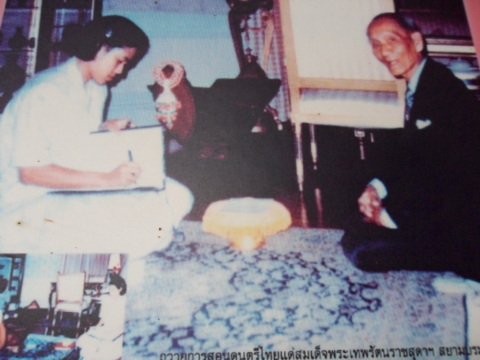 After his death in 2003, the music school moved out of Klong San.

Somchai Luanwillai is a renowned Khon mask maker whose skillfully crafted Khon masks are in great demand. He has started a vocational training group at Ban Khon Thai to teach the Khon mask making skills to new generations of craftsmen. Ban Khon Thai is located in Soi Chareon Nakhon 9 opposite Wat Suwan. 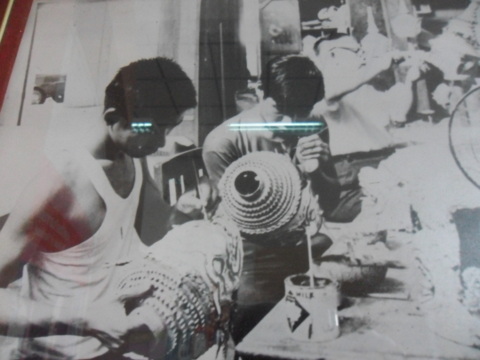 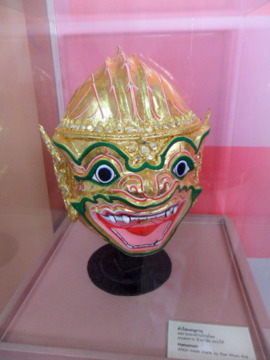 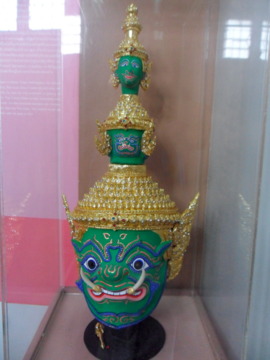 Ravana – the demon king of Lanka

Nang Chanthraman – cotton products Nang Chanthraman, "Pa Nang" (Auntie Nang), a native of Khon Kaen came to Klong San in 1976. Being killed in weaving she started a weaving industry among her Issarn neighbours in Soi Charoenrat 5. 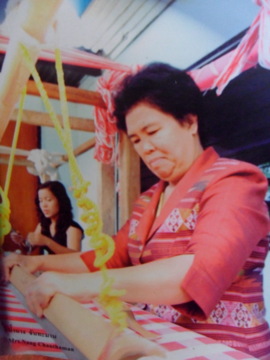 This group in her community made cotton products like shawls, scarves and other material. In 2003 their products won the five-star OTOP* award.

*OTOP (One Tambon One Product) was a project started in 2001 to promote the indigenous products in the sub-districts (tambon) of Thailand in order to boost local economies and incomes. 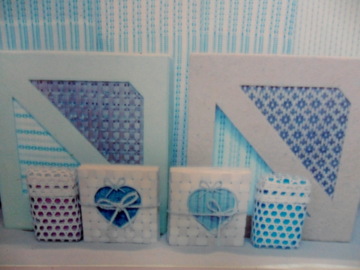 To increase production capacity she has enlisted the help of her relatives in Khon Kaen. Today Pa Nang (Auntie Nang) cotton textiles are now well-known products. 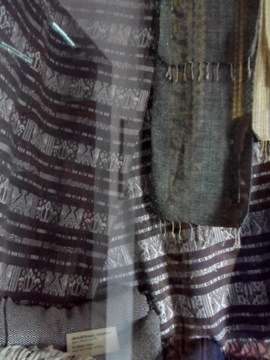 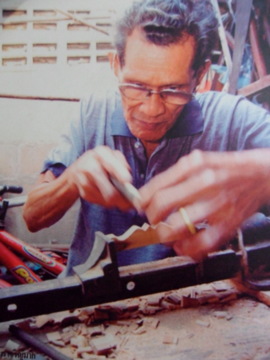 In 2001 with government support he started a vocational group to teach and preserve the traditional carpentry skills; no machinery is used only basic tools like the chisel, hammer and saw. 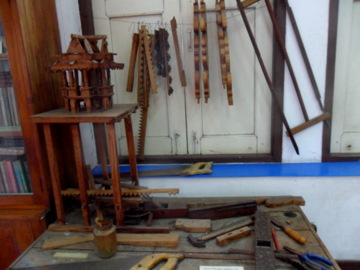 This vocational group, which specializes in making teak altars, is located at Soi Chareon Nakhon 23. 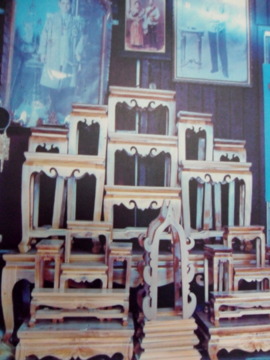 The Ban Fuen community has a long family tradition of carpenters making teak spirit houses. Many of their ancestors worked in the sawmills in Klong San in the early days. 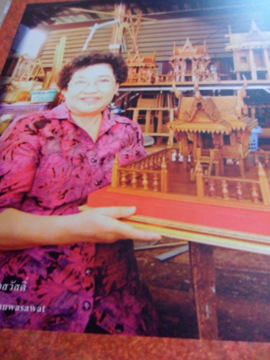 Somsong Phuwasawat’s parents used to work at the Bombay Burma Sawmill and made spirit houses from the wood scraps to augment their income. When the sawmills closed down, her family took up the making of spirit houses as a profession. 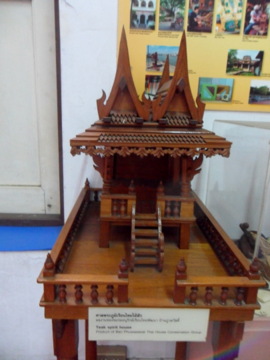 Currently there are 10 families engaged in this trade around Wat Suttharam with Somsong as their community leader. The community is located in Soi Chareon Nakhon 46 along the Bang Sai Kai canal.


View Klong San - location of craftsmen in a larger map

The fourth room is dedicated to the Princess Mother who lived in Klong San district at one time. There is a park in Klong San in memory of her.

Unfortunately this room was locked during my visit as the administrator wasn’t in. Perhaps next time then.

Map to the Klong San Museum

To get to the Klong San Museum, take the Green Line (BTS Sky Train Silom Line)  to S8 Wong Wian Yai Station. From there, take a taxi to Wat Anongkharam.

Get the hotel staff to write out the name of the temple in Thai to help you ask for directions.

It’s easier if you approach the museum via Soi Somdet Chao Phraya 1, then turn right (please see route marked on the map).

Going through the temple grounds can be a bit confusing.

Admission is free. Please remove your footwear before entering the library and museum.

Community museums like the Klong San Museum are basic and operated on a tight budget. They lack the sophisticated high-tech gadgetry of some of the other newer and richer museums.

But these local museums in their simple way are a rich source of local knowledge of the old communities in Bangkok by preserving their heritage.