Monument to the
Expeditionary Force
someone still remembers

The Monument to the Expeditionary Force in Bangkok is dedicated to the Thai soldiers killed on the Western Front in Europe during World War I.

It's not widely known that Thailand deployed an expeditionary force to fight on the side of the Western powers during the Great War in Europe 1914 – 1919.

At the northern edge of Sanam Luang near the National Gallery, there's a neat garden with well trimmed hedges.

In the center stands a white four-sided structure topped with a chedi-like spire.

This is the Monument to the Expeditionary Force with the names of the dead inscribed on the sides; 9 on the western face and 10 on the eastern face. Some of them were just 21.

In the reign of King Vajiravudh or King Rama VI, World War I broke out between Britain/France and the Central Powers made up of Austria-Hungary, Bulgaria, Germany and the Ottoman Empire (Turkey).

When the USA entered the war in April 1917, it became clear that they would tip the balance against the Central Powers.

Thailand decided to join the Western allies. Why did Thailand join in a European war among mostly colonial powers?

King Vajiravudh's leaning to the Western allies may be no surprise.

He was the first Thai king to be educated overseas, having studied at Oxford, trained at Sandhurst and served in the British Light Infantry. The call to war was a fight for right and civilization. 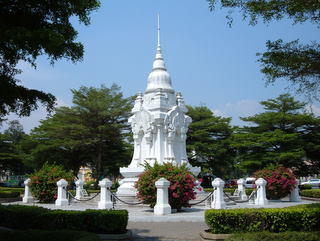 But there was a political reason; the troop commitment could provide future leverage with the West to rid Thailand of the unequal extra-territorial treaties which exempted foreign nationals from Thai laws and tariffs.

As the war progressed, Thailand feared that her neutrality might be held against her later. On 22 July 1917, Thailand declared war on the Central Powers and committed 1,300 troops.

The Thai contingent arrived in France in 1918 flying the new tri-color national flag embodying the national trinity; white for religion, blue for the monarchy and red for the blood of the people prepared to sacrifice in defense of the nation.

The Thai expeditionary force consisted of detachments from the Army Air Corps, Army Transport Corps, field ambulance and maintenance under the command of Major-General Phya Pijaijarnrit.

At the end of the war, the Thai contingent joined in the victory parade in Paris on 19 July 1919. They returned to Thailand on 21 September 1919.

The 19 dead, cremated earlier in Europe, had their ashes enshrined in the Monument to the Expeditionary Force on 24 September 1919 after religious rites in Wat Mahathat nearby. 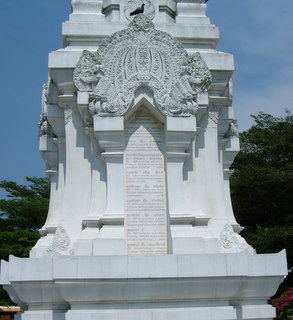 The names of the fallen


The Monument to the Expeditionary Force is one of two war memorials in Bangkok. The other is the more prominent Victory Monument for the Franco-Siamese War in 1940/41.

Compared to her allies, Thailand's military commitment was small, time spent on the Western Front short and losses light. British losses in the Battle of the Somme were 58,000 - on the first day!

However, the political gains were significant. With her international standing enhanced, Thailand was present at the Versailles Peace Conference and was one of the founder members of the League of Nations (forerunner of the United Nations) formed after World War I.

King Vajiravudh's political objectives in World War I were realized in his lifetime. After intense lobbying and negotiations, the USA ceded her extra-territorial rights in September 1920, France in February 1925 and Britain in July 1925. King Vajiravudh died in November 1925.

Ironically all this was undone in 1942.

Thailand under the military government of Field Marshall Phibun Songkhram declared war on the Western Allies after the Japanese invaded Thailand to launch their offensive on Malaya (Malaysia), Singapore and Burma (Myanmar).

It would take another war for Thailand to restore her position with the West, the Cold War.

There aren't many visitors to the Monument to the Expeditionary Force; it's hardly noticeable in the heavy traffic. Thais prefer to pray at the monuments of former kings and shrines to gods and deities, not at war memorials. Foreigners are drawn to the Grand Palace and Temple of the Emerald Buddha.

Nevertheless, the Monument to the Expeditionary Force stands as a memorial to the airmen and soldiers who answered the call of duty of their king. They didn't realize then that the benefits to their nation went beyond the battlefield.

It's difficult to imagine what went on in the minds of the Thai soldiers when they set off to that faraway place to fight in a war that had little to do with them; a war sparked off when a Serb shot the Austro-Hungarian archduke in Sarajevo, half way round the world from Thailand.

The Monument to the Expeditionary Force is dedicated to these men. There were burnt joss sticks, a bottle of water and jasmine garlands at the monument. Someone still remembers.

Map to the monument

The most convenient way to get there is to take the Bangkok skytrain to Taksin station and board a Chao Phraya River boat at the Sathorn Pier. Get off at N 9 Chang Pier near the Grand Palace and the Temple of the Emerald Buddha.

If you're only going to Sanam Luang, remember to take the express boat (orange flag) or regular boat service (no flag). These boats stop at N9 Chang Pier (at the end of Na Phra Lan Road).

If you intend to visit other places as well, it's worthwhile to buy a day ticket for the Chao Phraya River tourist boat. Get off at Maharaj Pier, a private pier (extreme left pointer).

Please note that Phra Chan Pier (at the end of Phra Chan Road) is only forferry services to cross the Chao Phraya River.

The monument is open to visitors every day.

For other attractions in the old city, see Rattanakosin. 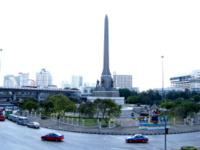