Sanam Luang
the royal field for the people

Sanam Luang or the royal field is at the heart of old Rattanakosin city where Bangkok started. It was originally used for royal cremations, hence the name Thung Pra Meru (Royal Cremation Ground), until the reign of King Rama III when the king decreed that all cremations be held outside the old city walls.

King Rama IV also changed the name of the field to the more auspicious present name. 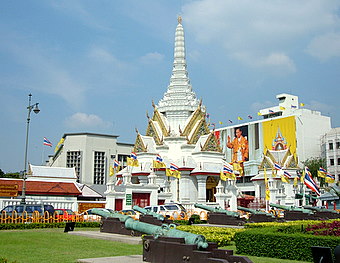 Famous buildings surround the royal field; the Grand Palace and Temple of the Emerald Buddha to the south, the National Museum and National Gallery to the north, the Supreme Court, the City Pillar Shrine and Ministry of Defense to the east with its battery of old cannon on the front lawn. 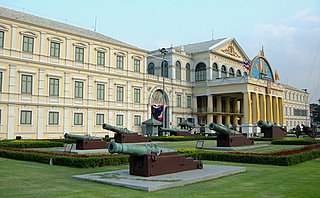 The Ministry of Defence* - the cannon museum

* Most of the offices in the MInistry of Defence have moved to new premises near Impact Arena, Muang Thong Thani in Nonthaburi, north of Bangkok. Only some offices remain. I understand there are plans to convert this building to a museum.

Today, the royal field is a place for a variety of activities, fairs and cultural festivities, political rallies and a place for the ordinary people to gather during the weekends.

The field is particularly active during the March – April period at the start of the hot season. Sports activities include the popular kite flying, takraw games and Thai boxing.

Kites in a myriad of colors are on display for sale. Fanciful kites in various shapes and designs like satellites and air balloons are launched as part of the sports festival.

A picnic atmosphere pervades Sanam Luang as families gather on straw mats under the shade, share a meal together and watch the colorful kites stream by. 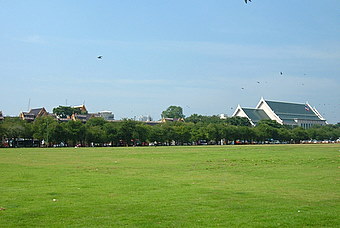 The Royal Ploughing Ceremony on 07 May to mark the start of the planting season takes place on this field. The royal oxen are brought out to plough the field symbolically and to provide an omen for the coming season.

Seeds for the royal experimental farm are sown and farmers rush onto the field to grab a handful of these seeds to return to their farms.

In December, as temperatures cool down in a month of prolonged celebrations, the field is a scene of fairs and festivities.

People gather to celebrate the King's birthday on 5th, Constitution Day on 10th and to usher in the New Year on 31st.

Once in four years when the national elections come around, intense and vociferous political campaigning takes the place of merry making on the field.

Massive rallies draw tens of thousands of ardent supporters from the competing parties.

As the hot season hits Thailand, temperatures in Bangkok soar to 33 degrees Celsius and above. This is also the season for kite flying. The Thailand Annual Kite Festival usually takes place at here in March.

When political temperatures rise with the blazing heat, Sanam Luang is also the center of political rallies and massive demonstrations.

Pigeons flock to the western stretch of the walkway around Sanam Luang, oblivious to the merry-making or acrimony on the field. If you enjoy feeding pigeons, vendors hawking their wares around the field sell bird feed.

Sanam Luang, the popular attraction with both tourists and Thais, is the focal point of many historical, cultural and political activities reflecting the life of the ordinary folk in Bangkok. 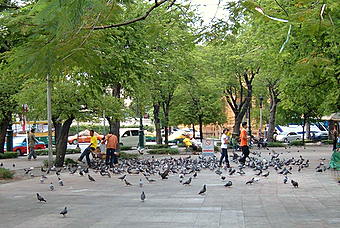 You can take a Chao Phraya river boat to N8 Tien Pier or N9 Chang Pier depending on which end you prefer to go to first.