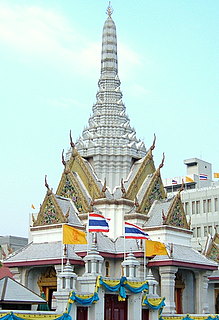 Lak Muang or the city foundation pillar was raised on 21 April 1782 when King Rama I established Bangkok as the capital of Thailand.

In accordance with Thai custom, the city pillar was raised and blessed before construction on the Grand Palace, the Temple of the Emerald Buddha and the rest of the city commenced.

The original site of the city pillar was at the southwestern corner of Sanam Luang. However, rumor has it that on the day the pillar was raised, four snakes crawled under the shrine and were killed.

Soothsayers interpreted this as an ominous sign that Bangkok would only last as the capital for 150 years.

Please see the map to the City Pillar Shrine

In the reign of King Rama IV, these rumors were promptly squashed.

Well-versed in astrology, King Rama I chose an auspicious date to rebuilt the city pillar on a more auspicious site.

On 05 December 1853, the city pillar was rebuilt in the southeastern corner of Sanam Luang, across the road from the Grand Palace, where it remains to this day. 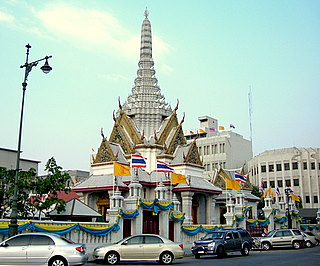 Lak Muang or the City Pillar Shrine consists of a square building with openings on all four sides. In the center of the room are two gold pillars and six elephant tusks. The roof has three levels of ornate gables on each side and a dazzling white multi-tier square spire. 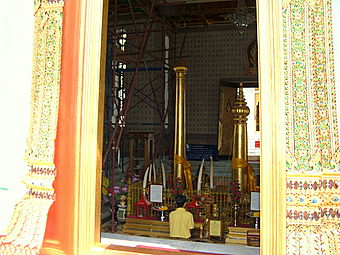 Inside the City Pillar Shrine

King Rama I also included three guardian angels for the new capital city shrine. Two of these guardian angels are in the Theparat Shrine, just to the right of the main shrine as you enter from Lak Muang Road.

At the center of the City Pillar Shrine complex is a simple shed with an altar where it's usual to see devotees pray and make offerings of food and flowers. To the side is a huge table laden with food and four bowls of holy water for people to wash hands and faces. 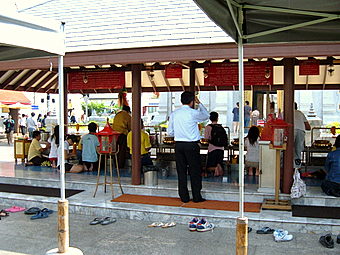 Praying at the altar

At the other end of the garden is another building also with an altar where others can be seen praying. Traditional dancers can be seen performing on a nearby stage as part of the thanksgiving ceremony. 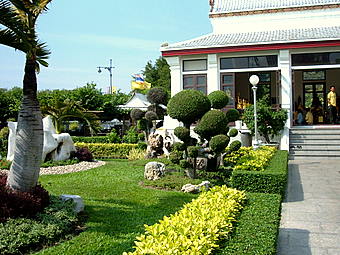 Garden with prayer building in the background

Take a rest under the shady sala or pavilion and watch the ceremonies and proceedings. As an auspicious place, it's customary for residents to come to the shrine to make wishes.

When their wishes come true, they reciprocate with prayers and offerings of food and flowers.

From the number of devotees and food at the shrine, many wishes must have come true.

Lak Muang or the City Pillar Shrine represents the foundation stone of Bangkok, the start point of the city and the Rattanakosin era.

It's the origin of a capital city and a dynasty that's more than 220 years old!

The City Pillar Shrine has undergone a major facelift to restore the national monument to its former glory.

This is the first major restoration work in 20 years. Over the years, corrosion and deterioration has caused the shrine to be a dilapidated state. The work was completed in February 2007. 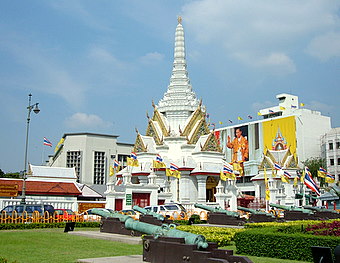 
Map to the City Pillar Shrine

Sao Lak Muang is at the south-eastern corner of Sanam Luang. Take a Chao Phraya river boat to N9 Chang Pier and walk straight out along Na Phra Lan to get there.

Other attractions in Rattanakosin 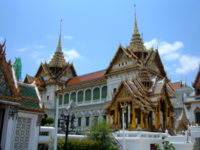 Monument to the Expeditionary Force 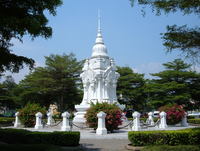 
Other attractions in Rattanakosin

Monument to the Expeditionary Force