Muang Boran just outside Bangkok, is an outdoor museum in Samut Prakan covering 96 hectares or 240 acres with scaled models or replicas of ancient city ruins and historical monuments from various parts of Thailand.

This outdoor museum preserves the past architecture, art and culture of the different regions in Thailand with ruins and monuments located in an area in the shape of the map of Thailand.

Intensive research was done to ensure authenticity in the reconstruction of these structures. Where the originals were destroyed, reconstruction relied on historical records.

The area in Muang Boran or the Ancient City covers 600 rai (96 hectares or 240 acres, 1 rai = 1,600 sq m or 0.4 acres). There are 116 scaled models or replicas of ancient ruins, monuments, buildings and structures that sum up the ethnic and cultural heritage of Thailand. Some of the exhibitions are creative designs to symbolize religious beliefs and concepts.

The Ancient City offers a cross section of Thailand in one location that can be covered in a day.

This project is the brain child of Khun Lek Viriyaphant, the man who was also responsible for the Erawan Museum in Samut Prakan and the Sanctuary of Truth in Pattaya.

Our journey through Muang Boran starts from the south as we drive up the narrow neck of peninsula Thailand. This old market town was our first stop. 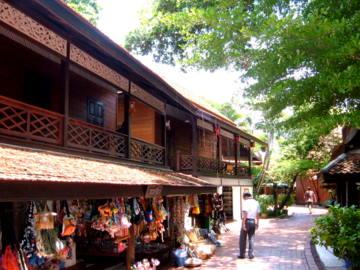 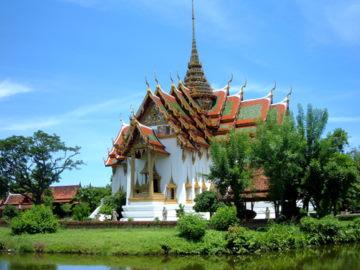 Going up the central region, we stop at Sanphet Prasat Palace in Ayutthaya which was burnt to the ground in 1767 when the Burmese destroyed the city. Only the brick base of the palace remains today. 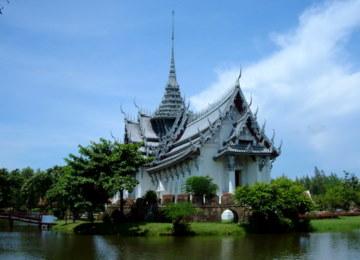 Rising from the ashes of Ayutthaya

This replica was reconstructed based on archeological and historical records.

The cluster of buildings in this floating market was removed from the original site and rebuilt in Muang Boran. There are several restaurants here and it’s a pleasant place to stop for a meal. 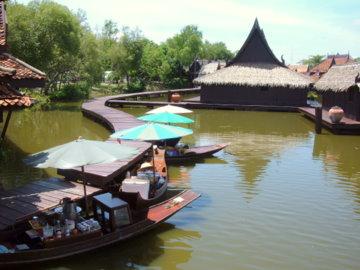 Continuing north, we reach Sukhothai. During the reign of King Ramkhamhaeng (1277 – 1317) citizens who have suffered injustice can approach the Bench of Public Appeals for redress by ringing the bell to seek an audience with the king. 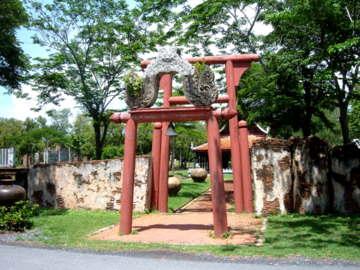 The bell of appeal

King Ramkhamhaeng was also credited with starting the first Thai alphabet in 1283.

Noen Prasat consists of the ruins of an old palace in the Sukhothai era. It was discovered in 1824 in the reign of King Rama III. The display in Muang Boran is a duplicate of the original. 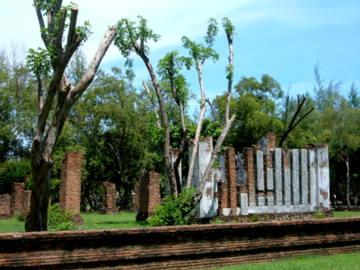 Here are two scaled models of ruins in Wat Maha That in Muang Boran on a scale of 1:4 to the originals in Sukhothai. 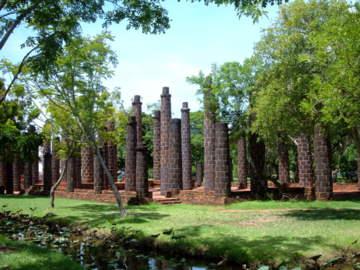 Grand Hall of Wat Maha That 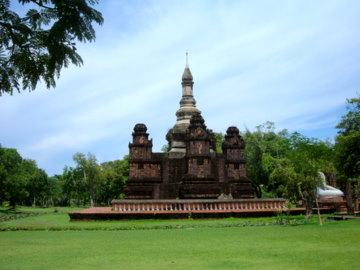 Main chedi of Wat Maha That

The western sector of Muang Boran consists of creative designs to represent religious concepts and beliefs. 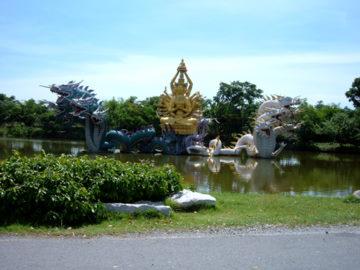 Kuan Yin the Goddess of Mercy

The Pavilion of the Enlightened symbolizes the story of 500 monks from different cultural backgrounds who attained Nirvana. It’s a stunning structure. 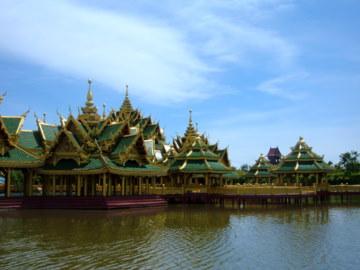 Pavilion of the Enlightened

Our journey through Muang Boran continues north to Lamphun which used to be the city state of Hariphunchai, an old kingdom in the 7th C.

Chedi of Cham Thewi was constructed during that period and named after Princess Chan Thewi the first ruler who reigned for 54 years. In the 13th C, Hariphunchai was incorporated into the Lanna kingdom in Chiang Mai. 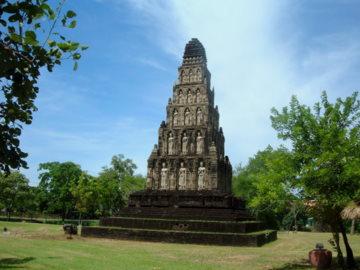 Wat Chong Kham in Lamphang, another northern province near Chiang Mai, is a Shan temple made of teak and in Pagan architecture. 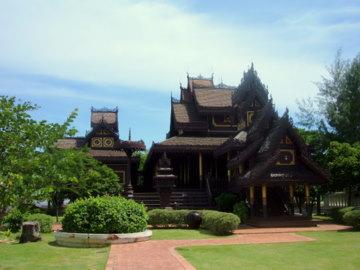 In the north eastern region of Muang Boran, we encounter ruins of the old Khmer Empire (6th – 15th C) which covered parts of present day Cambodia, Laos, Thailand and Vietnam.

The Khmers will long be remembered for their architecture and sculpture mainly in stone. The splendour of Angkor Wat comes to mind. However, there are several ancient Khmer ruins in Thailand too.

The four ancient Khmer ruins mentioned below are found in north eastern provinces, three of which border Cambodia.

We start with Prasat Phimai in Nakhon Ratchasima (Korat) built in the 11th C AD. The temple has a distinctive feature; it faces south east, the direction of Angkor, instead of east like other Khmer temples. 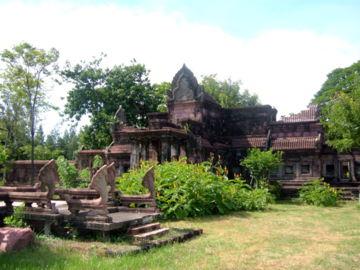 Prasat Phimai is linked to Angkor by an old route through the mountains taken by travelers and pilgrims in ancient times. 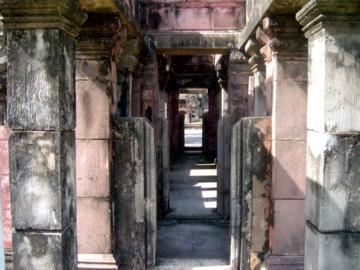 Through the narrow passageway

The temple was restored from 1963 – 1969 with technical assistance from the French team who restored Angkor Wat. 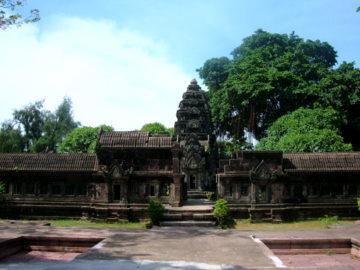 Continuing eastwards we come to Prasat Phanom Rung in Buri Ram which was built from 10th - 13th C AD on an extinct volcano. The monastery is dedicated to Shiva. 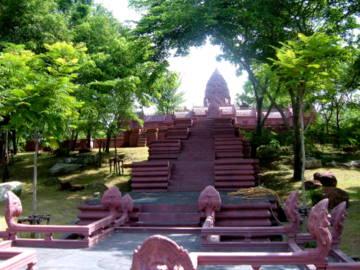 The long way up

I visited Prasat Phanom Rung in 2001 and to the best of my memory this scaled model looks very much like the original in Buri Ram. However, the model appears to have a reddish tone whereas the original version is of a lighter shade. 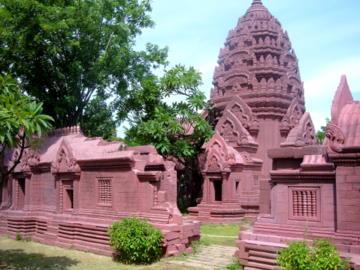 These five 32 m high pagodas of Prasat Sikhoraphum in Surin were built in the 12th C. The monument is the pride of the province which is also famous for its annual elephant roundup. 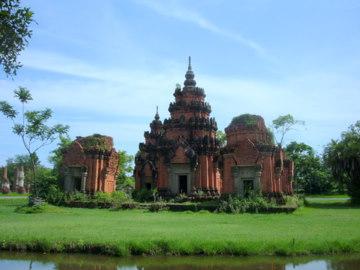 The pride of Surin

Our last stop Muang Boran is the Prasat Phra Viharn (Preah Vihear) in Si Saket which is currently hitting the headlines. This 9th C temple, dedicated to Shiva, is 900 m long built along a north south axis instead of facing east and sits on a hill 600 m high. However, these ancient ruins are not in Thailand but in Cambodia. 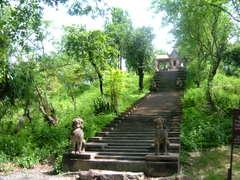 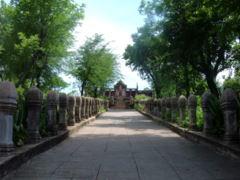 On the way up

The temple has been at the centre of a long running border dispute between Thailand and Cambodia. In 1962 the International Court of Justice at The Hague awarded the temple to Cambodia. However no decision was made on the surrounding disputed area. 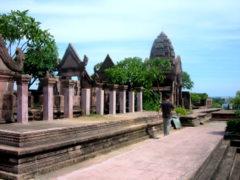 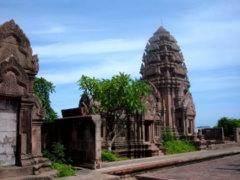 This issue became a festering sore in relations between the two countries and blew up in July 2008 when UNESCO designated Prasat Phra Viharn as a World Heritage Site. 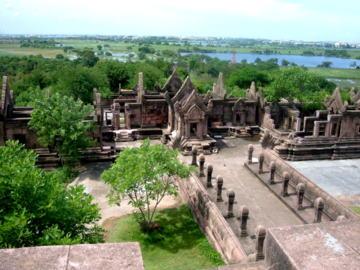 In 2009 there were exchanges of fire and skirmishes between the two sides. At the time of writing this, the temple is closed to the public. So the closest you can get to this temple is the scaled down version at Muang Boran. 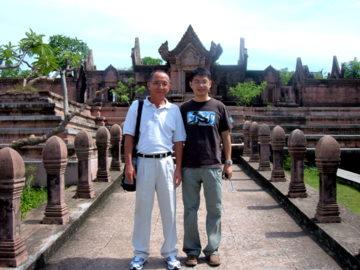 With my buddy Boon Ping (r) at the top

With that we end our journey through the Ancient City and we leave the way we came, through the south. Muang Boran reflects the vision and creativity of a man who has preserved the rich cultural heritage of Thailand in a novel way. It’s a legacy that lives on long after he is gone.

I’ve used the satellite map version to bring out the terrain features of the Ancient City area. The extent of the area is as shown in the blue outline. That gives you an idea of the size.

If you are not driving, a fast and convenient way to get there is to take the Green Line (BTS Sky Train Sukhumvit Line) to the terminal station at E23 Kheha. Then take a taxi there, it's about 3.5 km.

What I found disappointing is that unlike Erawan Museum, which is under the same management, the Ancient City has a dual pricing policy.

Foreigners are charged 300 baht for adults and 150 baht for children.

If you drive in it’s 300 baht per vehicle per entry.

Other projects by Lek Viriyapant