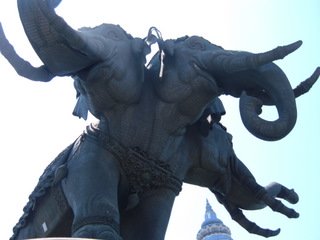 The Erawan Museum stands as a landmark in old Sukhumvit Road on the stretch leading out from Bangkok to Samut Prakan, a huge 30 m high three-headed elephant atop a domed building with elaborately carved gables and ringed in by a white wall that looks more like the ramparts of a fort.

This unusual structure is the brainchild of Lek Viriyapant who had a vision of preserving his personal collection of Thai art for posterity. He pursued this by retaining Buddhist and other relics within the country to foster cultural tourism with the most unusual architecture.

Construction of the museum started in 1994 and was only completed in the early 2000s. The centerpiece, of course, was the 250 ton three-headed elephant called Erawan to be hoisted on the domed roof.

What is the allure of Erawan?

Please see map to the museum

The legend of Erawan

Erawan is the Thai name for Airawata the holy elephant which emerged from the Garuda's egg shell as Brahma read the holy hymns. This great white elephant with 4 tusks and 7 trunks became the steed of Indra, the god of thunder and war.

Thais believe that Erawan has 33 heads. For practical purposes and simplicity, the statues of Erawan are shown with three heads. However, there is no mention in Hindu mythology of the elephant having 33 heads or even three.

But it's on record that Indra is also chief deity or the lord over 33 gods. Could this be the source of the belief as the mythology passed from one culture to another?

The Erawan Museum mustn't be confused with the Erawan Shrine in downtown Bangkok. That shrine is dedicated to Brahma. The shrine was named after the old Erawan Hotel (currently Grand Hyatt Erawan Hotel) which built the shrine to ward off bad luck.

Symbolism of the Erawan Museum

The architecture of the Erawan Museum and the sections within the building were designed to represent Hindu mythology on the structure and characteristics of the universe; representing the Three Worlds.

The underworld or Naga world

Housed in the basement of the Erawan Museum, the underworld contains a fine collection of Chinese vases in the Ming and Qing dynasties, the famous Sangkhalok pottery from Sukhothai, Benjarong ceramics and Chakri tea sets.

Other antiques there include old chairs and cabinets from the early Rattanakosin period and a Shiva statue in Khmer design from the Angkor Wat period.

Earth or the human world

Earth or the human world represented by the main hall above featured more displays of ceramics, neilloware and jade as well as Western pottery.

The Viennese and Victorian vases looked rather out of place in this setting. Craftsmen were still working on the designs on one of the pillars in the hall.

Two staircases studded with porcelain wind upstairs on either side of the hall, virtually the stairways to heaven, passing the altar of Kuan Yin, the Goddess of Mercy, on the way up. 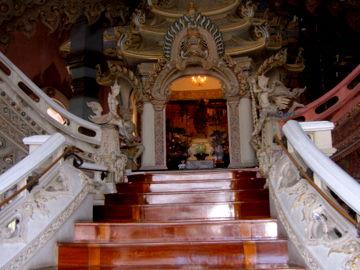 High above the main hall, the stained glass ceiling beneath the dome is etched with a map of the world, the stars and the zodiac symbols. 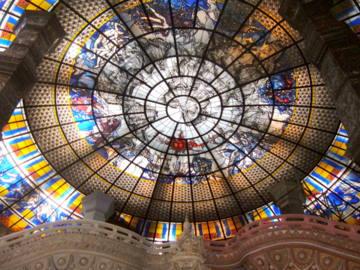 In Hindu mythology, Mount Meru, the center of the universe, is located somewhere in the Himalayas, high above Earth.

At the apex of Mount Meru is Tavatisma where Indra astride Erawan rules over 33 gods.

We were taken up to Tavatimsa inside the giant elephant above the dome of the building.

The elephant is hollow, lightning conductors run through the four legs, the left rear leg houses the lift, the right rear leg a spiral staircase and the tail the fire escape!

A small window in the elephant's belly gives an aerial eye view of the museum grounds. 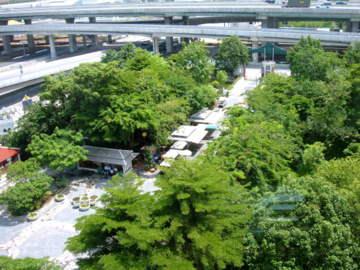 View from the top

It took a long and dizzy walk up the spiral staircase housed in the elephant's right rear leg to a floor on the upper section of the elephant which houses some of the oldest Buddha statues in Thailand. Symbolically, this is Tavatisma, where the gods reside. 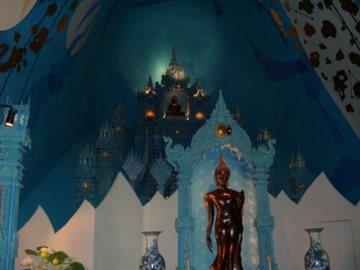 Altar in the roof

The Loburi sculpture, the only one in wood, is already showing signs of cracks and stains of age. The rest are in bronze or sandstone.

Outside the main building worshippers pray before an altar with smaller versions of Erawan while others float off lotus flowers on a pond by the well-kept garden.

The Erawan Museum is also a place of worship for the Thais.

The Ancient City or Muang Boran further down the road and the Sanctuary of Truth in Pattaya are similar creations by the same man, Khun Lek Viriyapant; present day efforts to recreate lost culture and traditions and to preserve them for posterity.

To the casual visitor, the museum with the three-headed elephant may appear garish or gaudy at first glance.

But if we are to reexamine the objectives of the museum which are to preserve and retain Thai art and culture on Thai soil as a heritage for subsequent generations in a structure that symbolizes the Thai cosmos, its purpose is fulfilled.

The Erawan Museum has to be seen in this light.

Map to the Erawan Museum

The museum in Sukhumvit Road as it leads out of Bangkok city into Samut Prakarn province. The city limits are at Soi Sukhumvit 107 (Soi Bearing).

Two air-conditioned bus services from the city pass this stretch of Sukhumvit Road.

Or you can take the Green Line to E17 Chang Erawan Station and take a taxi to the museum. It's about 1 km away.

Other projects by Lek Viriyapant 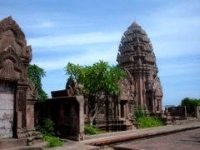