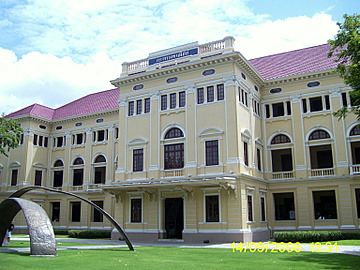 Museum Siam, a new Bangkok attraction, presents a few thousand years of Thai history in a new and innovative style that enhances a visitor’s museum experience in Bangkok.

Housed in the former Ministry of Commerce building in Sanam Chai Road in the old city, the museum has 16 rooms of exhibits spread over three floors.

Special features of the Museum Siam

This Bangkok museum however, is a museum with a difference.

It’s the newest museum in Bangkok but covers a very old aspect of Thailand history.

The concept of this museum is education through self discovery.

Audio visual displays with interactive touch screens allow visitors to find out for themselves.

Visitors are permitted to handle some exhibits or even try them on. 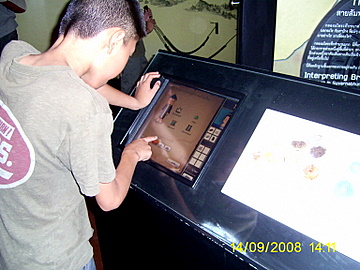 Presentations are in Thai and English and photographs are allowed in the museum.

Here are some of the highlights. Start your tour of the Museum Siam on the ground floor theater where you can view a video of modern Thailand with flashbacks to the ancient past. So begins the search for the Thai identity.

The first leg of your historical journey starts on the third floor.

Just where is this Golden Land?

Suvarnabhumi the golden land is the general region covering what is present day Myanmar, Thailand, Vietnam and South-east Asia. 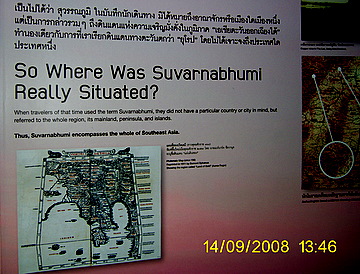 Who were the early inhabitants in this region?

There was a time 200 million years ago when dinosaurs roamed the earth, some of them lived here. Dinosaur fossils have been found in Khon Kaen and several other parts of North-eastern Thailand.

Half a million ago years ago, Lampang man walked the earth here. The area has progressed from the Stone to Bronze and Iron Ages. Ancient relics from this period have also been discovered in Thailand.

Here are some displays of prehistoric tools in the Museum Siam found in Lopburi province, 150 km north of Bangkok. 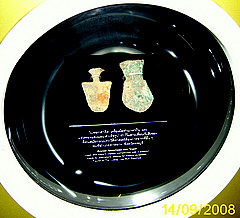 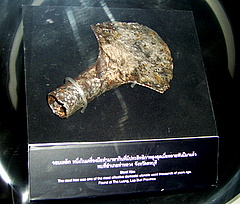 There was no mention of Bangkok in the early documents. This was because the area where Bangkok stands today was underwater!! The coastline 2,000 years ago was much further inland.

The early belief was animism, the belief that a soul or spirit existed in inanimate objects like trees and rocks. Then Hinduism made its entry long before the introduction of Buddhism. Though a predominantly Buddhist society today, Thai beliefs today are a blend of all three.

Languages were a rich mixture of Malay, Indonesian, Thai, Lao and Chinese. Little wonder that there are several words in the Thai vocabulary today that are very similar to Chinese and Malay.

As Suvarnabhumi straddled the trade routes from India to the Far East, many traders stayed behind in the area enhancing the ethnic and cultural enrichment. 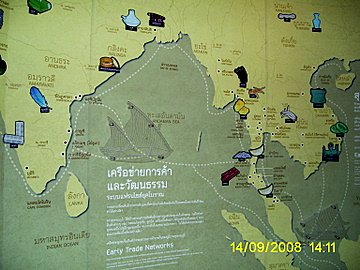 An interesting relic displayed at the Museum Siam is an old Roman coin bearing the head of Emperor Antonius Pius (138 – 161 BC) which was found in the southern province of Krabi. 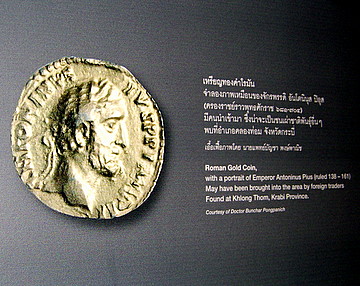 Though rice was the staple diet, the people then were nomadic hunters who ate wild rice. Cultivation didn’t start till 4,000 years ago.

As the Golden Land prospered, city states emerged as centers of trade and power. Some grew while others fell. Ayutthaya was one city-state that prospered.

Trade with flourished with China, India, Persia, Japan and Europe. The communities in the city were a multi-cultural melting pot. 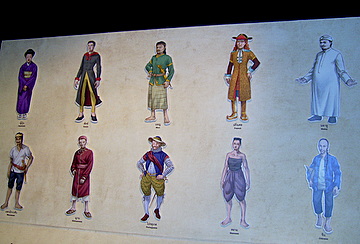 This last room on the third floor of the Museum Siam depicts the close of a golden era.

After 400 years, the golden era of Ayutthaya came to an end.

Shaken by constant power struggles between the ruling families, the city state was further weakened by rivalry between other Siamese city states.

This was the death knell for the once great city state.

In 1767 Ayutthaya was besieged and attacked by the Burmese. After the fall, the city was thoroughly sacked and destroyed.

This 3-D presentation of the assault on Ayutthaya by the Burmese vividly portrays the tragic end. 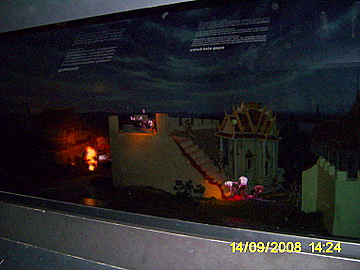 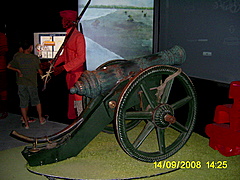 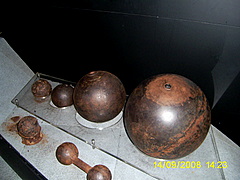 It has been upgraded to fire non-destructive “unconventional munitions”! Virtual cannonballs at charging soldiers on a screen at the press of a button. A great hit with the kids. 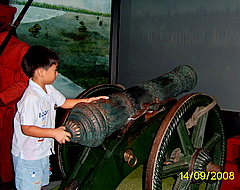 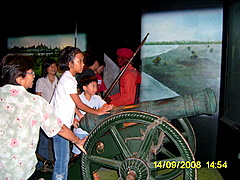 For the next part of our historical journey, we move down to the second story of the Museum Siam.

The first room on the second floor of the Museum Siam displays old maps of Ayutthaya, old Siam and the first modern map of Siam. 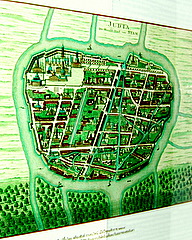 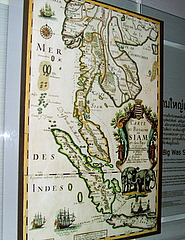 In 1880 Siam territory was under intense pressure from the colonial ambitions of Britain and France. As a defensive measure, the Siamese government engaged James McCarthy, a British surveyor from India, to delineate the Siamese borders.

McCarthy started work in 1881 and produced this map in 1897, the first accurately surveyed map of Siam and her dependencies. 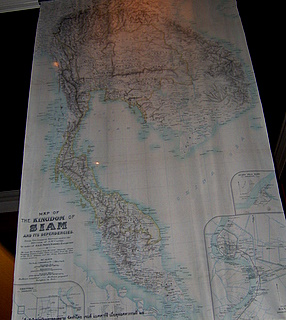 After the destruction of Ayutthaya in 1767, the Siamese center of power moved to Thonburi, just across the Chao Phraya River from Bangkok. The capital remained in Thonburi from 1767 – 1782 before it moved to Bangkok.

The establishment of Bangkok as the new capital was the dawn of a new era under the Chakri kings. Bangkok was rebuilt in the image of Ayutthaya to restore the glory of former capital.

Here’s an image of early Bangkok captured in a water color by George Finlayson in the reign of King Rama II. 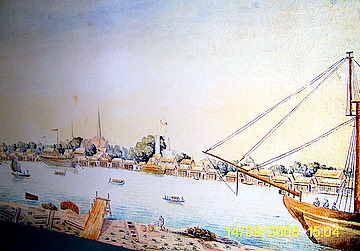 Finlayson, a Scottish surgeon and naturalist, was a member of the goodwill mission from the Governor-General of Bengal to the courts of Siam and Cochin China in 1821.

Exposure to the West brought the benefits of technology and modernization. Telephone communications, telegraph, typewriter and rail travel made their entry to Thailand. 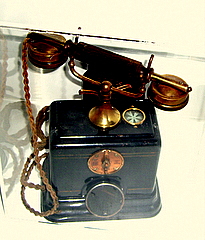 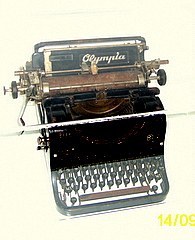 Trends in dress changed as well. Like to see how you’d look like in the fashions of those days? Like this young lady trying on the head gear? 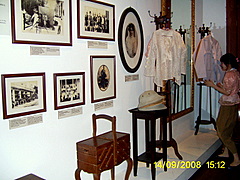 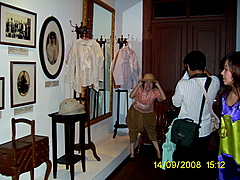 Thailand is largely an agricultural country. As rice is the staple food, the rice fields form the rice bowl of the nation and a major source of exports as well.

This makes Thailand the world’s largest exporter of rice. The Thai strain of fragrant jasmine rice is a favorite of consumers in South-east Asia. 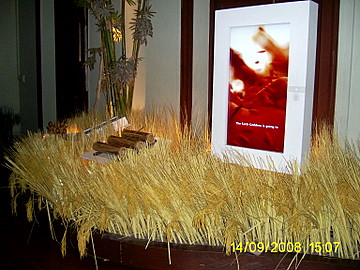 Museum Siam presents rural life in Thailand with scaled down versions of rice fields and a model of village life. 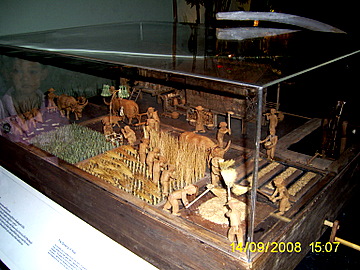 The following section covers two major political developments in Thailand during the first half of the 20th C in black and white prints. The first, a watershed in Thai history, is the change from absolute monarchy to constitutional democracy.

The second development was in the 1940s, when political radicalization reared its ugly head.

The government then leaned towards Fascism and ultra nationalism, a forgettable period in Thai history.

The final section of the museum is on Thailand today and the future.

At this stage, we leave the Museum Siam after an enriching journey through Thai history, from prehistoric to modern, with an innovative presentation.

There are three cafes in the museum, one in the garden and two within the main building, on the first and second floors, to make your visit a complete experience.

An easy way to get to the Museum Siam is to take the MRT Blue Line to BL31 Sanam Chai which is just outside the museum. While you are there, take the opportunity to snap some photos of this beautiful subway station. It's a gem!

Museum Siam is open on

For groups of five and below, the fees are:

For groups of more than five,

Admission is free for

Children below 15 years of age
Senior citizens above 60
Monks, the disabled and museum members