The 14 October 1973 uprising will be remembered as one of the darkest periods in Thai political history. It was the Day of Great Sorrow when an uprising by the people brought down a military dictator.

But the costs in terms of human lives left an indelible and traumatic scar on Thai society.

The principal characters involved were:

Thanom had taken power from Field Marshall Sarit Thanarat in 1963. In 1971, Thanom dissolved parliament and imposed one-man rule. The decade of his rule in the 1960's saw an escalation in Thai involvement in the Vietnam War. The growing US military presence in Thailand and the deployment of Thai forces in Vietnam brought on political, economic and social costs.

The early 70's was an age of growing political awareness in an increasingly educated middle-class and demands for economic progress from a society tired of a regime that had stayed too long.

The plot thickened as rivalry between various military and political factions intensified.

It was against this backdrop that the tragedy on 14 October 1973 unfolded.

The flames were stoked in June 1973 when student activists were expelled for anti-government activities.

The confrontation reached a climax in October when 13 students led by student leader, Thirayuth Boonmi, were arrested.

Students from Thammasat University massed at the Democracy Monument demanding the release of their colleagues. Workers and the general population who were equally disgruntled with Thanom rallied in support.

Estimates of number of demonstrators exceeded 200,000, the biggest public demonstration in Thai history.

Things came to a head when the student leaders who were released were rearrested. The die was cast for a bloody confrontation on that fateful day on 14 October.

When the army moved in, a massacre ensued. Students ran for their lives, many jumping for cover into nearby canals. Some sought refuge in the Royal Palace at Chitlada where the gates were opened for the fleeing students. There were tales of untold heroism as some fought back by pushing buses across roads to block tanks.

Recriminations continue to be traded between the people involved on 14 October 1973.

Conspiracy theories abound; rivals out to dispose of Thanom by manipulating the students; a plot by army rivals who instigated the confrontation to discredit Thanom.

Whatever the causes, it didn't justify the brutal use of raw military might against unarmed civilians.

It was to the credit of some military units that they refused to be involved in putting down the popular uprising.

In the aftermath of the bloodbath, Thanom, Praphat and Narong were asked to step down in the interest of national unity and leave the country.

Sanya Thammasak, the Rector of Thammasat University, was appointed as the civilian Prime Minister. A new constitution was drawn up and elections were scheduled for January 1975. There were hopes for a lasting and stable democracy.

In 1976, Thanom returned to Thailand to trigger another round of protests, an even greater tragedy and darker period in Thai political history. Again the events revolved around Thammasat University in the month of October.

Where are the protagonists in the 14 October 1973 revolution today? Thanom died in Thailand in 2004. Thirayuth Boonmi, the student leader is a lecturer in Thammasat University and still an outspoken critic on national issues.

The October 1973 spirit lives on. The 14 October 1973 Memorial stands as a monument to the sacrifice by the brave young men and women who stood up and died for a cause.

There's another memorial dedicated to those who lost their lives in October 1973. It's in the grounds of Thammasat University, just after the main gate, on the right. 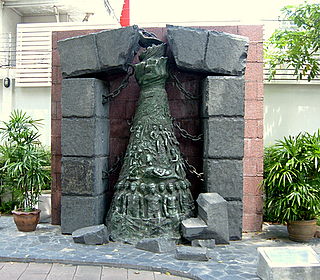 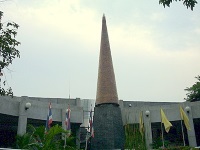