Ganesha Shrine
a prayer for success

The Ganesha Shrine stands at the other corner of Central World Plaza, Bangkok (former World Trade Center) near the Pratunam junction.

Frequently referred to as the Elephant God, Ganesha is the god of accomplishment, wisdom and wealth, the destroyer of evil and obstacles.

Ganesha is the son of Siva, one of the Trinity of Hindu gods, or Trimurti, the other two being Brahma the creator and Vishnu the sustainer.

Siva however is the destroyer.

Legend has it that Parvati, wife of Siva, created Ganesha from her perspiration and got him to stand guard at her bathing chambers to ward off the amorous Siva. When Siva was prevented from entering the bathing chambers, he cut off the boy's head in a rage.

Even Brahma, who originally had five heads, lost one when he incurred the wrath of Siva.

To console the grieving Parvati, Siva ordered his troops to return with the head of anyone found sleeping with the head pointing north. When they found an elephant and severed its head to replace Ganesha's head, the legend of the Elephant God was born.

For the location of the Ganesha Shrine. 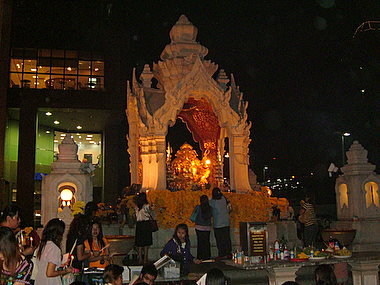 The shrine in Bangkok depicts the Hindu deity with: 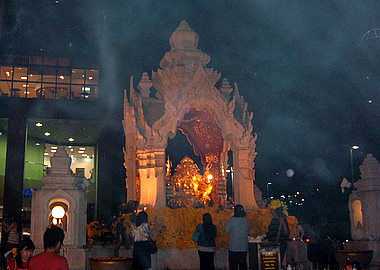 Say a prayer for success

Like the Erawan Shrine and Trimurti Shrine nearby, the worshp of Ganesha is another indication of the fusion of Hindu deities in Thai customs and rituals, inculcated over the centuries.

The faithful following is built up through word of mouth and devotees can be seen praying at the shrine at all times of the day.

As Ganesha is believed to be the god of accomplishment, wisdom and wealth, the Ganesha Shrine is the natural place to go and pray to find that elusive road to success.

Location of the Ganesha Shrine

The shrine is co-located with the Trimurti Shrine right in front of the Central World Plaza, about 300 m from the Ratchaprasong junction.

To get there, take the Green Line (BTS Sky Train). depending on where you are coming from, you can alight at Siam Interchange or E1 Chit Lom Station, then take a  walk to the shrine.