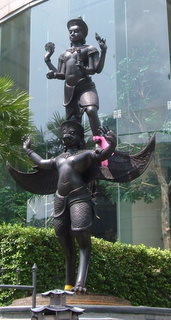 The Vishnu Shrine in Bangkok is near the busy Ratchaprasong junction that's famous for the Erawan Shrine or what's popularly known as the four-faced Buddha.

However, the junction is also well known for a host of other Hindu gods and a goddess.

Located in front of the Intercontinental Hotel near the Chidlom skytrain station, the shrine is dedicated to Vishnu, one of the major gods in Hinduism.

Vishnu, the protector and preserver of creation, is known for his nine reincarnations or avatars.

The shrine portrays Vishnu standing on the shoulders of his steed Garuda, the king of birds.

High up in neighboring Gaysorn Plaza is the Lakshmi Shrine dedicated to his consort Lakhmi.

For the location of the Vishnu Shrine.

Garuda takes the form of a half man and half bird. It has the head, beak, talons and wings of an eagle and the body and limbs of a man. The Garuda is also the royal insignia and official crest of the Kingdom of Thailand.

A man in shirt and tie is on his knees praying fervently at the foot of the shrine oblivious to the lunch crowd in the heart of Bangkok.

This scene may seem unusual to the casual visitor to predominantly Buddhist Thailand.

Theravada Buddhism, as practiced in Thailand, Laos, Cambodia and Burma, is heavily influenced by Hindu culture and mythology, the result of the close trade contacts with Southern India.

It's believed that this association goes back as far as the 3rd century, though there's more evidence of the influence of the Chola Empire in Southern India during the 9th – 12th centuries.

Images of Vishnu have been found in various parts of Thailand with the features of sculptures in the Chola period.

With such long historical links and strong influence of Hinduism on Thai Buddhism and culture, it's no surprise to find a Vishnu Shrine in Bangkok. In fact the influence of Vishnu goes beyond just the Vishnu Shrine. 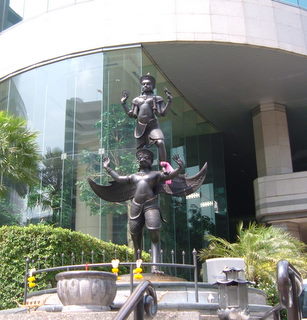 Vishnu astride Garuda in front of the
Intercontinental Hotel, Bangkok

In the Indian epic, the Churning the Ocean of Milk, demigods and demons churn the ocean of milk to obtain immortality. Mount Madura is used as the pestle with the serpent Vasukri coiled around the pestle as a churning rope.

The Wasukri Pier is where the royal barges are launched for the Royal Barge Procession. 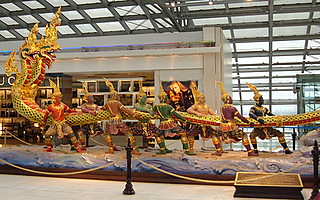 The demons at Wasukri's head

During the churning, the pestle sinks into the ocean. Vishnu appears as Kurma the Turtle, his 2nd reincarnation, dives below and allows his back to be used as a base for the pestle.

This dramatic scene, which symbolizes the perpetual struggle between good and evil, is captured in a 21 m long sculpture on display at the departure lounge on the 2nd level at Suvarnabhumi Airport. 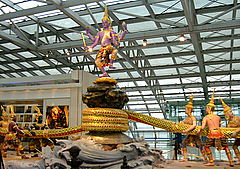 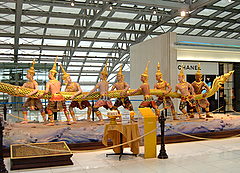 In his 7th reincarnation, Vishnu is Prince Rama in the Ramayana epic and defeats the demon Ravana who kidnaps his consort Princess Sita, Vishnu's consort Lakshmi reincarnated.

The Thai version of this epic, Ramakien (Rama Kirthi in Tamil) is depicted in the Khon or masked dance the highest form of dance drama in Thai arts.

This is another indication of how closely intertwined Thai culture is with Hindu mythology.

In each instance, Vishnu provides that divine intervention to restore balance when order in the universe is likely to be upset in the eternal struggle between good and evil.

The presence of a Vishnu Shrine could just provide that stability.

Across the street from the Vishnu Shrine is the shrine to Indra, god of thunder, storms and war, whom Vishnu eventually supplanted as the supreme god.

These shrines seem to be chosen with deliberate care to preserve that delicate spiritual balance in this famous junction that's ringed by Hindu gods and goddesses.

Location of the shrine

Take the Green Line (BTS Sky Train) and get off at E1 Chit Lom Station. The shrine is located just outside the Intercontinental Hotel with 150 m of the station.

For more on the other Hindu gods, please see Bangkok Shrines.