There are 13 Jim Thompson outlets in Bangkok, where the legend started more than 50 years ago in 1947. Over the years these outlets have grown in numbers and in the range of products.

The main store is located at 9 Surawongse Road at the Henri Dunant junction opposite the Thai Red Cross. The nearest train station is the Silom subway station. 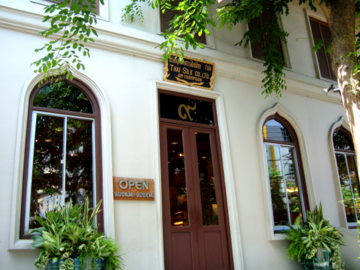 The Oriental Hotel was where Thompson started his first Thai silk store at the old wing. So it's only fitting that there's a store there now.

Royal Orchid Sheraton Hotel along the Chao Phraya River on the Bangkok bank.

Anantara Riverside Resort and Spa and the Peninsula Hotel on the Thonburi bank. 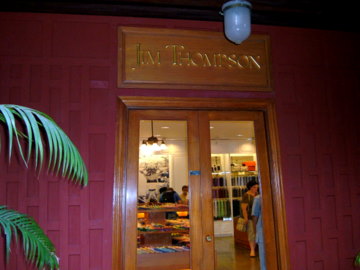 Outlet at the Jim Thompson House

Isetan Central World Plaza, near the busy junction where the Erawan Shrine is located and the Central Chitlom, the flagship of the Central group. Both these outlets are near the Chitlom skytrain station.

The Jim Thompson outlets in the Sukhumvit area

The Emporium, an up-market shopping complex along Sukhumvit Road, just next to the Prom Phong skytrain station.

Other Jim Thompson outlets in Bangkok

At Suvarnabhumi, the new international airport opened on 28 September 2006. There are not one but two outlets at Suvarnanbhumi; one at each end of the departure terminal. So no matter which gate you’re departing from, you’ll pass one of these outlets. 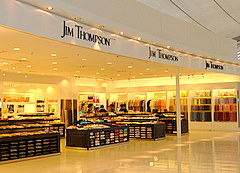 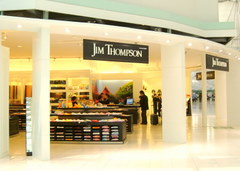 The two outlets at Suvarnabhumi with their distinct decor

Besides the retail outlets mentioned earlier, Jim Thompson also has a Factory Sales Outlet in Bangkok at Soi Sukhumvit 93.

Outlets that have closed

The outlet at Don Mueang the old airport has of course been closed. So has the outlet at Westin Grande Sukhumvit Hotel near the Asoke skytrain station.

On 1 October 2012, Don Mueang Airport re-opened for operations and there is a Jim Thompson outlet there. 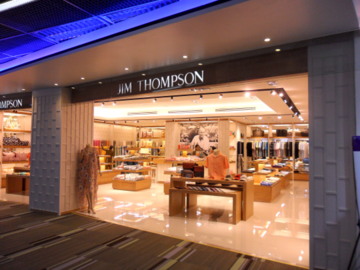 Besides selling Thai silk, these outlets in Bangkok also have two cafes and a restaurant serving Thai cuisine.

The Thompson Restaurant and Wine Bar at the Jim Thompson House. 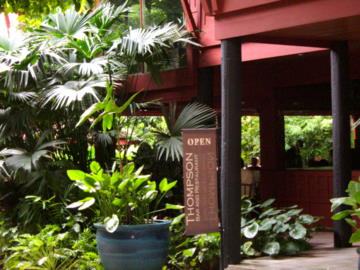 Restaurant at the Jim Thompson House

The Jim Thompson outlets in Bangkok are a legacy of the Thai silk king who left his mark in the landscape of Bangkok. For a fast and convenient way get to most of these outlets, please see the Green Line BTS Sky Train.