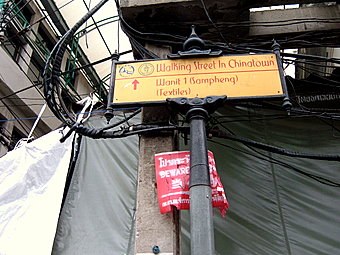 Soi Sampheng is a congested little lane off Ratchawong Road in the heart of Chinatown Bangkok or Yaowarat. This was the place where the Chinese first settled and started Chinatown. However the Chinese have been in Bangkok long before moving to this soi.

Please see map for the location.

Since the early Ayutthaya period around the 12th to 13th centuries, the Chinese have lived in a village on what is now the Grand Palace. During the Thonburi period (1767 – 1782) more immigrants arrived and the community expanded.

When King Rama I decided to establish his capital in Bangkok in 1782 and build the Grand Palace, the Chinese community was relocated to Soi Sampheng some two km downriver.

The community grew and prospered primarily through trade, like most Chinatowns in the early days.

Unfortunately, Soi Sampheng was beset with the usual problems afflicting Chinese communities in those days: opium, gambling and prostitution.

Soi Sampheng had the dubious honour of having most of the opium dens, gambling houses and brothels in Bangkok.

As these lucrative vices thrived, so did the Chinese secret societies or Triads, who moved in to control the illicit trade. Inevitably intense rivalry between gangs from the different Chinese dialect groups arose. In 1889 this conflict erupted into an all-out gang war that took to the streets.

The Royal Thai Army mounted a military operation to restore order. An infantry regiment advanced into Yaowarat as the Royal Thai Navy landed marines across the Chao Phraya to block off the escape routes to the river. The troops routed the rioters and finally restored order.

Today, thankfully these ugly aspects are gone. The area, like the rest of Chinatown Bangkok, is a thriving trading and commercial area teeming with people. The soi is so narrow that people have difficulty passing one another. 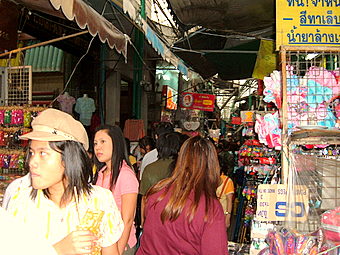 Weaving through the crowded soi

The other way of getting there is by boat to the Ratchawong Pier. From the pier walk about 350 m along Ratchawong Road till you see a narrow soi on the left with people streaming in and out. That's the only indication that there's an opening there. 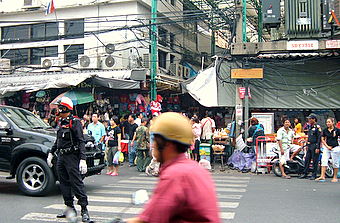 In the late 1990's, the soi was officially renamed Soi Wanit. However the locals are still familiar with the old name.

To the upmarket shopper, this soi may not be the most conducive of shopping areas. But bargain hunters would love it.

Whatever it is, it's still a worth a visit to see a way of life that was started more than 200 years ago and in many ways is still preserved.

On a recent visit to the soi, I noticed a drastic change to the soi. It was no longer hot and stuffy though just as crowded. Curious, I wandered further in and discovered that it was comfortably air-conditioned with a covered glass roof.

Besides the usual textiles for sale, there were souvenirs and all kinds of knick knacks, making shopping a more pleasant experience. 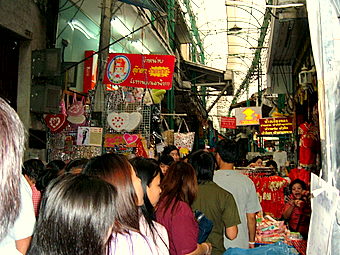 It gets more packed as you go along 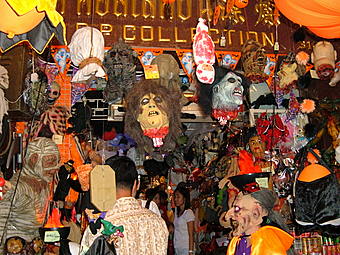 Some of the wares 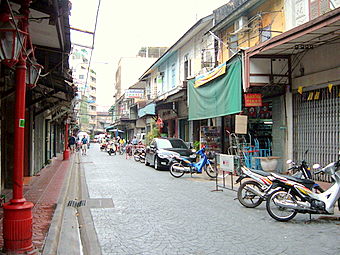 A pleasant reprieve further down the soi

Across Chakrawat Road is the start of the Saphan Han market.

Take a Chao Phraya River boat to N5 Ratchawong pier, walk along Ratchawong Road and make your choice of turning left or right.

You may not be able to complete the whole length of the market.

To return to Chinatown Bangkok.