Wat Mahabut one of the 887 temples in Bangkok, is located in Phra Khanong in eastern Bangkok.

They built a temple and named it after him. The monk's name was Phra Mahabut. 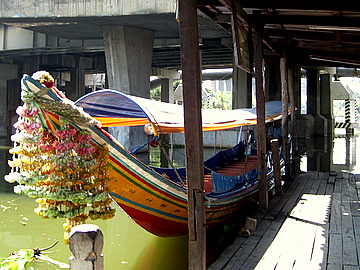 We passed tree lined banks with a mix of traditional houses, modern ones and the ever encroaching condominiums. 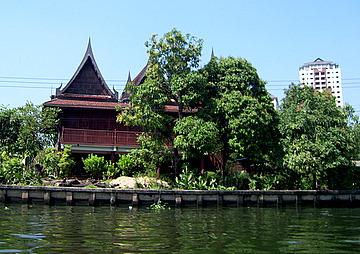 A quaint mix of the old and new

It's a side of Bangkok that people rarely see, unless they live in the neighborhood.

Please see map to the temple. 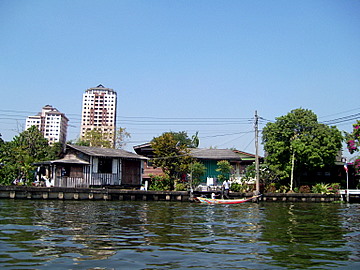 Houses by the river

The area is quiet and laid back, with an idyllic rustic charm. You don't even feel like you're in Bangkok. Here people row boats to visit their neighbors. 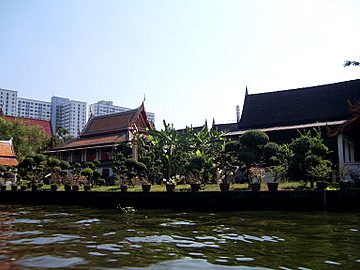 At Wat Mahabut, I got off at the temple pier.

Unlike the other temples in Bangkok, Wat Mahabut isn't renowned for its historical legacy or its ancient architecture. It's famous for a ghost, a female ghost, the legendary Mae Nak who has virtually become a household name in the community and beyond. 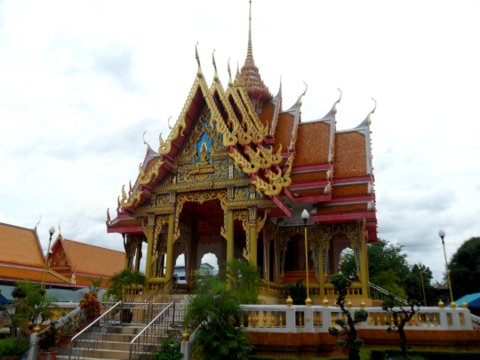 One of the attractive buildings within the temple 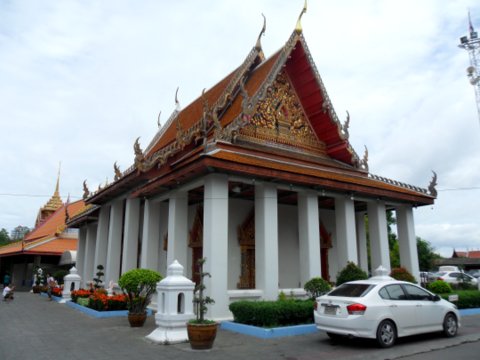 Even the other name for Wat Mahabut is Wat Mae Nak Phra Khanong, Temple of Mother Nak of Phra Khanong.

In the old days, it was customary for women even young ones to have their names prefixed with “Mae”, even though they may not be married or mothers. This practice continued into the early 20th century.

The legend of Mae Nak

When the legend started is uncertain. The period ranges from the mid 18th century Ayutthaya period to the 19th century Bangkok era. However, this has no bearing on the legend which goes like this.

Mae Nak, a native of Phra Khanong, marries the handsome Mak. When war breaks out, Mak is conscripted for military service and leaves his pregnant wife behind.

In the war, Mak is severely wounded. Meanwhile, Mae Nak dies during childbirth with her unborn child and is buried by the neighbors. This is unusual as Buddhist custom calls for the cremation of their dead.

When Mak recovers from his injuries, he returns home to an emotional reunion with his loving wife and baby son, not realizing what has happened.

Neighbors who try to warn him meet with a grisly end. Things remained this way until he discovers that he's actually living with the ghost of his wife!

He flees but she pursues him and the romance turns to horror. Mak seeks refuge in Wat Mahabut but Mae Nak follows him there. After several attempts by the terrified villagers, Mae Nak is finally exorcised to return to the other world and leaves Mak alone.

One version has it that the abbot of Wat Mahabut captured Mae Nak's spirit in an urn and threw it into the Phra Khanong canal. 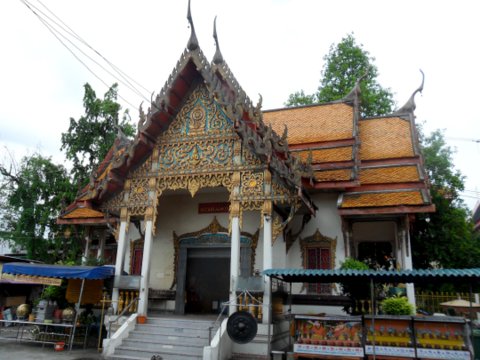 The viharn on a quiet day

There are several various versions about how this was done. What is memorable is the tearful separation as the ghostly wife finally departs from her husband. The macabre tale ends in heart-rending sorrow. 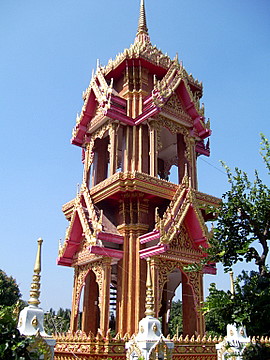 The bell tower with photos of the deceased

Several movies have been made of this legend since the 1950s to thrill the horror movie lovers. The latest remake is as recent as 2005. In the movie versions, the ghost is sometimes known as Nang Nak (Mrs Nak). There's also a TV drama series and even an opera on this legend.

Years ago when I first heard of this story, I thought it was just that, a story, the work of an imaginative writer with an added twist of Thai folklore.


For sheer originality, the tragic tale of Nang Nak's unrequited love for a mortal surpasses the Hunchback of Notre Dame and the Phantom of the Opera.

I didn't realize then that the belief is so fervent that there's actually a shrine for Mae Nak on the grounds of Wat Mahabut where she finally departed from this world.

What's more the community has accepted her as their benefactor. How this fearsome ghost became benevolent is difficult to explain.

The Mae Nak shrine is in a small wooden building by the canal. Her portrait hangs on the wall behind the altar. A draped statue of her pasted with gold leaves is on the altar that's filled with garlands and lit candles. Visitors pray at her shrine for her blessings of good fortune and safety. 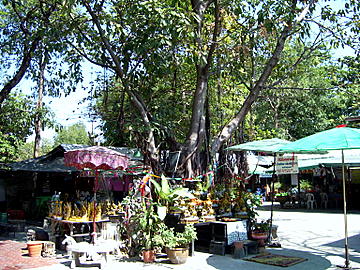 The shrine is behind the shed to the left

Colorful lengths of cloth are coiled round the huge tree in the courtyard where rows of fortune tellers sit. The presence of lottery vendors gives an indication of what many are seeking. 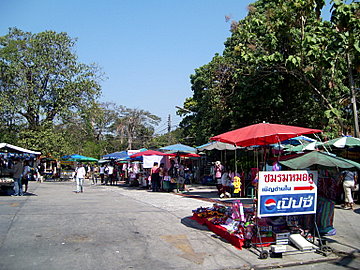 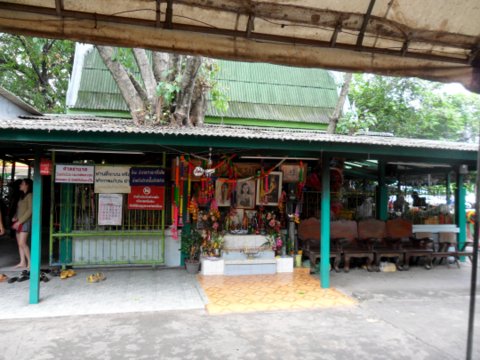 The building with the Mak Nak Shrine

Please note that photographs are not allowed inside the shrine. 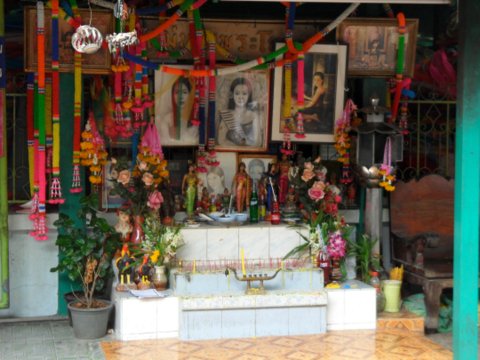 Altar outside the shrine

Young men due for the ballot in Thailand’s selective military conscription pray at the Mae Nak Shrine not to be drawn for the draft. As Mae Nak was separated from her husband by military conscription, she has been known to answer the prayers of some of these young men.

The legend of Mae Nak has become a proud heritage of the Phra Khanong community. In 1997 a change in the municipal boundaries placed Wat Mahabut in the neighboring Suan Luang district. This has caused much unhappiness in Phra Khanong. 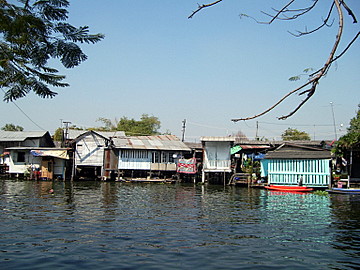 Old community across the Phra Khanong from Wat
Mahabut

A municipal councilor is lobbying the Bangkok city authorities to realign the boundaries to bring the temple and the legend back to where they belong, in Phra Khanong.

Folklore and legends all over the world are based on what the people choose to believe. Wat Mahabut is irrevocably linked to the legend of Mae Nak and nothing can change that.

Will Wat Mahabut be restored to Phra Khanong?

There's been a twist to this proposal to revert Wat Mahabut to the Phra Khanong district. This matter was discussed in a city council committee meeting on 4 July 2007 during which some members disagreed with the proposal to revert to the original boundaries.

They argued that the Mae Nak legend was mere folklore and had nothing to do with the district's history.

Furthermore they suspect that the move had more to do with a hidden political agenda, a ploy in gerrymandering, rather than a genuine attempt to restore a cultural legacy to Phra Khanong.

The proposal to revert to the pre-1997 district boundaries would transfer about 20,000 people back to Phra Khanong district, a former TRT (Thai Rak Thai Party, the former ruling party) stronghold.

The change might tip the balance in favor of the Democrat Party in the next General Elections, as it was a Democrat councilor who proposed this change.

It's a pity that an old temple that gave rise to a romantic though gruesome legend should be implicated in a political tussle.

Whatever the outcome of this controversy, it's unlikely that it could have any impact on Wat Mahabut, the Mae Nak Shrine or the fervent believers who worship there everyday. 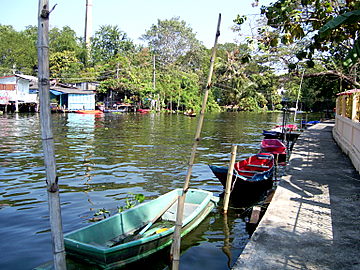 You can get to this temple by two means:

To get to the Phra Khanong area:

Take the Green Line (BTS Sky Train Sukhmvit Line) to the E9 On Nut Station which is nearer to Soi Sukhumvit 77. If you're going by boat, On Nut is also slightly nearer to the Phra Khanong Pier.

Or you can take a taxi from the station to the temple.

Two air-conditioned bus services from the city pass this stretch of Sukhumvit Road.

If you're taking the river boat, alight from the bus just before the Phra Khanong Bridge. If not get off after you've past Soi Sukhumvit 77 and take a taxi to the temple. 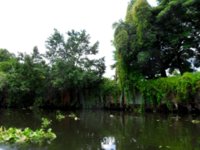 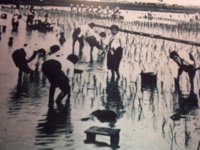