Jim Thompson (1906 - 1967) an American and an architect by profession first came to Bangkok as a member of the OSS (Office of Strategic Services, the forerunner of the CIA) in September 1945, just as World War II ended.

It was originally planned for Thompson to parachute into Thailand to link up with the Seri Thai or Free Thai underground and prepare for the Allied invasion of Thailand.

But the abrupt surrender by the Japanese after Hiroshima and Nagasaki ended the war and gave him the luxury of landing in Bangkok Airport.

He was briefly the OSS station chief in Bangkok and reestablished the US Embassy after which he returned home for his military discharge.

In 1946, Jim Thompson returned to Bangkok. This was to be the start of an adventure that was to leave a legacy in Bangkok and the rest of Thailand.

There was another American OSS officer, a Naval Lieutenant, who was to parachute in with Thompson. His name was Alexander MacDonald. Like Thompson, MacDonald returned to Thailand after his military service.

Being a journalist by profession before the war, MacDonald started the Bangkok Post, one of the two English dailies in Thailand.

Thompson's connection to Thailand went back a long way. His maternal grandfather, General James Harrison Wilson met the Crown Prince Vajiravudh (who later became Rama VI) in England during the wedding of King George V in 1893.

When Crown Prince Vajiravudh visited the USA, he requested for General Wilson be his guide.

As a child, Jim was exposed to the old photographs and stories of his grandfather hosting a garden party for the Crown Prince Vajiravudh. That was his first exposure to faraway Thailand.

On his return to Bangkok, Thompson was briefly involved in the reorganisation of the legendary Oriental Hotel. Later, he took an interest in the ailing Thai silk industry which was largely a small-scale cottage industry.

He toured the silk producing regions extensively to learn about the source of the raw silk, studied the silk weaving process, the finished products and examined the prevailing state of the industry.

In the course of these visits, Thompson covered the north-eastern region of Thailand or Issarn frequently. As a result, he developed a close attachment to the people there. In the 1950s he visited a community of silk weavers in Pak Thong Chai 300 north-east of Bangkok.

Four decades later, his name would make its presence there.

In 1947, the Thai silk industry was in the doldrums. Over the last 40 years, it was battered by the competition from the textiles mills of the developed West, the economic depression and later, World War II.

Most of the weavers had given up on the trade and switched to other means of living. Thompson persevered and finally found a Cham Muslim community of Thai silk weavers living in the village of Ban Krua by the Saan Saab Canal. This discovery had two fortunate results.

Firstly, it helped revived Thai silk weaving. Secondly, through his frequent visits to Ban Krua, he noticed a piece of land across the canal from the village. This was to be the birth of another brilliant idea, as we shall see later.

Thompson managed to persuade some of these weavers to start weaving some samples for him. In 1947, he brought the completed samples to America and convinced Vogue the fashion magazine to publish an article, which took the fashion world by storm.

Subsequently, the Thai Silk Company was started in 1948 and the weaving of Thai silk commenced in earnest. In time the outlets expanded and today there are Thai silk outlets in Bangkok, Chiang Mai, Hua Hin, Pataya, Phuket and Samui.

These are the Jim Thompson outlets in Bangkok. 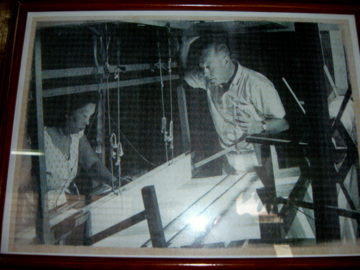 Thompson with one of his weavers - courtesy of
Khun Niphon Manuthat


There are also showrooms and distributors in major cities in every continent. In addition, the cuisine of the Jim Thompson Restaurant & Bar is available in Bangkok, Kuala Lumpur, Singapore and Tokyo.

Soon his name became a household word for Thai silk and fashion.

For his untiring efforts in reviving the Thai silk industry, Jim Thompson was awarded the Order of the White Elephant, an award to foreigners for exceptional service to Thailand.

Inspired by the scenic beauty of the land across the canal in Ban Krua, Thompson developed the idea of building a traditional Thai house on that land by the canal.

He had such houses from various parts of Thailand brought to Bangkok and reassembled into a showpiece in traditional Thai architecture.

As soon as he moved in, the Jim Thompson House quickly became a center of social activity for the gregarious American from Delaware.

In 1967, Thompson went for a holiday in the Cameron Highlands, Malaysia.

While he was out on a jungle walk, he vanished without a trace and all efforts to find him were in vain. His disappearance remain an unsolved mystery to this day.

What we can be sure of is that Jim Thompson left behind a legacy in the Thai silk industry with the numerous silk outlets in Thailand and the world. The Jim Thompson House still stands today in memory of his efforts to preserve Thai architecture and art.

The Jim H W Thompson Foundation set up after his disappearance is dedicated to the preservation of Thai art and culture.

In 1988 the Thai Silk Company set up the Jim Thompson Farm with its own mulberry plantations and silk worm production to ensure a reliable and high quality supply. The 240 acre farm is in Pak Thong Chai, Korat about 300 km north-east of Bangkok.

The raw silk is supplied to a factory in Pak Thong Chai which weaves the high quality silk products for the retail stores world-wide.

Later in 2001 the farm opened its doors to public visits during the cool season at year’s end. Besides silk production, the farm has expanded to nurseries, orchards, gardens and hydroponic cultivation.