The Lat Krabang Museum, located in the grounds of Wat Sutthaphote, is a Bangkok community museum featuring the culture, festivals and way of life of the Mon people who live in Lat Krabang, Bangkok.

Lat Krabang is a district at the eastern end of Bangkok just north of the Suvarnabhumi Airport.

The district was originally called Amphur Saen Saeb (Saen Saeb district) which was administratively under Minburi province and not Bangkok.

In 1925/26, the Director-General of the Ministry of Interior pointed out that the name wasn’t appropriate for the area as the Saen Saeb Canal doesn’t even pass through the area.

*Districts in other provinces are called amphur whereas districts in Bangkok, khet.

To get there, please see map to the Lat Krabang Museum. 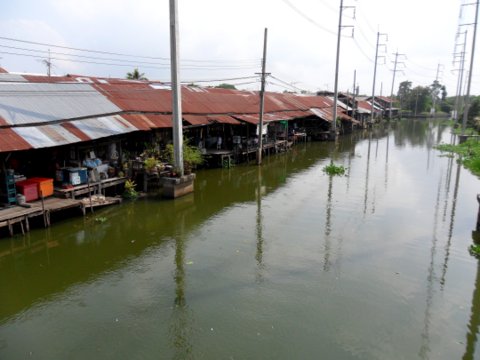 People back then travelled by boat through a network of 70 canals linking to the main Prawet Burirom Canal. The area was mainly agricultural, large parts of it still are today.

Three main communities live in Lat Krabang; the Mon, the Muslims and the Buddhist Thais.

The Mon who originated from western China were the early inhabitants of the area that is now Myanmar, north-eastern and central Thailand as far back as 1,000 years. In the 6th century, a Buddhist civilization Dvaravati developed in central and north-eastern Thailand.

This civilization was strongly associated with the Mon and many of the religious relics discovered later had inscriptions in the Mon language. 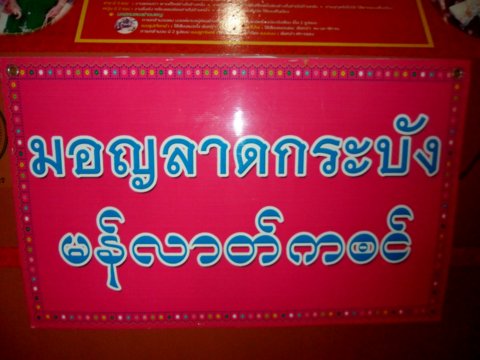 "The Mon of Lat Krabang" – first line is in Thai, the second is in the Mon language

In the 9th century, the Mon established their kingdom in the city of Pegu (present day Bago in Myanmar) east of the Irrawaddy delta and Yangon. In 1757 Pegu was destroyed by Toungoo, a city kingdom 300 km to the north.

This must have resulted in more migration to Thailand. In the reign of King Rama I (1782 – 1809), many Mon fought on the Siamese side in the Burmese-Siamese wars.

Today the Mon are living in various parts of Thailand with the main concentrations in Lat Krabang in Bangkok, Phra Pradaeng in Samut Prakarn and Bang Kradi, Bang Khun Thien in Bangkok.

The Mon have over the generations retained their special culture and festivals which are still practiced today. Let’s take a look at some of these festivals in the Lat Krabang Museum.

A major making merit ceremony is undertaken on the first Sunday after the end of the Buddhist Lent in Thailand which is usually around October on the full moon of the 11th lunar month.

The ceremony has a very special feature, the monks arrive by traditional Thai boats, ruea mard. 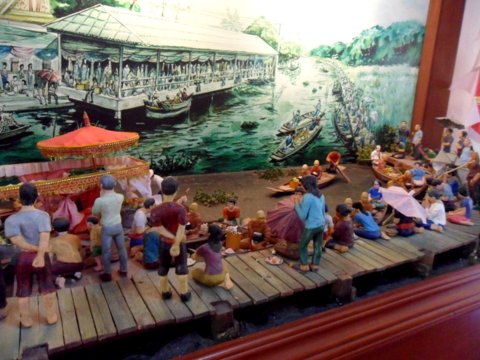 The monks are transported in 61 of these boats while the people wait on the banks of the canal to offer candles, flowers, incense, food (cooked, uncooked or processed) and drinks.

After the alms giving early in the morning, there will be traditional boat races along the canal and other water sports.

The Mon celebrate Songkran on a different day from the rest of Thailand. Officially Songkran is celebrated on 13th – 15th April each year. The Mon Songkran is a week later.

There is a colorful procession with Mon dressed in their ceremonial costumes to take part in hae hong tung takhab along Klong Mon (hae – procession, hong – a mythical swan that’s also the symbol of the Mon, tung takhab – colorful banners that look like centipedes). 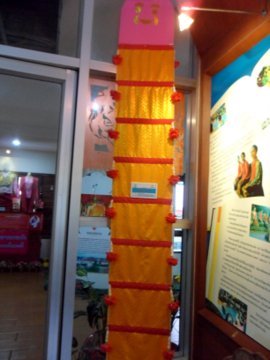 The procession makes its way to Wat Sutthaphote in the afternoon. In the evening, games will be played to continue with the celebrations.

Here’s a picture of the beautiful Mon ceremonial dress in the Lat Krabang Museum that’s worn on special occasions like Songkran. 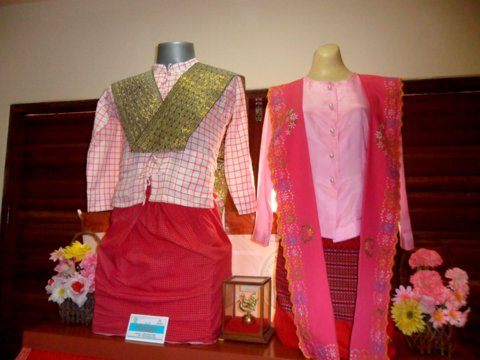 Ceremonial dress of the Mon

During festive season, the Mon have some strange games involving communication with the spirits of ancestors, like phi kradung, phi ee ju. These games are played 10 days before and after Songkran.

For example, in phi kradung , a kradung or winnowing basket to separate rice grain from the chaff is used.  A huge kradung like the one in the picture is called kradung Mon. The person hugs the kradung as the spirits are called upon. 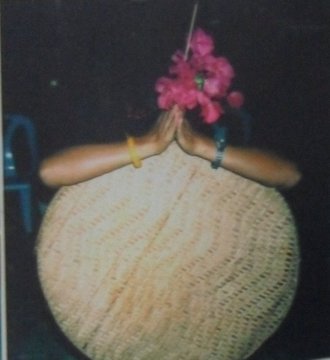 In phi ee ju, two bamboo fish traps (ee ju) are dressed up to look like scarecrows and those playing the game sit around these figures and invite the spirits to enter the figures. 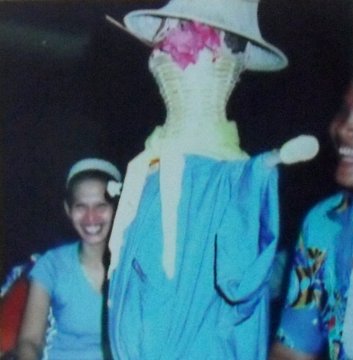 From the smiles on the faces of the participants, it seems to be an enjoyable game. 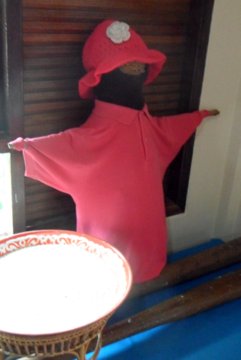 Mock-up of the ee ju in the museum

The traditional Boat Museum is to the rear of Wat Sutthaphote near the canal. The boat shed holds 130 boats made from carving out the trunk of a species called takian or Hopea tree, a tree with very hard wood. 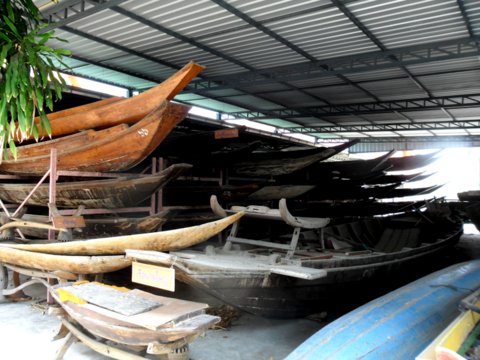 The boats in storage

Of these 76 are ruea mard, the boats used in the annual alms-giving. The others consist of a variety of boats called ruea chala, ruea mu, ruea pong etc. Some of these boats are more than 100 years old.

As these boats are stacked up, it’s difficult to view their structure. This chart gives a clear picture of the shapes of the different boat. The ruea mard is the boat on the left in the second row. 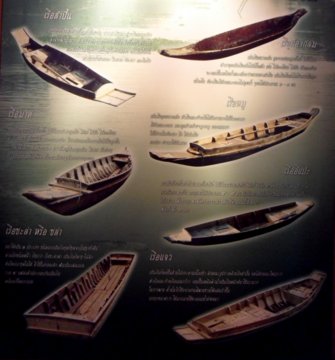 Map to the Lat Krabang Museum

From there take the Airport Rail Link to the Lat Krabang Station, then take a taxi to Wat Sutthaphote.

The fare is around 70 depending on the traffic.

On the way back, the taxi will probably take the road skirting the Bangkok-Chonburi Motorway to the north as it’s a more direct route.

Closed on Mondays and Tuesdays

That wraps up our visit to the Lat Krabang Museum that preserves the culture of a very old community in an old part of Bangkok.

I would like to express my appreciation to the staff of the Lat Krabang Museum for the information provided for this article. All photos are with the courtesy of the museum. 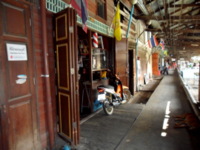