The Protestant Cemetery Bangkok
a memorial to the early pioneers 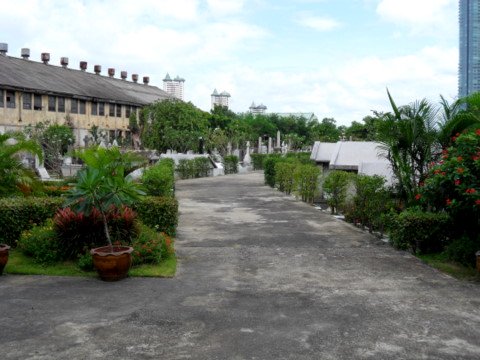 The Protestant Cemetery Bangkok is located in the southern stretch of old Charoen Krung Road and preserves the memory of some of the early foreign pioneers who lived, worked and died in Bangkok.

Though it’s called the Protestant Cemetery, some members of the Jewish community in Bangkok were also buried there. 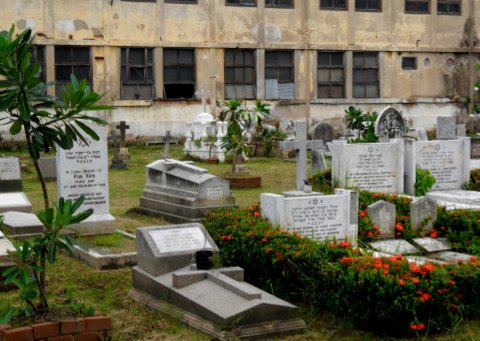 The Jewish section on the left 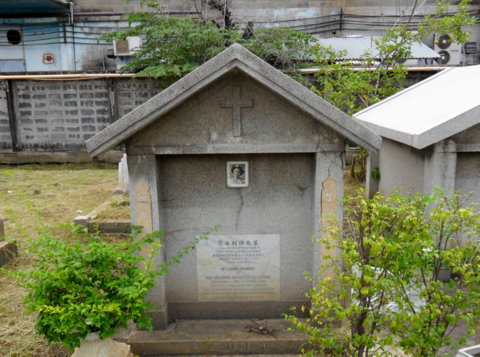 The Thai-Chinese section on the right

History of the Protestant Cemetery Bangkok

In the reign of King Rama IV (King Mongkut, 1851 – 1868), the Protestant community petitioned the king for a cemetery to bury their dead. Prior to this the Protestants had to seek permission from the Portuguese to use the Catholic cemetery.

This old Protestant Cemetery became the resting place for the early pioneers in Bangkok; doctors, missionaries and others who have contributed to the development of the city in its fledging days.

During the Fourth Reign, the foreign community also petitioned the king for a road running along the east bank of the Chao Phraya River where several embassies were located. The road was opened on 16 March 1864.

King Rama IV named the road Charoen Krung or prosperous city. In English the road was however called New Road.

The construction of Charoen Krung Road provided access to the Protestant Cemetery Bangkok by land via what is now Soi Charoen Krung 72/5 or Soi Susan Farang in Thai (su-san fa-rang, Foreign Cemetery Soi). Prior to this, access to the cemetery was probably by the Chao Phraya River.

A cemetery chapel was added in 1894. Over the years the cemetery was neglected and subject to frequent floods. This was because it was located on low-lying ground by the river and the tombstones were often under water.

Christ Church Bangkok one of the older Protestant churches was closely linked to the Protestant Cemetery Bangkok. As the large numbers of the congregation were British, the British Embassy took an interest in the condition of the cemetery.

In July 1907 a joint committee was formed between the British Embassy in Bangkok and Christ Church to administer the Protestant Cemetery.

In 1957 the dilapidated chapel was rebuilt. Later a retaining wall was built in 2003 to keep out the waters from the Chao Phraya. In recent years, two water pumps were installed to cope with the flood waters. 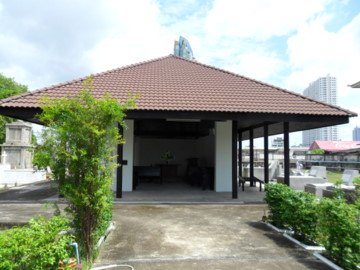 Here are some of the famous people who were laid to rest in the Protestant Cemetery Bangkok. 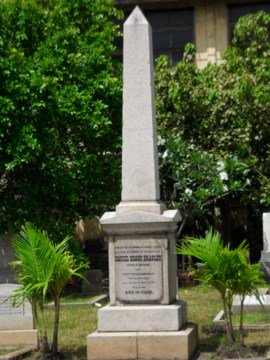 Dr. Bradley was among the early American Protestant missionaries who arrived in 1835. He set up a clinic, introduced modern medical practices including small-pox inoculation, taught English and started the first printing press in Bangkok.

The American Presbyterian Mission was later responsible for the establishment of the First Presbyterian Church in Samray, Bangkok in 1849. 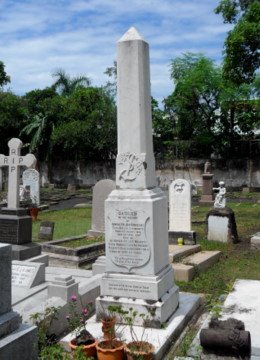 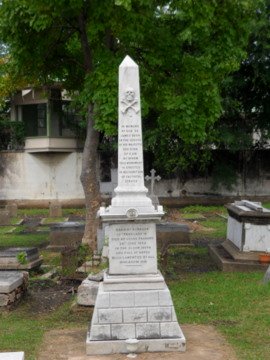 Near the grave of Admiral Bush lies another Bush, probably his son. Admiral Bush had a son who succeeded him as Harbour Master. George could well be that son as the inscription on his tombstone mentions his service to the King. 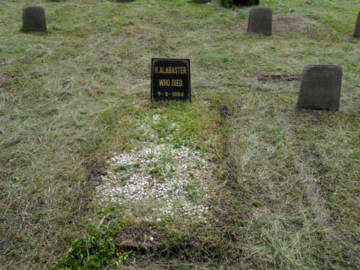 Henry Alabaster, an Englishman came to Thailand in the mid-1800s and was Adviser to the King of Siam. He will be remembered as the man who built Charoen Krung Road in 1861, the 8.5 km of road linking the Grand Palace to the foreign embassies and residences by the Chao Phraya River.

Alabaster married a Thai and was bestowed the family name of Savetsila by King Rama VI. His grandson, Air Chief Marshal Siddhi Savetsila, was a former Foreign Minister of Thailand (1980 – 1990).

A simple tombstone marks the resting place of Henry Alabaster.

He was honoured by King Rama V with a white marble monument that remains a prominent feature in the Protestant Cemetery. 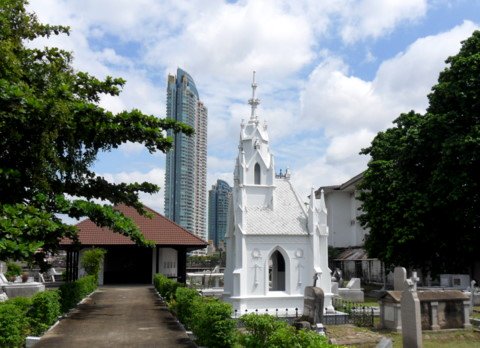 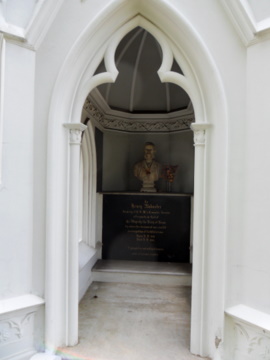 This committee consists of representatives from the British Embassy, the Danish Consulate in Pattaya and representatives of various interested parties in the Bangkok community including the Jewish community.

The Jewish community now has its own cemetery to the left of the entrance to the Protestant cemetery.

Many of the tombstones in the cemetery are so old and worn that the inscriptions are barely visible. Some tombstones are broken but others seem quite well kept even with Christmas decorations and flowers. 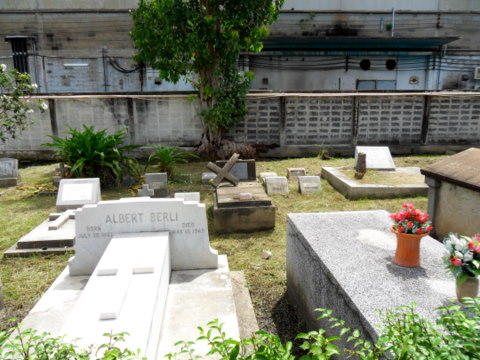 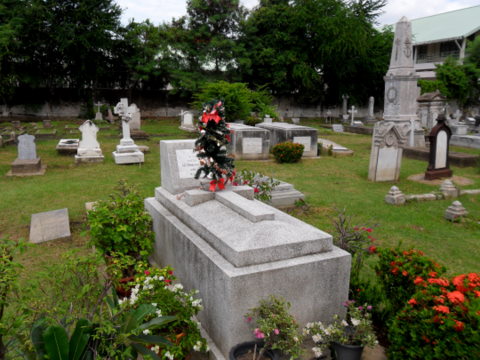 During my visit I noticed that the grass was recently cut and a group of workmen were laying wooden boards in front of Dr. Bradley’s grave, probably in preparation for a memorial service.

This old Protestant Cemetery in Charoen Krung Road continues to serve as a memorial to the men and women who have left their mark in early Bangkok. 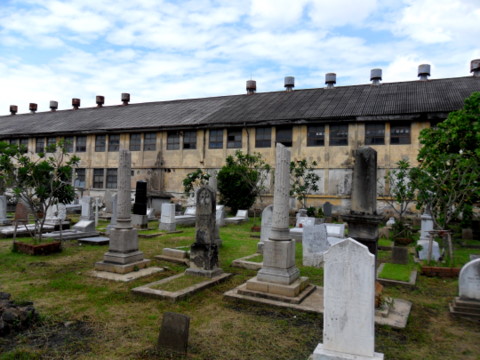 Memorial to the early foreign pioneers

The foundation was formed on 16 January 2017 under the chairmanship of Thada Savetsila, the great-grandson of Henry Alabaster who is buried in the Protestant Cemetery.

This foundation will be responsible for maintaining the Protestant Cemetery Bangkok and for providing assistance to Christian funerals for both Thai and foreigners living in Thailand.

I am also grateful to Wonwimon Chitmahawong for sending me four of the latest photographs on the Protestant Cemetery.

These new photographs are shown below under the section on "How to get there".

Map to the Protestant Cemetery Bangkok

The Protestant Cemetery is about 1.8 km away along a tree-lined pavement. It’s about a 20 minute walk along one of the oldest roads in Bangkok.

You’ll pass Wat Yannawa the boat temple along the way. Turn right into Soi Charoen Krung 72/5 and you will see the gate to the cemetery. 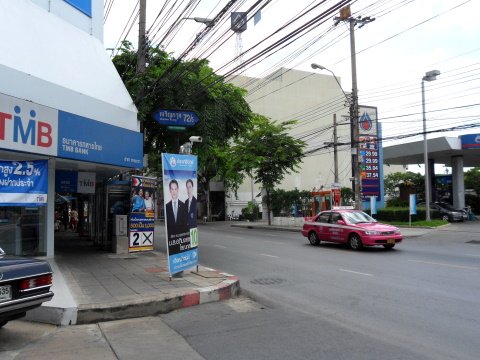 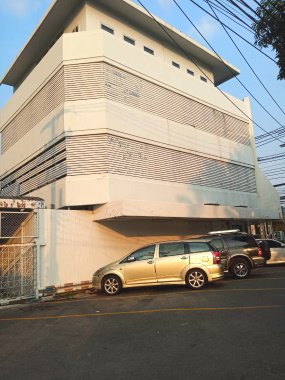 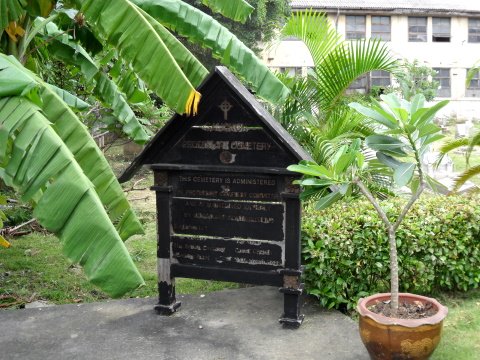 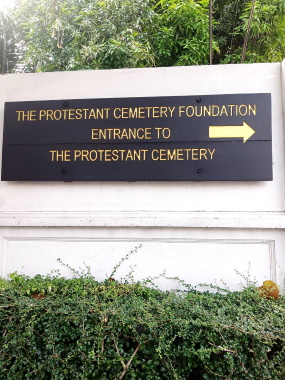 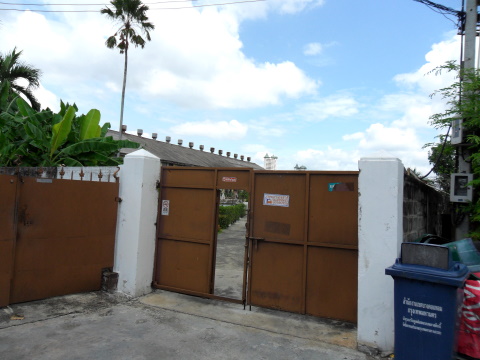 Main gate to the cemetery back in 2011 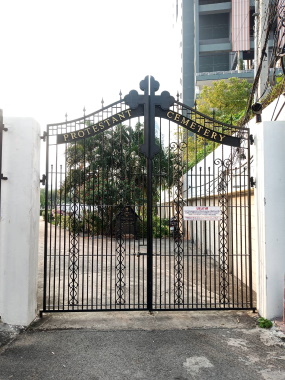 New iron gate to the cemetery 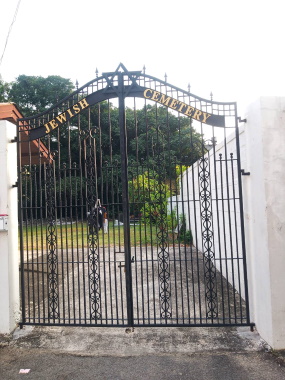 Separate entrance to the Jewish Cemetery

The cemetery is open round the clock.

My thanks to Roderick Turner of the Protestant Cemetery Committee and Gerrit Booyens, Administrator of Christ Church for their updates on the administration of the cemetery.

To return to Bangkok Churches.